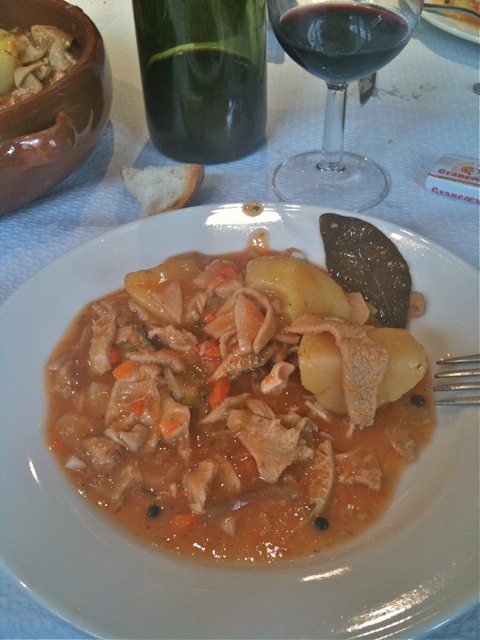 In the county of Luchon (where I was born and raised) we are really serious about Pétéram. Pétéram is an ancient local dish made from a combination of tripe (intestine & pluck), lamb  & veal feet, ham, carrots & onions. During my last visit  home I had to have my fix of Pétéram; so one Sunday, part of the family took off to the village of Oô, where the restaurant “Les Spigeoles” serves one of the best Pétéram. Jean-Pierre Oustalet, a friend & the chef-0wner of the establishment, is a very creative man always up to something fun. Recently he printed a series of t-shirts  with  the motto he coined himself: “In Peteram We Trust!”. 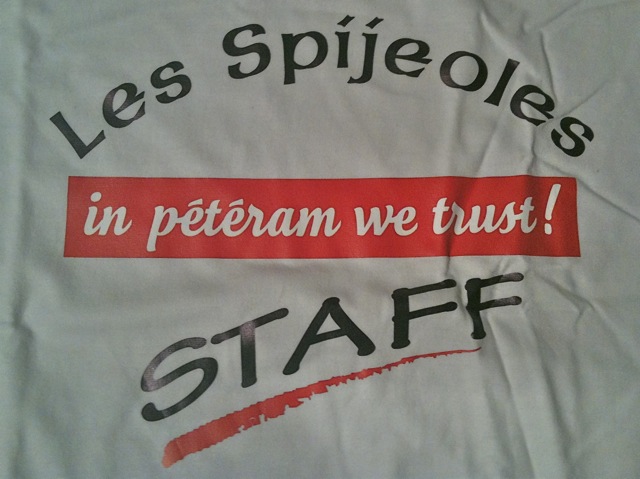 This summer a Flemish  TV from Belgium came to film Jean-Pierre’s Pétéram for one of their shows. Though the video is in Flemish & French I urge you to watch it: Touristique: de pétéram.
Tripe dishes are cooked around the world (list here), and as we know these less desired cuts were left for the poor. It was the same for Pétéram, I don’t think it appeared on restaurant menus in Luchon until the 20th century and my family restaurant was certainly one of the first to offer it. Though I don’t know the exact etymology of the word, one can read its the humble origins through the Gascon language  : petar— French translation: “crever” or in English:”to die” or “to be famished” and hame— in French “faim” or in English “hungry”.  Thus Pétéram can be interpreted as “a dish for the famished” or as a dish that will kill hunger! Then again this may be an invented etymology (much work remains to be done on the Gascon language, and especially certain of its regional versions, such as that spoken in the Luchonais.) On the other hand, to quote my husband, the poet Pierre Joris, “are any etymologies really ‘false’?”
I used to make Pétéram when I was working at the family restaurant (other posts related to the family hotel here) and though we received “clean” tripe from the butcher, the smell was still strong and the tripe would require extensive blanching in order to get rid of the offensive smell. I got used to it and it didn’t bother me, except this one time. In the late fall of 1981, I had to cut a big pile of intestines and honeycomb for my Pétéram and  that time, for some reason I was to discover a few days later, I couldn’t bear the smell. Two days later I found out I was pregnant with my son Joseph. Throughout my pregnancy I had to stay away from tripes.

Jean Pierre Oustalet’s Pétéram is as good as it gets. He achieves the difficult task of making a tripe dish light. The texture of the tripe still firm but tender. The sauce, in which the tripe have cooked for over twelve hours, release the rich and comforting aromas of all the ingredients. The creamy potatoes that have been added late in the cooking provide the perfect starching effect. Some places serve it as a first course, though we had it as a main course. We had soup to start with, then a plate of artisan salamis & cured ham, followed by the Pétéram as the main course. Then we had a slice of delicious mountain cheese, a slice of apple pie and voilà! we sure were full and happy! Below are a few pictures of the fun outing where you can see my parents : Jean & Renée Peyrafitte ( 88 and 81 years old!) in the gorgeous village of Oô. This village is also very dear to me because I premiered my performance The Bi-Continental Chowder /La Garbure Transcontinentale there in 2005. One of the reason is that one of the main Romanesque female figures featured in the show is from the village;  you can hear the song related to it here.

The recipe is a translation of the family recipe transmitted by my grandfather Joseph Peyrafitte & typed by my mother Renée Peyrafitte:

Blanch and scrape the tripes thoroughly. Cut the stomach & honeycomb in trips of about 1 x 0.5 inches. Place is all in a stew-pot with a ham bone.
Add 3 whole carrots, the bouquet garnis, 1 tablespoon of tomato paste, 1 cup of ham, 2 onions whole, salt, pepper & a touch of nutmeg. Add wine wine & chicken stock so tripes are immersed and “swimming”.
Bring it to a boil, cover the pot and let cook for 10 hours, one hour before serving add potatoes peeled and quartered.
When ready to serve add hachis and the Armagnac.

0 thoughts on “In Pétéram We Trust!”