Ninkasi: “The Lady who fills the Mouth”

I was really looking forward to be part of  “Tasting and Exploration of Yeast Culture,” an event part of the Umami Festival at the Astor Center on Friday March 12, but it just got canceled by the organizers. C’est la vie! — and it gave me the great opportunity to explore yeast, and more specifically beer & bread in Sumerian culture. As I will not be able to perform for you this time I will share my collectages on the topic.

As recorded today it looks like it is Sumer and not Egypt that would be the oldest beer producing country and the oldest beer goddess thus would be Ninkasi. She is the ancient Sumerian Goddess of intoxicating beverages, her name meaning: “ the Lady who fills the mouth”

Her father is Enki the lord Nudimmud and her mother is Ninti —or Ninursag —Queen of the Abzu. Ninkasi was one of the eight children created to heal the eight wounds of her father Enki; wounds received by eating eight forbidden plants.

So what came first: the kaš/beer (left) or the gar/bread (right)? Hard to say, but what we can read in the text below is that the bappir, that is the twice baked barley bread was stored for the purpose of beer brewing, and there are indications that it could have been eaten. It has also been suggested that the bappir could be an early form of biscotti (twice baked).

The 2800 BC hymn to Ninkasi is a fairly linear description of brewing techniques. You can  read the scholarly translation here and if you are a Sumerian scholar the transliteration here. And voilà the arrangement I made for performance purpose:

There was also Sumerian proverbs related to drinking  : 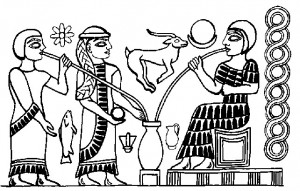 Beer drinking in Mesopotamia- Always with straws which could mean that the beverage was not  clear and needed to be sifted.

Another great song I came across is  the oldest recorded drinking song!  The found tablet is believed to have been written at the turn of the III to II millennium BC and was first studied in 1964 by Miguel Civil. (right: illustration is the Ninkasi seal) 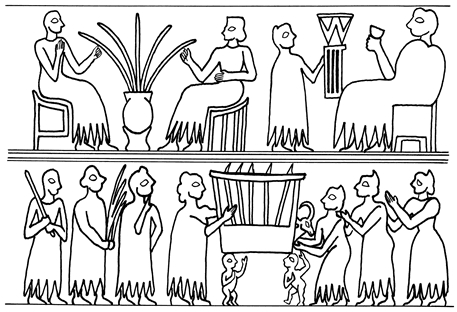 All the beautiful vessels are ready on their pot stands!
May the heart of your god be well disposed towards you!
Let the eye of the gakkul vat be our eye, and let the heart of the gakkul vat be our heart!
What makes your heart feel wonderful in itself also makes our hearts feel wonderful in themselves!
We are in a happy mood, our hearts are joyful!
You have poured a libation over the fated brick, and you have laid the foundations in peace and prosperity — now may Ninkasi dwell with you!
She should pour beer and wine for you!
Let the pouring of the sweet liquor resound pleasantly for you!

In the troughs made with bur grass, there is sweet beer.
I will have the cup-bearers, the boys and the brewers stand by.
As I spin around the lake of beer, while feeling wonderful, feeling wonderful, while drinking beer, in a blissful mood, while drinking alcohol and feeling exhilarated, with joy in the heart and a contented liver — my heart is a heart filled with joy!
I clothe my contented liver in a garment fit for a queen!
The heart of Inana is happy once again; the heart of Inana is happy once again!

The code of Hammurabi, inscribed on a basalt tablet, lays down some strict rules for the administration of beer parlors. Owners who overcharged customers were liable to death by drowning!

These pieces will be a great addition to my Sumerian repertoire, they will complement the Incantation of Innana that I have been performing for years (on my cd La Garbure Transcontinentale-The Bi-Continental Chowder). Below is a live performance of that piece for the celebration of Jerry Rothenberg’s anthology Technicians of the Sacred.  This is how I got introduced to Sumerian poetry. Merci Jerry!

Thanks to Ame Gilbert & Yael Raviv

0 thoughts on “Ninkasi: “The Lady who fills the Mouth””