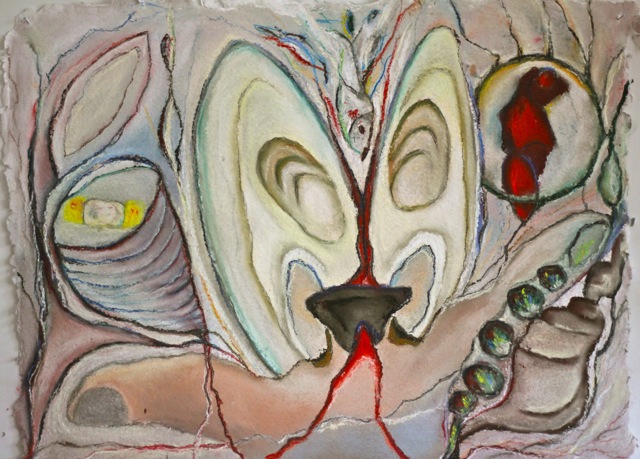 Hello to you all!
How have you been since the “Infinite Views”? I have not been able to post & you will find out why below. I hope to be able to post while in New Orleans as I would like to continue the series I started there:  Temps/Oralité #I & Temps/Oralité #II. Pierre & I will be there for a week during MARDI GRAS!  On Thursday April 23rd Pierre Joris, John Sinclair and his Blues Scholars, & I will be reading/performing at the infamous 17 Poets Series!

After the reading we will take a few days to travel to the Bayous. Pierre as been commissioned to write a libretto for a choir project coordinated by Donald Nally & involving the composers Chris Jonas, Joby Talbot & Gene Coleman.  The topic of the project is about the BP Oil Disaster, & Pierre is trying to meet with communities of various ethnicity  that have been affected by the spill.

There are two projects that have kept me away from the blog: the first one is Bi-Valve, a series of texts, paintings & recipes. The painting above is part of it. If you miss the Nola performance save the date for the New York City installment:

And the second project is cinematographic:
Late last fall I was commissioned by the Friends of Basil King to produce & co-direct with Miles Joris-Peyrafitte a 22-minute film depicting the intimacy between writing and painting in Basil King’s work, called BASIL KING: MIRAGE.
The camera will focus on drawn and written lines, and on images of his paintings that are reflections & counterpoint to a number of consequential periods in King’s life: his childhood during WWII in England, his four on-and-off years at Black Mountain College, his relationship with other writers such as Frank OʼHara and Paul Blackburn and with painters such as Jackson Pollock, Franz Kline…
Watch the 1 minute trailer  below:

The film will be premiered on September 22nd at the event celebrating Basil’s Arc: The Paintings & Poetics of Basil King. Meanwhile the Committee of the Friends of Basil King is raising money in order to finish the movie.
We made the trailer to give you a little taste of the film & if you would consider a donation (big or small — every little bit helps) you can DONATE HERE. Donors will be invited to the premiere. More info at: http://www.blog.basilking.net/

One thought on “Mirage & More”