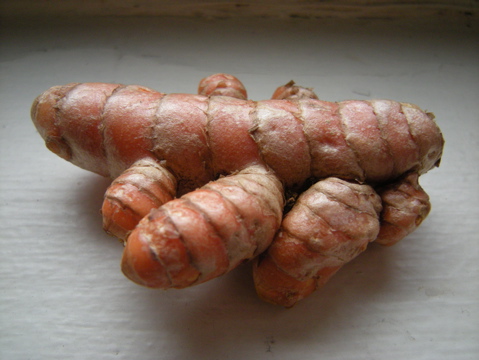 Two of my most recent posts were about turmeric (curcuma) and today this piece was posted on the ASFS List server (Association for the Study of Food and Society) by Cara de Silva via Dana Jacobi. A very scientific article on the source of turmeric’s healing power finally uncovered in U Mich lab (American Chemical Society).

Curcumin is the active ingredient of turmeric powder, a natural spice used for generations in traditional medicines. Curcumin’s broad spectrum of antioxidant, anticarcinogenic, antimutagenic, and anti-inflammatory properties makes it particularly interesting for the development of pharmaceutical compounds. Because of curcumin’s various effects on the function of numerous unrelated membrane proteins, it has been suggested that it affects the properties of the bilayer itself. However, a detailed atomic-level study of the interaction of curcumin with membranes has not been attempted. A combination of solid-state NMR and differential scanning calorimetry experiments shows curcumin has a strong effect on membrane structure at low concentrations. Curcumin inserts deep into the membrane in a transbilayer orientation, anchored by hydrogen bonding to the phosphate group of lipids in a manner analogous to cholesterol. Like cholesterol, curcumin induces segmental ordering in the membrane. Analysis of the concentration dependence of the order parameter profile derived from NMR results suggests curcumin forms higher order oligomeric structures in the membrane that span and likely thin the bilayer. Curcumin promotes the formation of the highly curved inverted hexagonal phase, which may influence exocytotic and membrane fusion processes within the cell. The experiments outlined here show promise for understanding the action of other drugs such as capsaicin in which drug-induced alterations of membrane structure have strong pharmacological effects.