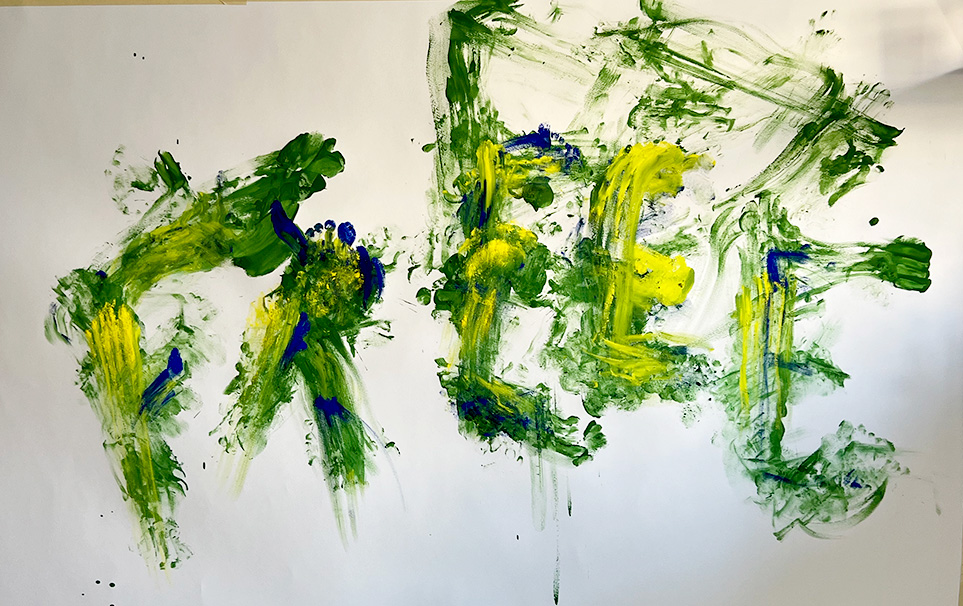 This Karstic-action piece is in solidarity with the Women of Iran. I am deeply inspired by their antediluvian strength resurfacing with force & clarity in their courageous actions.
The text I wrote & that plays over the video (with music by Miles Joris-Peyrafitte) is loosely based on a Hymn to Inanna attributed to the Mesopotamian poet Enheduanna, the earliest known named author in world history —c.23rd century BCE —.
Thank you to Sepideh Jodeyri for your activism & relentless work on relaying our support to our Iranian sisters. You prompted this action painting and I am so grateful you did.
May freedom & peace prevail.

Oh ! Oh ! Oh ! Women of Iran
Oh ! Oh ! Oh ! Women of Iran
ante diluvian women
fighting for you rights inscribed in the Mes
our influence is mighty
your roaring makes the world tremble
your courage rings around the earth
your persistence is formidable
all of you Enheduanna
all of you high priestesses of freedom
I deeply admire you
you exercise full ladyship over heaven and earth
let me praise your ways
let me praise your greatness
let’s call on Innana goddess of heaven & earth  to power your quest
may a whirlwind of freedom be the only mandatory garment on your hair
don’t be tired sisters
don’t be tired sisters
Khasteh nabâshid
Khasteh nabâshid
Merci! 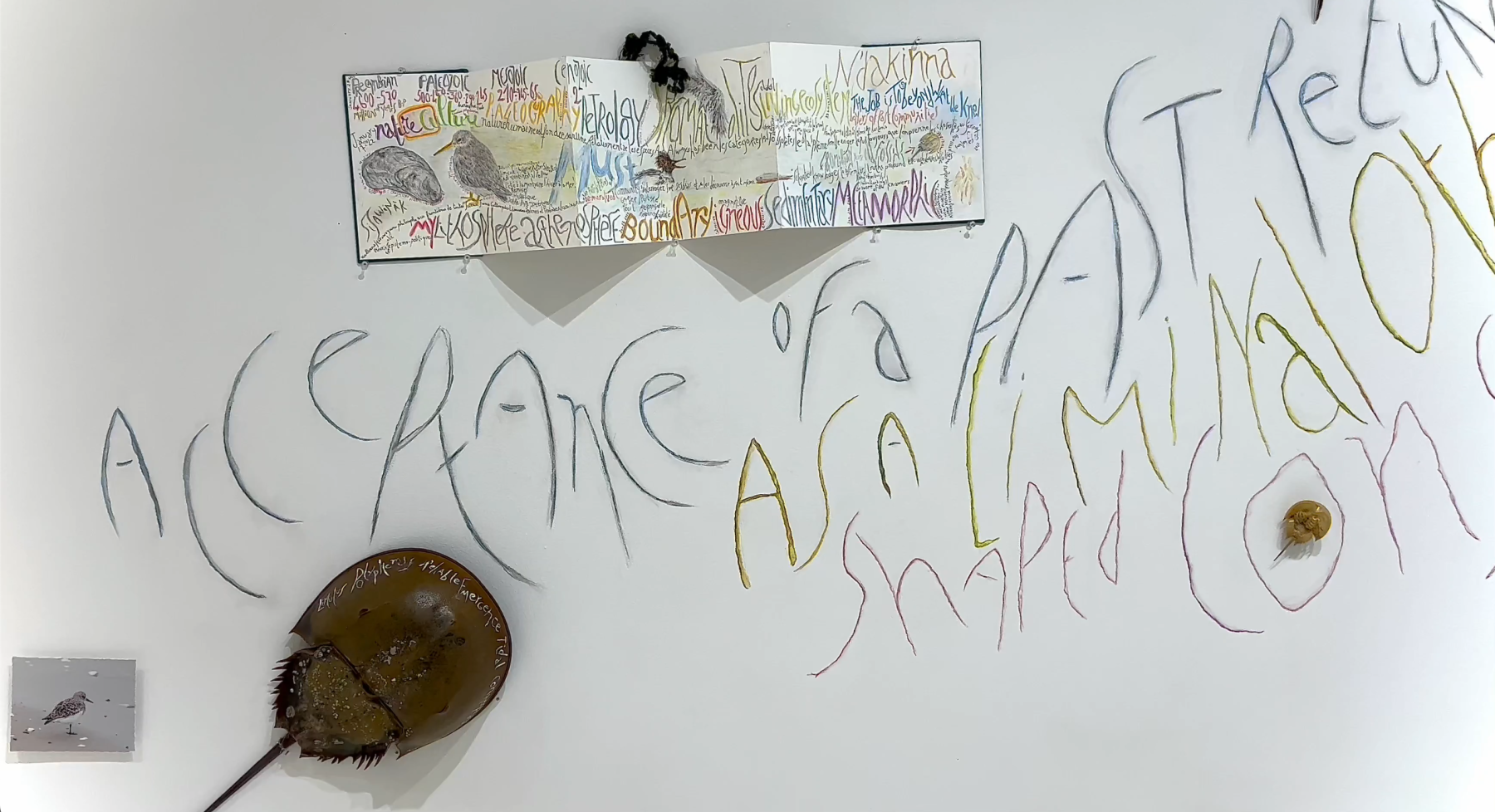 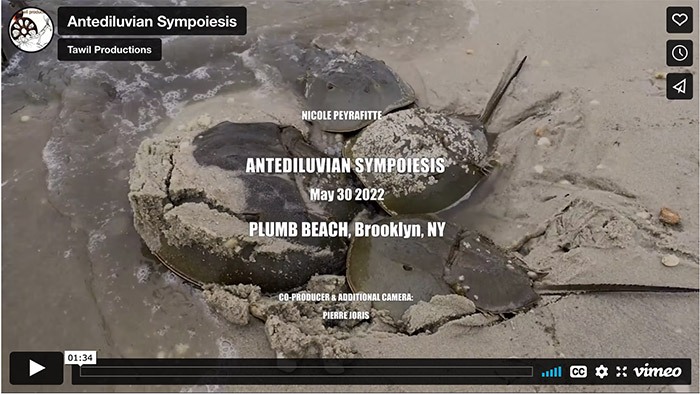 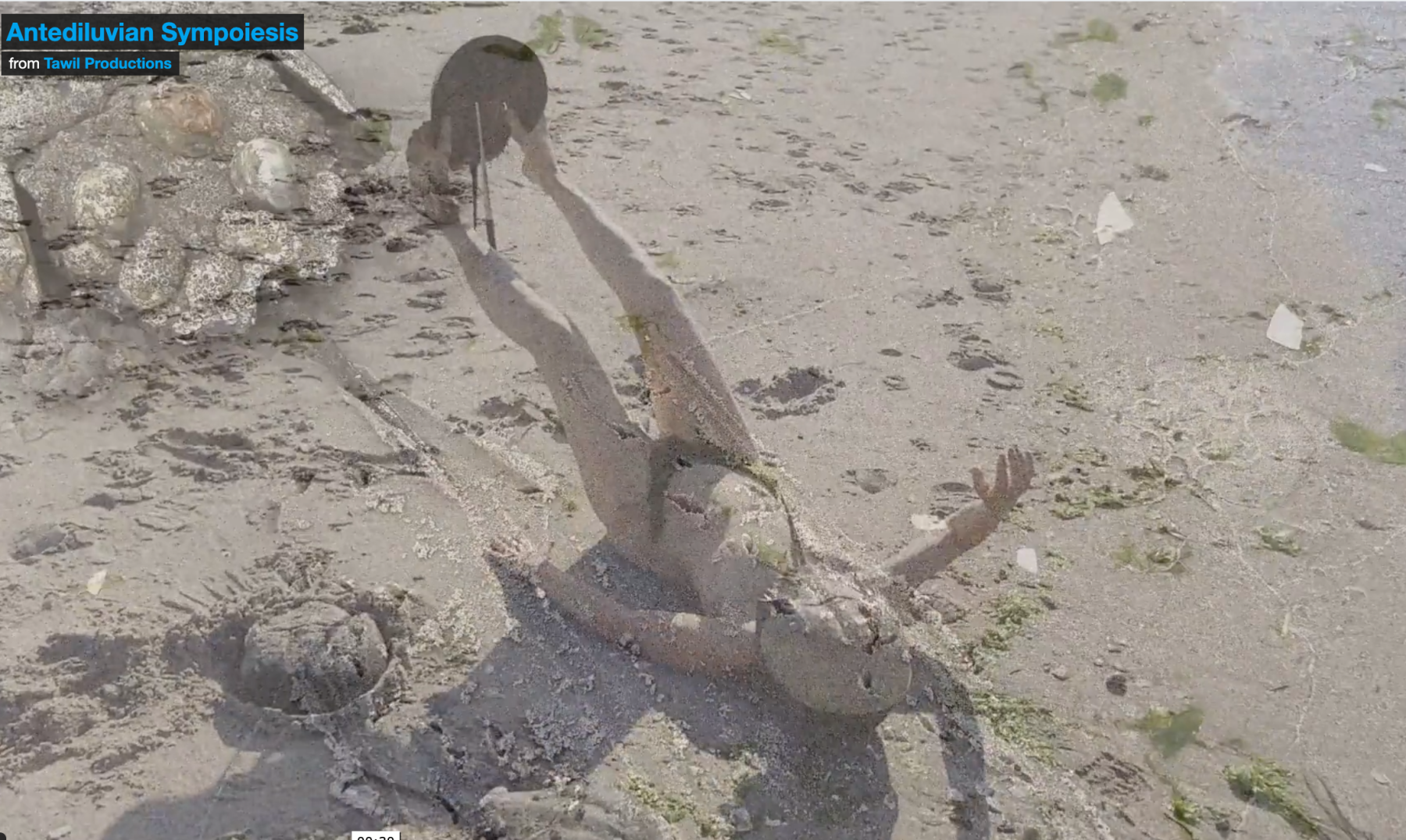 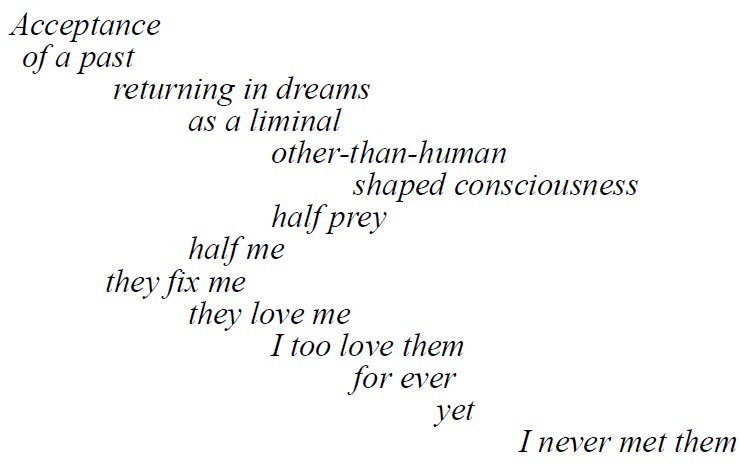 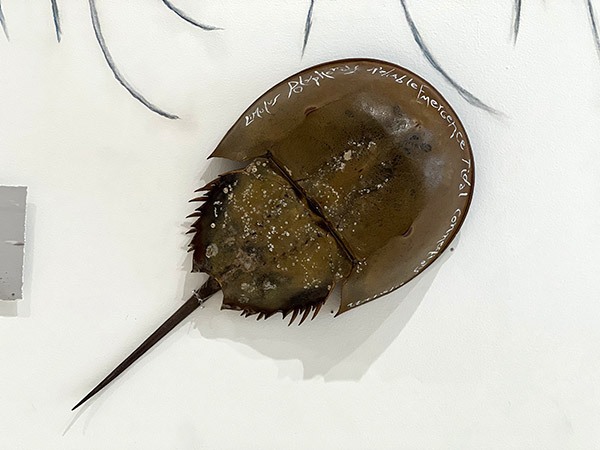 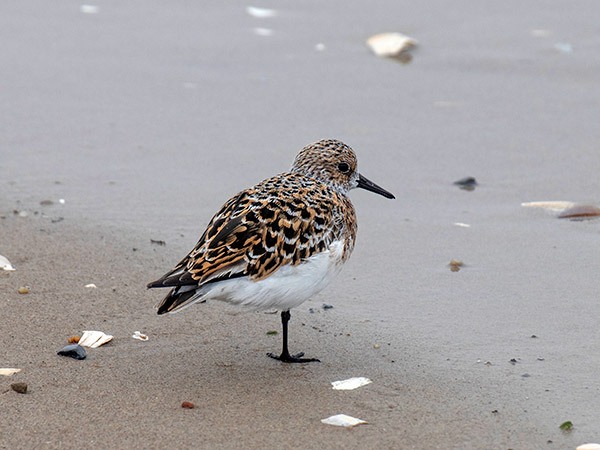 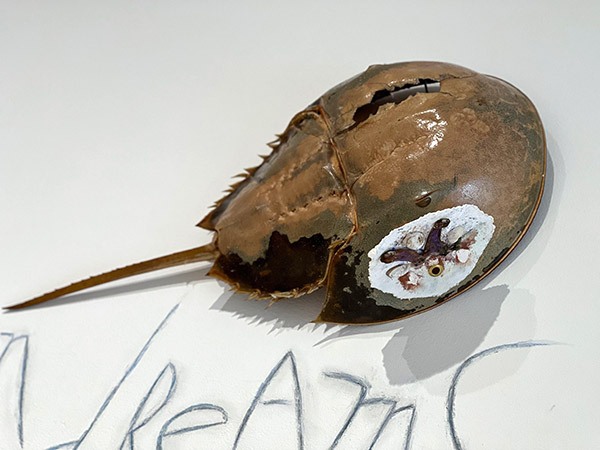 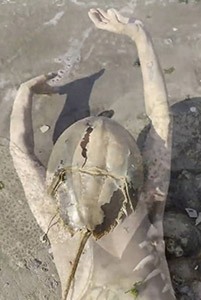 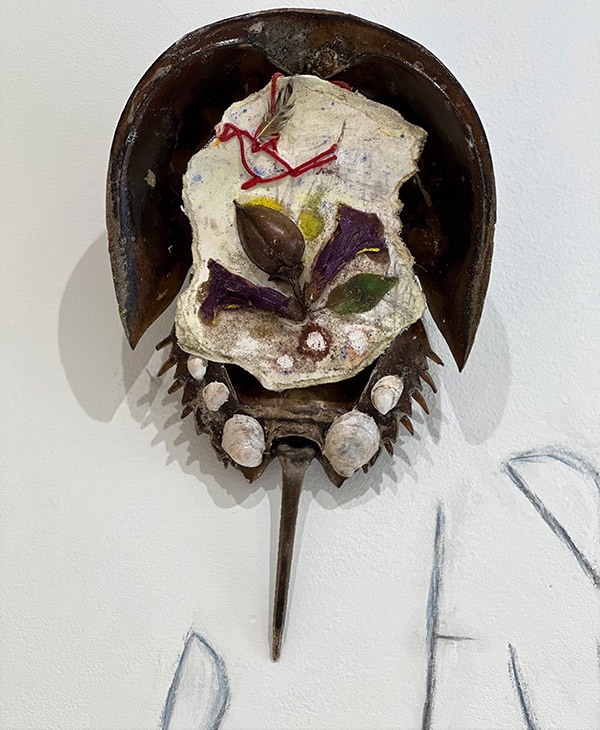 There is more info on my piece “Antediluvian Sympoiesis” here

Many thanks to Bernardine who came to visit the show &  gave me the opportunity to talk about my work on her podcast “Beyond the Paint”. If you listen, please do not hesitate to review & comment!

Meanwhile, may you all be well & have a glorious end of summer, and get the latest on: 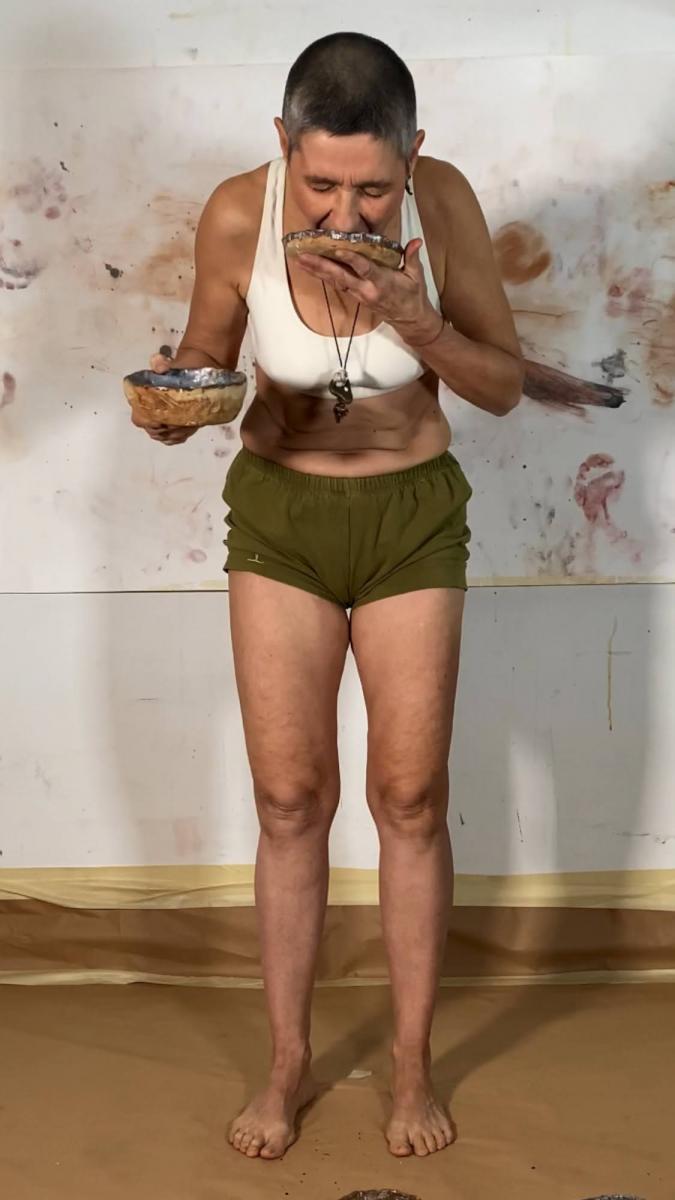 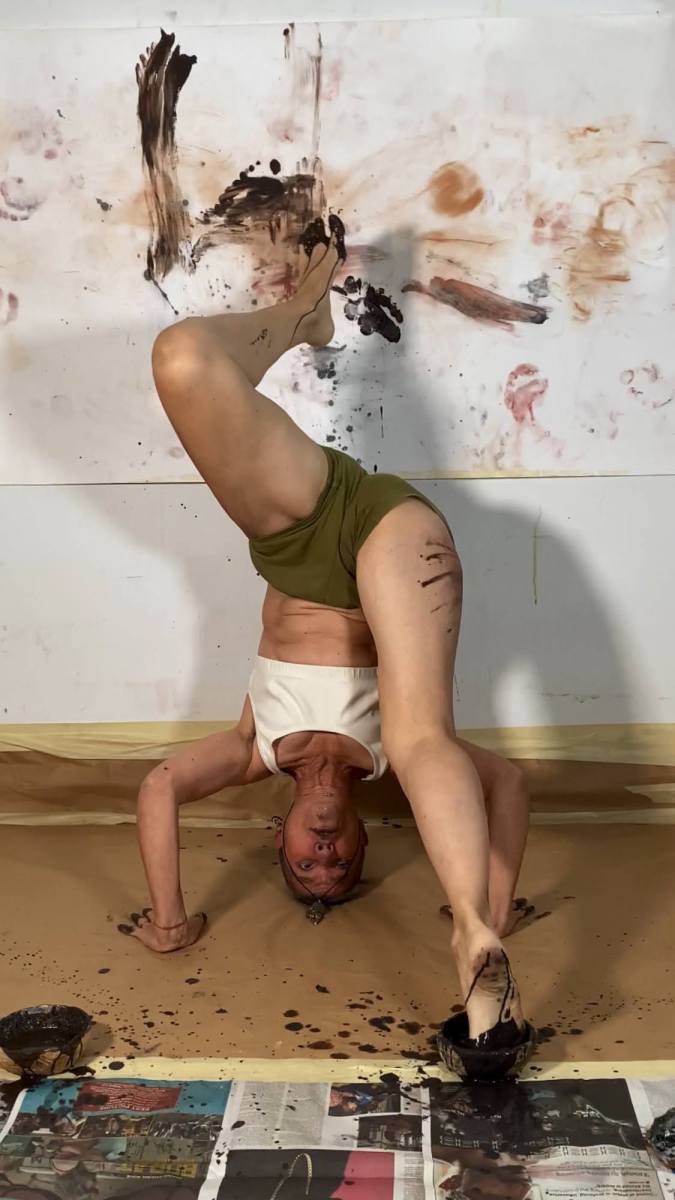 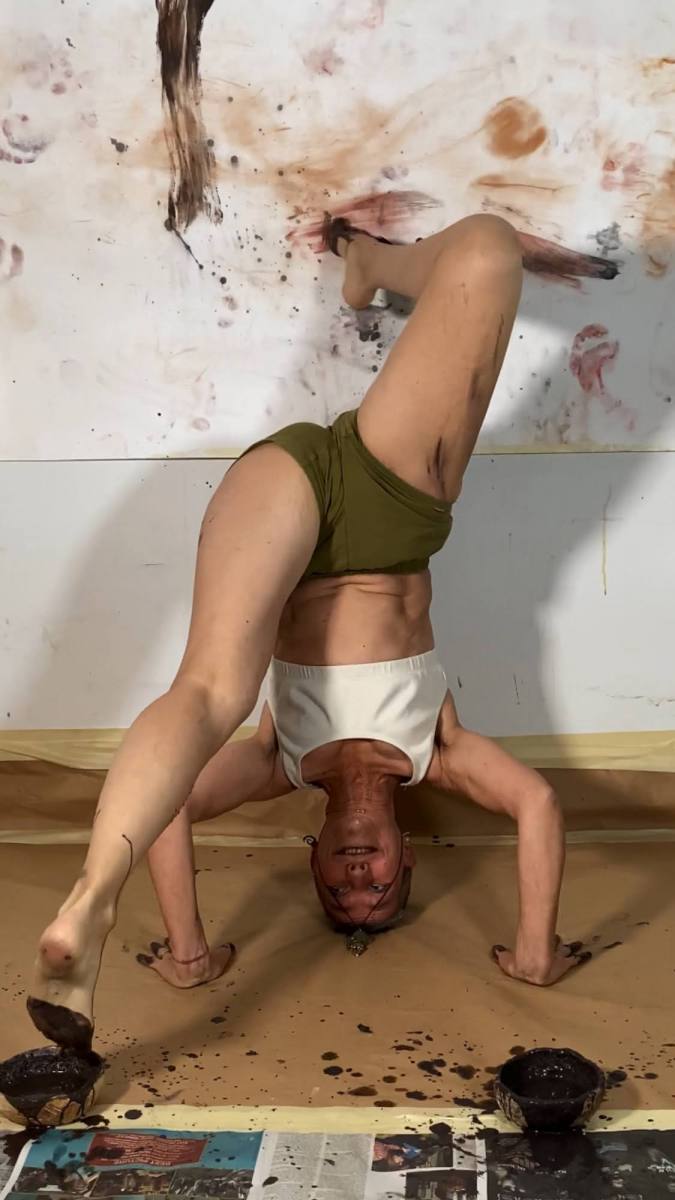 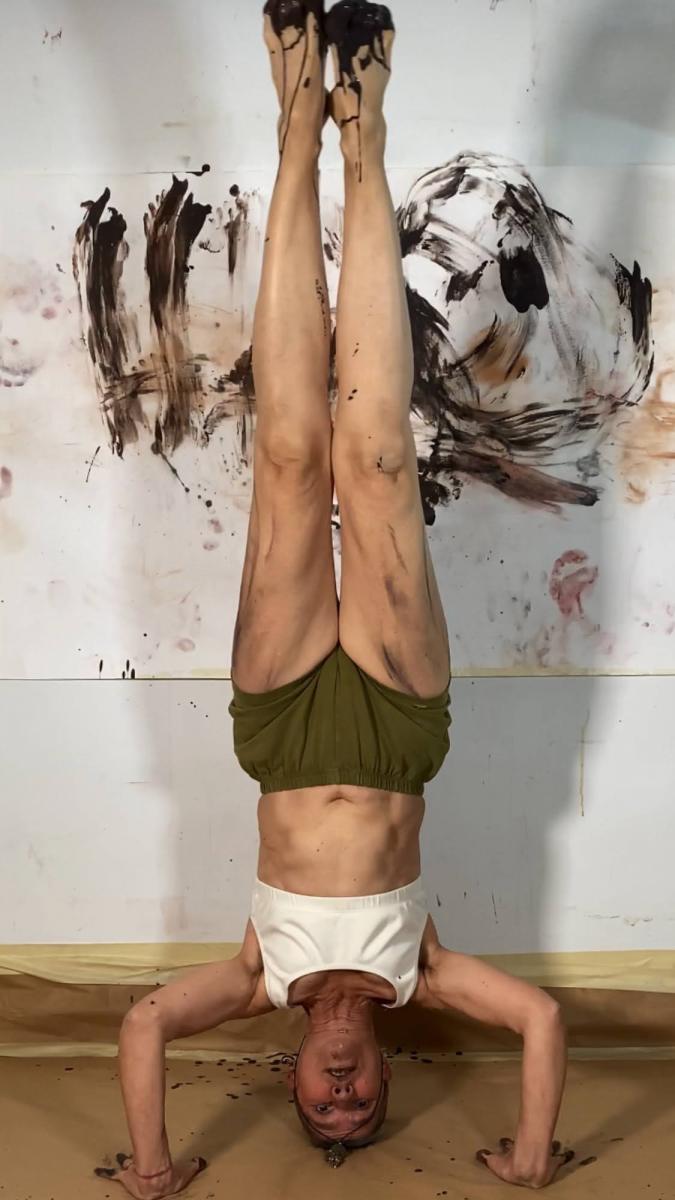 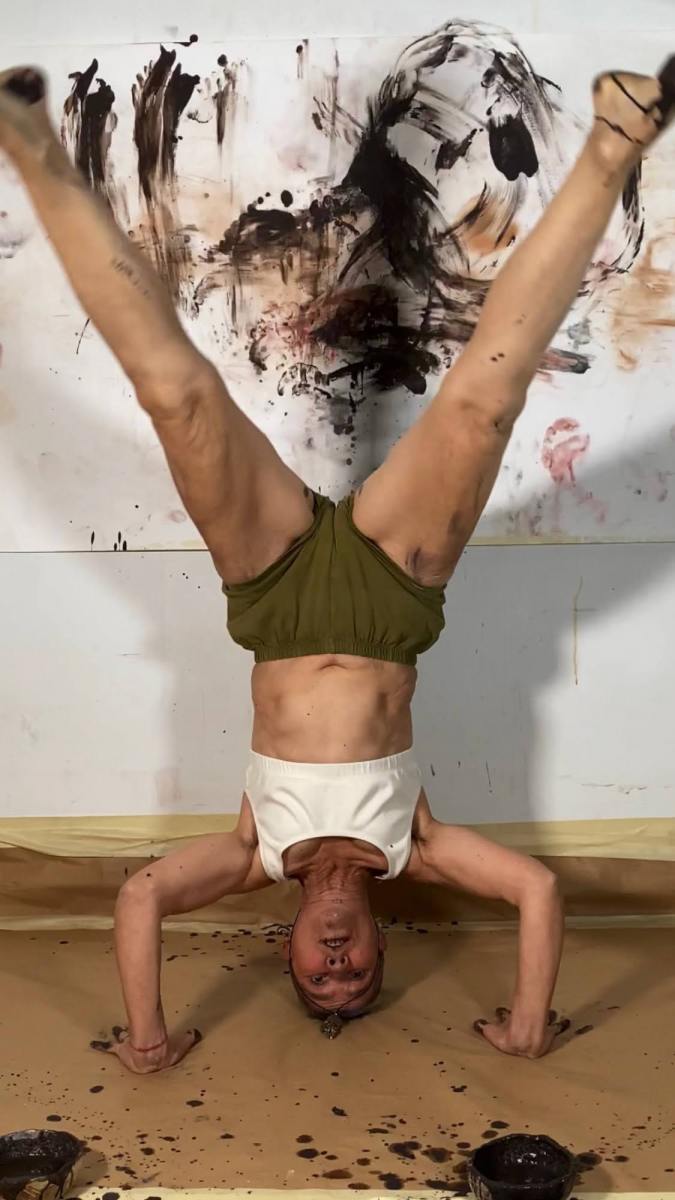 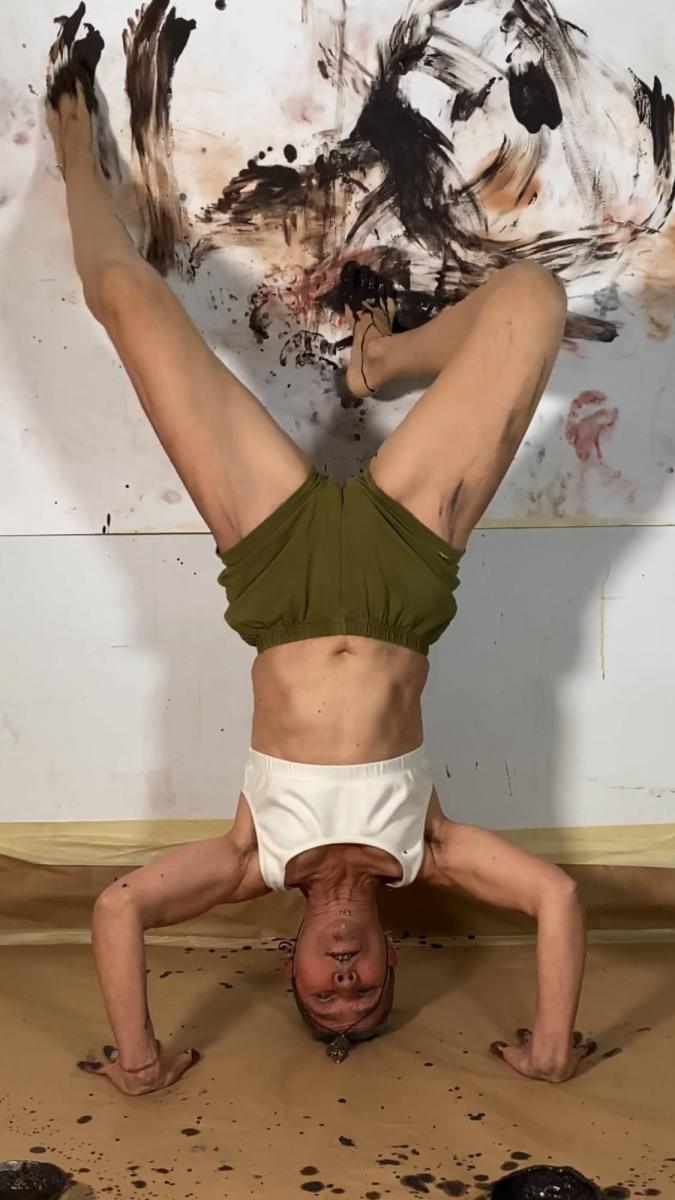 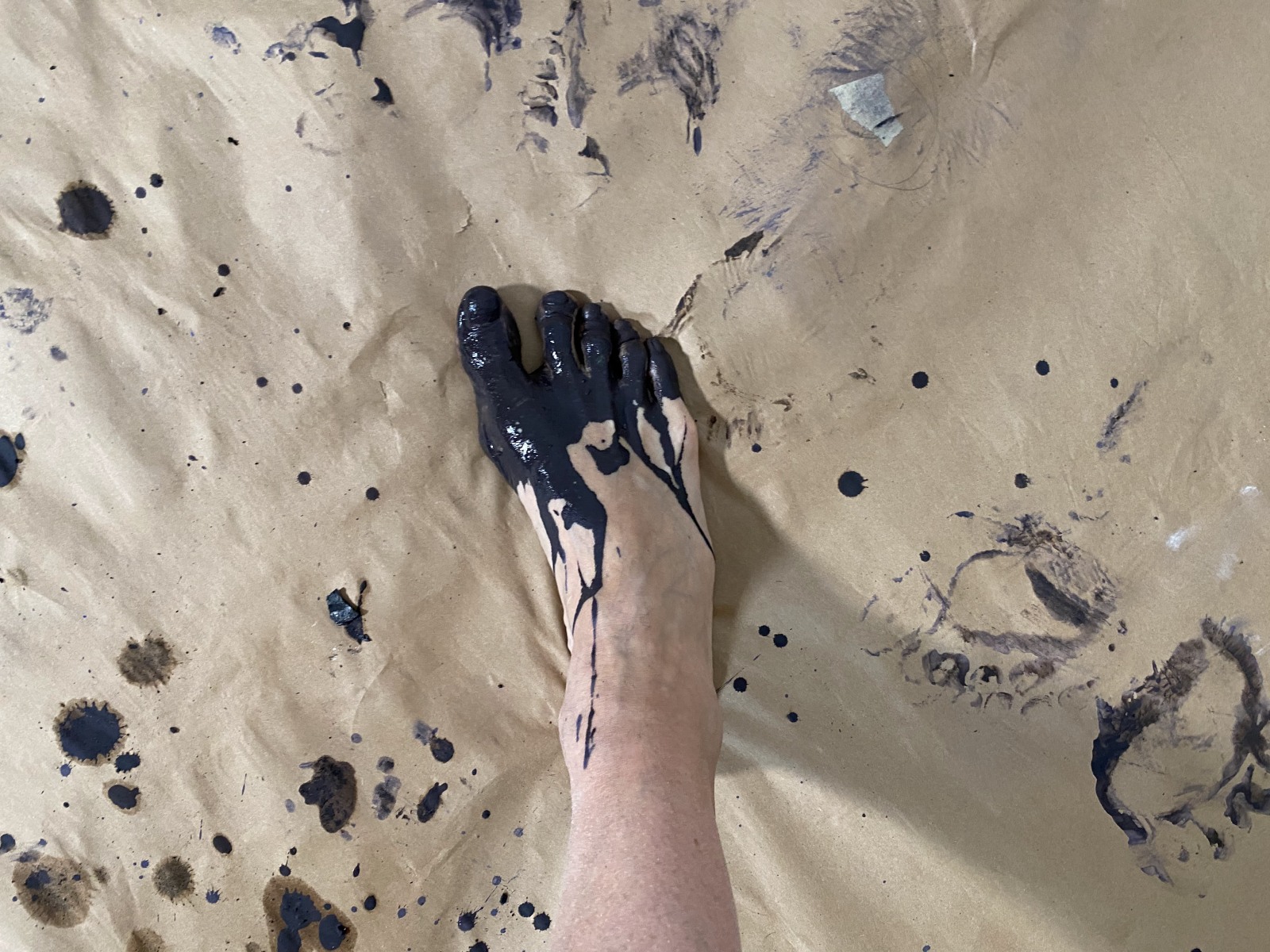 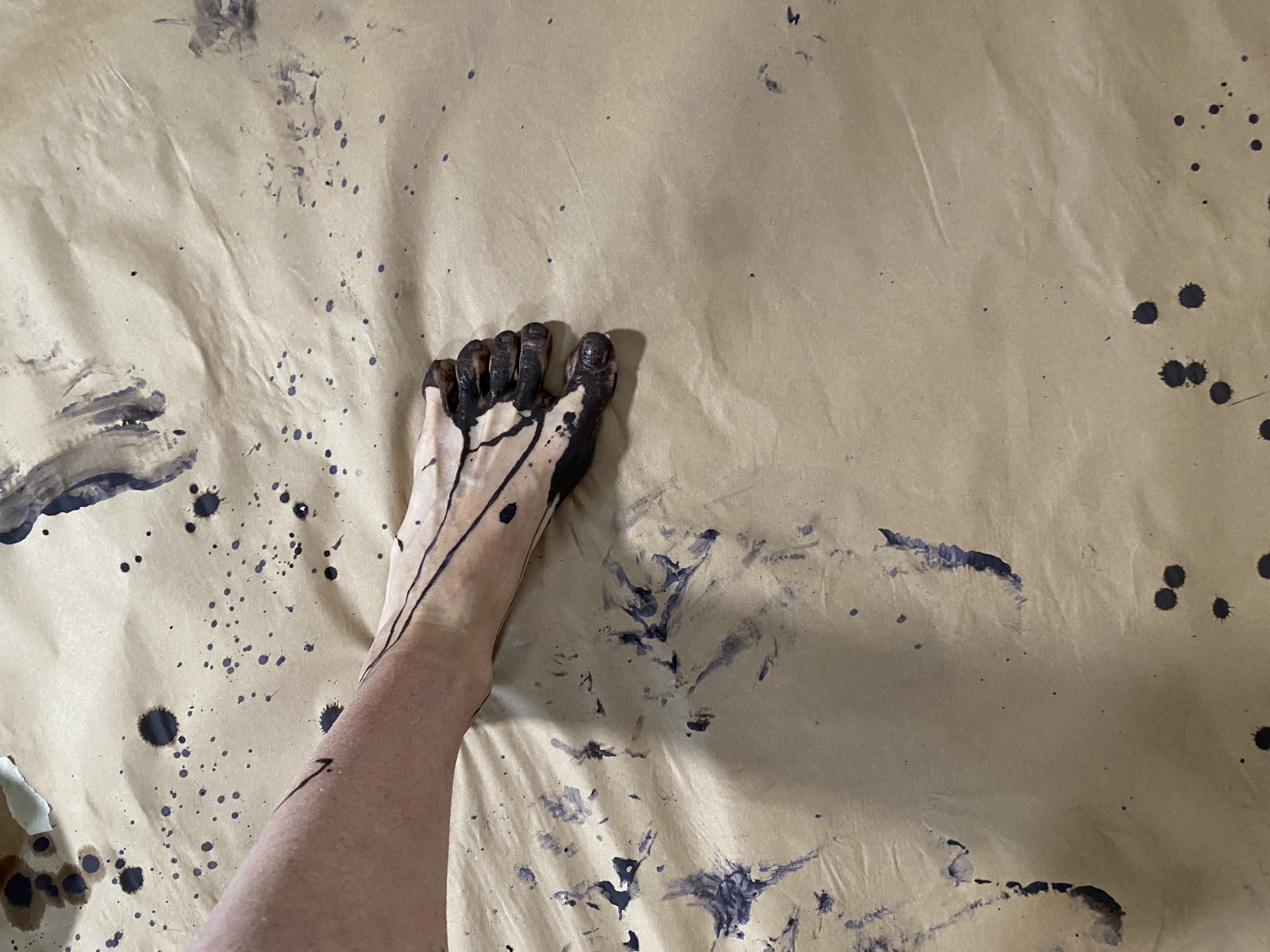 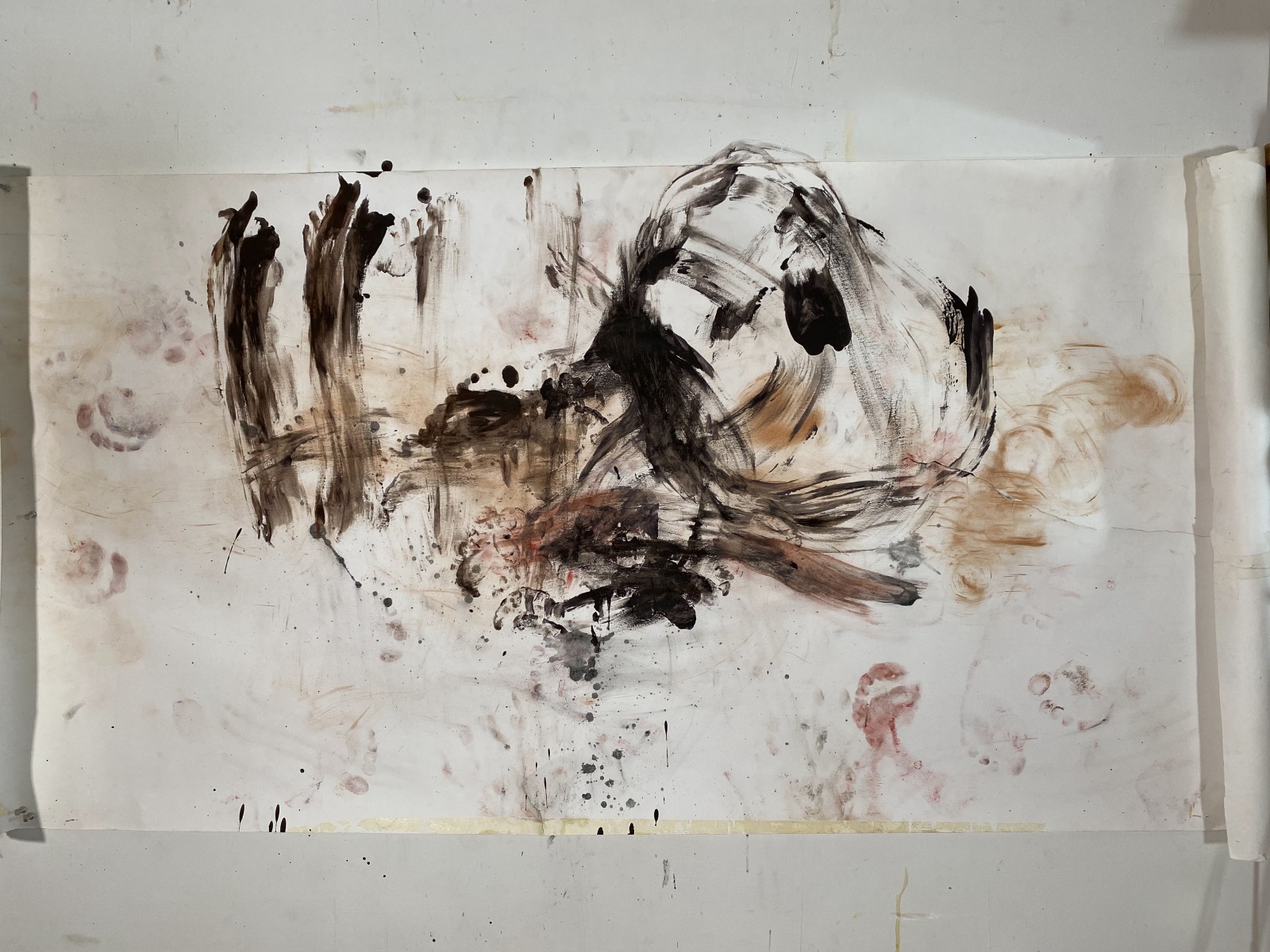 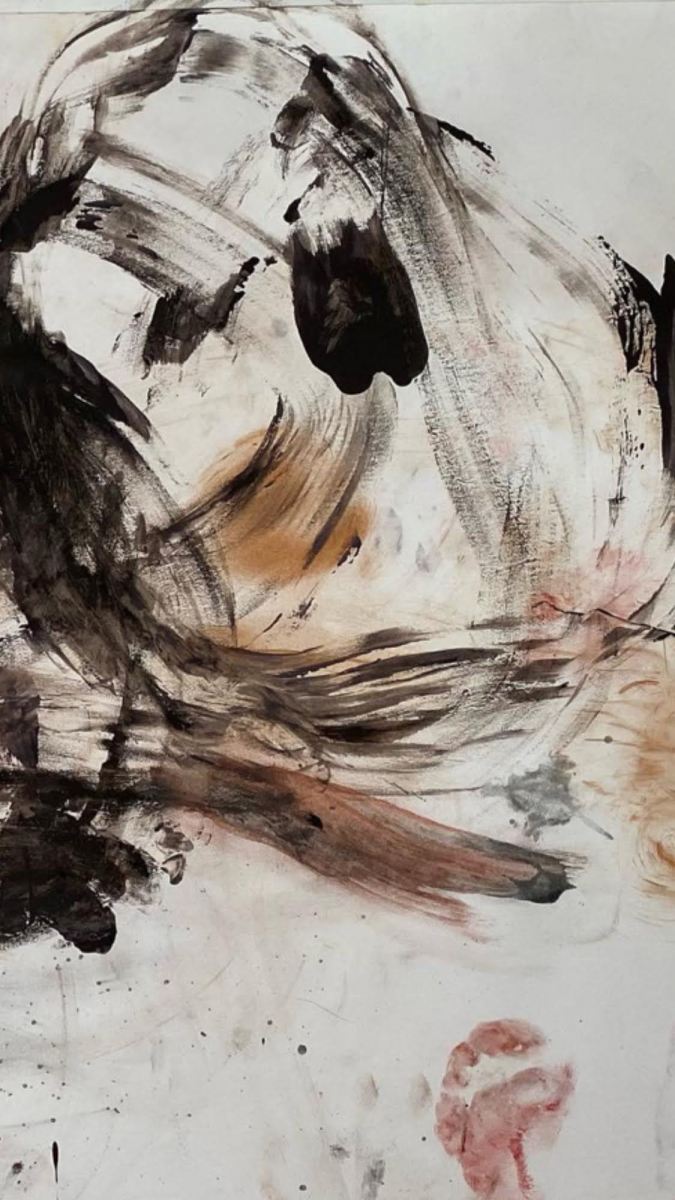 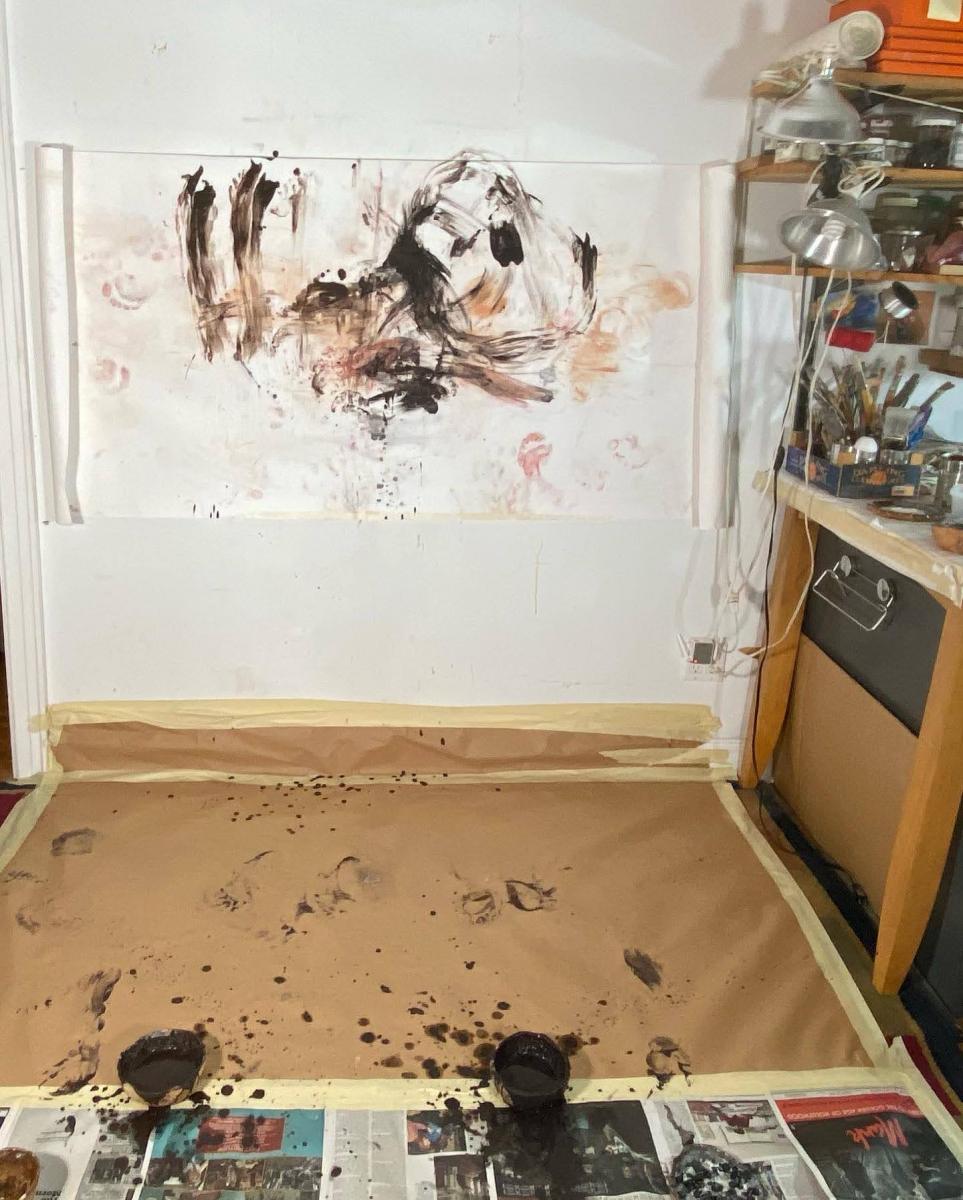 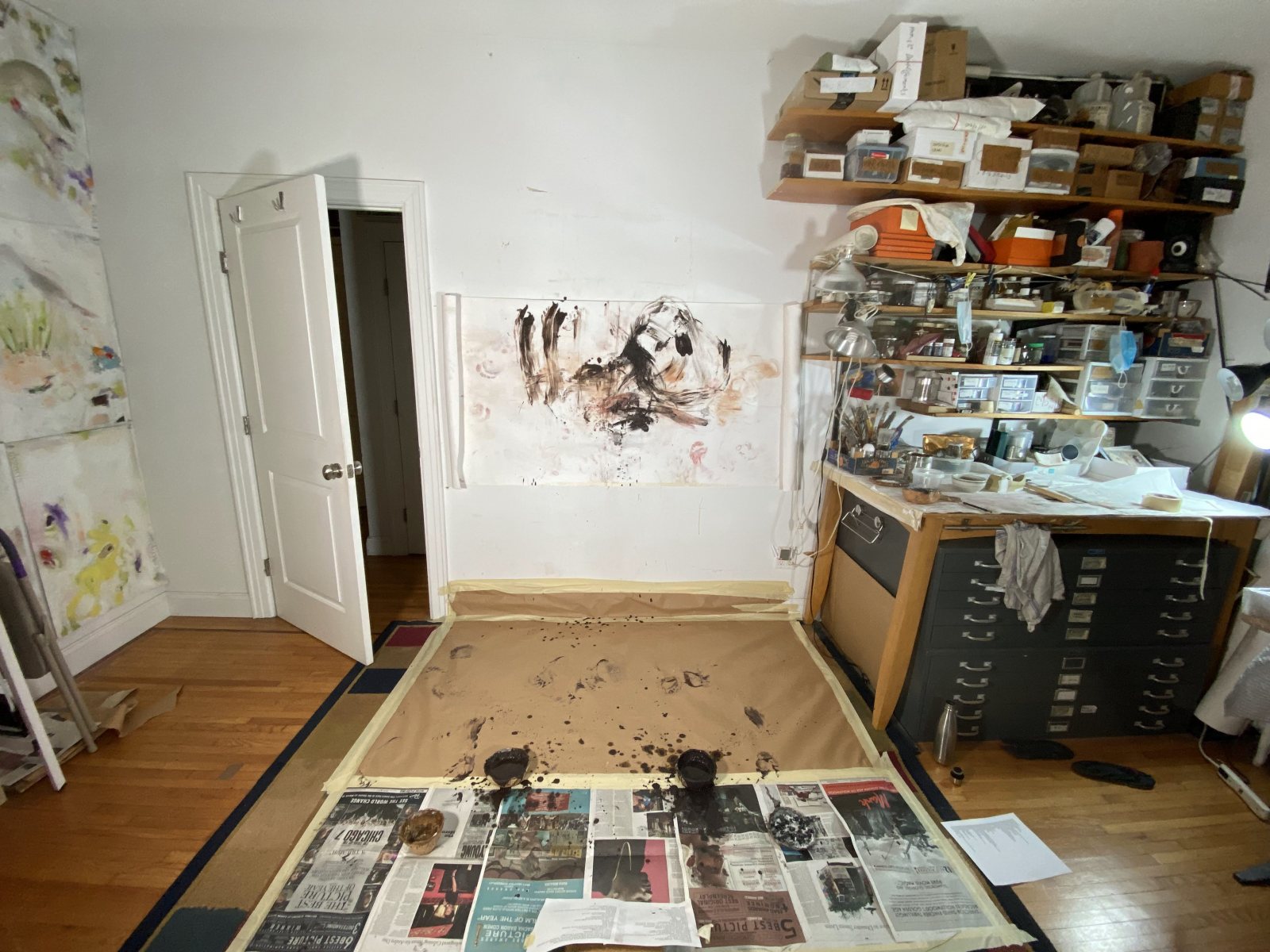 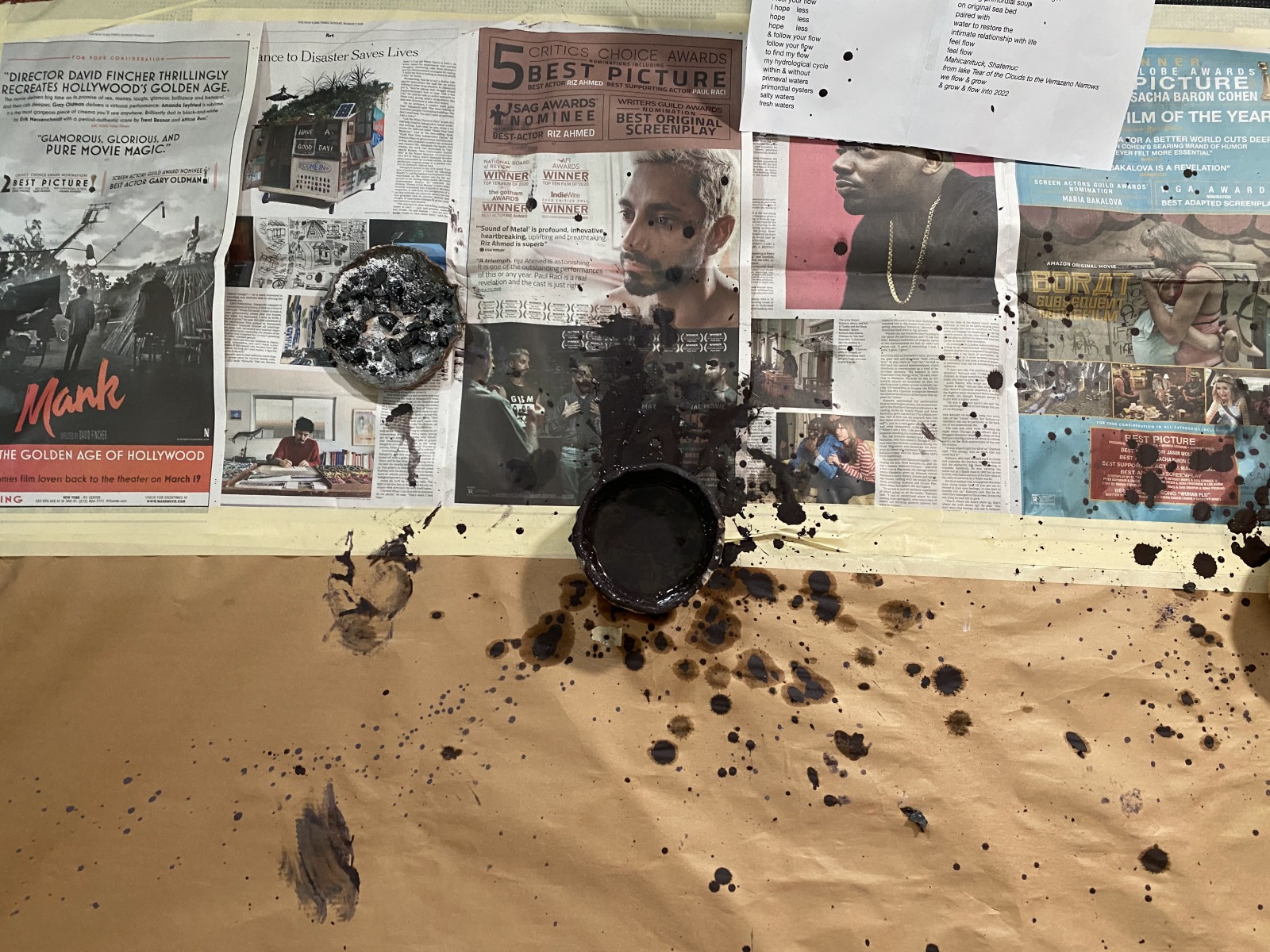 Wishing you a smooth, loving & healthy flow in 2022 despite the complexities we are all going through these days.

So, onward into the new year & on January 1st, I performed a new Karstic Action: Be Like Water (video below) for the Poetry Project’s 48th Annual New Year’s day Marathon. My three minute performance was live streamed at around 7:30PM EST. The piece is dedicated to artist Betsy Damon.  Back in October I was privileged to perform a sound scape I created for her performance Listen, Respect, Revere presented at La Mama Gallery during her solo show PASSAGES: RITES AND RITUALS curated by Monika Fabijanska. Betsy’s radical performance practice from the 70s & her relentless worldwide eco-activism inspires, energizes, & prompts action. Hence the Karstic-Action Be Like Water, a performance precipitated by the proximity of great water in my close environment. I have lived on the shore of Shatemuc since 2007 (in Bayridge, Brooklyn) & before that on the shores of Mahicanituck (Albany, NY 1992-2007). Different names for the same river, whether it is the Mohican’s name upstream or the Lenape’s name downstream, the meaning remains the same: “the river that flows two ways,” — thus not just a river, but a tidal estuary, an arm of the sea where salty seawater meets fresh water running off the land. Today we call her Hudson River, after the English navigator Henry Hudson who in 1609 sailed the “Halve Maen (Half Moon),” a Dutch East India Company three-masted flyboat, upstream to Pem-po-tu-wuth-ut or Sche-negh-ta-da, today Albany, NY

These waters, these lands had long been navigated & populated by native peoples— for at least 10 000 years. But what is left of the 9500 years of these rich & complex layers of life, history, culture? Karstic-Action Be Like Water was broadcast from my studio in Bay Ridge — in the southwest of Brooklyn, located on a terminal moraine created by receding glaciers around 13,000 years ago along the Verrazano Narrows. This land belonged to the Lenape people & there is local evidence of their dwelling here since 4500 BC. The Lenape belong to the Algonquin civilization & spoke Munsee. Given their predominantly oral culture, early written documents are rarely accurate as they come to us from the first colonizers who knew neither their culture nor their language. Like the other Natives, the Lenape have been dispossessed, displaced, practically exterminated. The colonizers also usurped & changed the names of rivers, valleys & mountains which in their languages had held important geographical & linguistic information. From the beginning on the European infiltration started to obliterate the ecological equilibrium of their sustainable land- & water-based environment. Before Henry Hudson, the Florentine Giovanni de Verrazano visited the narrows in 1524, sent by the French king, François 1er. A Brooklyn Eagle article from 1911 reports that graves have been found on the Bliss Estate, or what’s now called Owl’s Head Park. “This is known as Indian Mound, for here Indian relics and bones have been found.” This mound —part of the moraine mentioned above, is my neighborhood park & I visit it almost everyday when I am in Bay Ridge.

Karstic Action: Be Like Water is the distillate of the geological, historical, environmental information I acquired over the years, succussed into a 3-minute performance. This work is in the lineage of the KARSTIC-Actions Paintings open-ended series of live performances I started in 2011. They explore proprioception (sense of body position) & kinesthesia (sense of body movement), as meeting points between painting, poetry, voice, music, ecology, geology, history. “Karstic” refers to the geological phenomena of dissolution & transformation at work in the formation of superficial or underground limestone topographies. By a similar principle of infiltration, language transforms into poem, breath into song and colored chalk become pastel into marks on paper or canvas. Always “in/quest of” equilibrium through an ecological consciousness in the literal meaning of that term: greek οἶκος / oîkos/ house, household, dwelling & λόγος / lógos/ discourse, thus science of dwelling.

The sound track was pre-recorded (recording & mixing courtesy of Miles Joris-Peyrafitte) to allow me to focus on the physical performance aspect. The text is an assemblage of the “Mahicanituck” song written for the performance “The Bi-Continental Chowder” in the early 2000s & of a second part written over the past week. The background of the live painting is a sheet of paper used as a floor covering & saved from a 2015 action painting. The pigments were a mixture of chewed charcoals burned in the fireplace of our house in my native Pyrenees, pure calcium carbonate (calcite), Ercolano red,  terre verte Brentonico, Chefchaouen blue, French clay,   bauxite de Tourves, sand from the Narrows; all mixed with water & applied with the feet while in headstand (Salamba Sirsasana II). 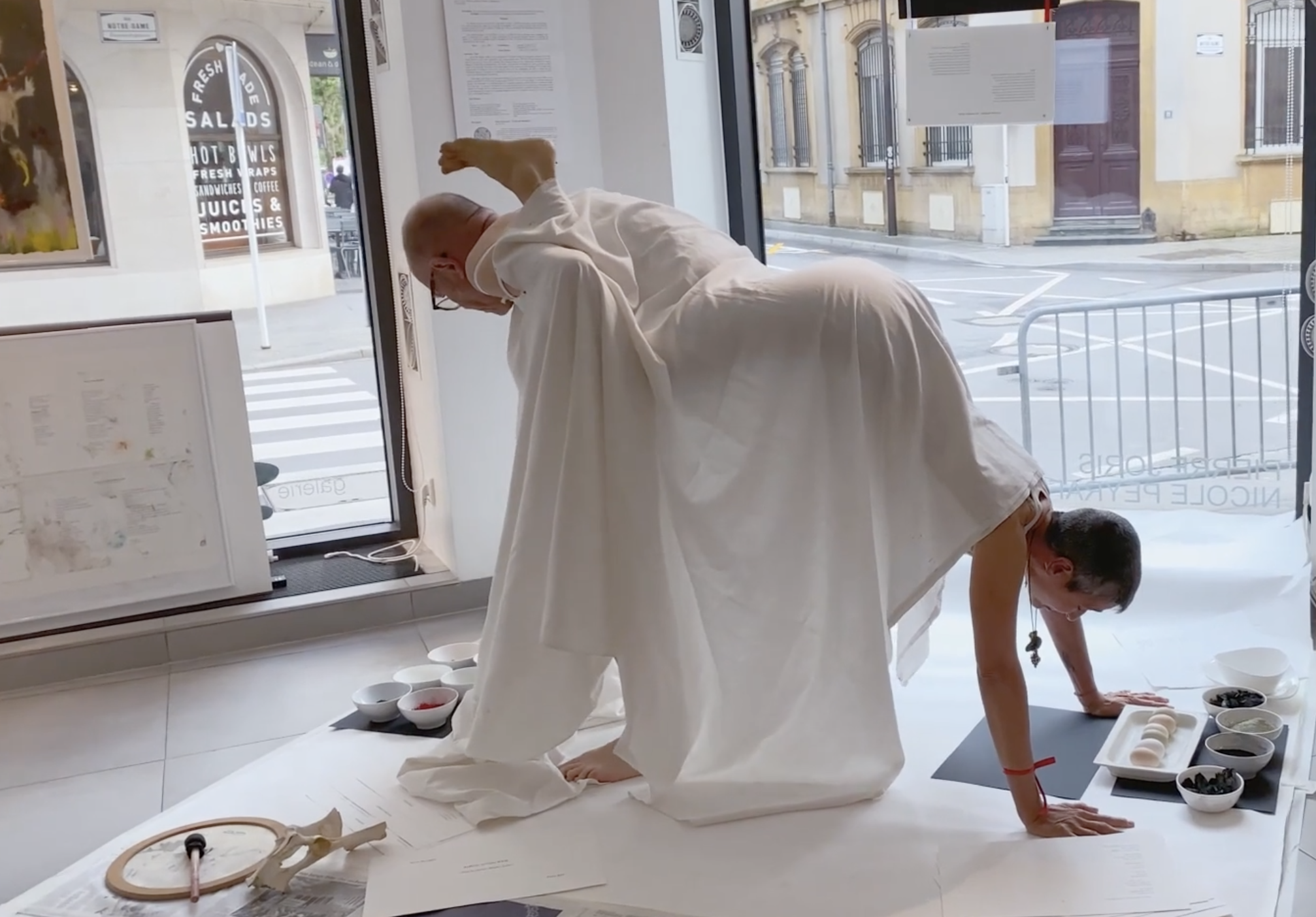 From June 4th — July 15, 2021 Galerie Simoncini —Luxembourg, presented the second extensive installment of Nicole Peyrafitte & Pierre Joris’ Domopoetics creations. The couple, who has shared life for three decades, moved in with their most recent KARSTIC ACTIONS/WORKS —paintings, texts, videos — & occupied the three levels of the gallery.
— On the ground floor, the Karstic Refuge where their domestic & political processes interconnect & transform.
— In the basement, the Sanctuary, neither holy nor secret, but table/altar for their intimate domopoetic works.
— On the second floor, the Canopy, where the diversity & resilience of multi-species relations can be experienced.
For the opening & the finissage live Karstic-Action performances were presented. Below are the two videos:

OPENING:  Friday, June 4th at 6:00PM with an improvisation of Pascal Delalée on violin 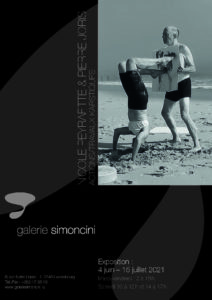 Hello everyone!
After a year & more sheltering at home in Brooklyn we are happy to head out to Europe, fully vaxxed, to pick up on gigs delayed by the pandemic. Four events are central, all taking place in Luxembourg:
1) our most recent KARSTIC ACTIONS/WORKS at Galerie Simoncini;
2) Pierre Receiving the Batty Weber Award;
3) the CNL celebrating his 75th birthday on 14 July (details to be announced)
4) the “finissage” of the KARSTIC ACTIONS/WORKS show on 15 July.
Voilà! Details below & looking forward to reconnect other that virtually.

2) Just before the KARSTIC ACTIONS/WORKS, exhibition/performance, a long-delayed (because of covid) event will take place on 1 June: Pierre will receive the Batty Weber Prize  (Luxembourg’s life-time achievement award in literature). The ceremony will take place at 7 p.m. at the CNL (Centre National de Littérature) in Mersch in the presence of Minister of Culture, Sam Tanson & the director of the CNL, Nathalie Jacoby. A laudatio will be read by Jean Portante, celebratory poems sung by Nicole Peyrafitte accompanied by Pascal Delalée on violin, & Pierre will read the essay he wrote for the occasion & which will be available as a pamphlet from the CNL (Various Variable Words Variably Arranged in the Form of a Celebratory Talk-Essay on Language & Luxembourg).

3) We’ll be back in Mersch on July 14 as the CNL has proposed to celebrate Pierre’s 75th birthday by creating an event that will include poetry readings & performances by Nicole & some others of our friends, a public interview of PJ by Florent Toniello for a future book, and more. Details to be announced.

4) Finally on 15 July, the finissage will happen at the galerie Simoncini, possibly with a final performance as we take down the paintings, pack the videos & get ready to return to Brooklyn.

—“Karstic-Action Je me dé-suffit/ Dé-suffice“: Official Selection of the 9th International Video Poetry Festival. The premiere of the festival will be on Sunday June 6th & will accessible to everyone in the entire world in the Video Art Zone 2021 section.
—Things Fall Where They Lie /Les Choses Tombent où Elles Reposent:
is now available on VOD to rent/buy
English subtitles  /  Sous-titres Français
—The Museum of the Women Library in Glasgow acquired the painting Nicole made during our performance at the CCA on 5th October 2016 as part of the Outside-In / Inside-Out poetry festival and symposium held in Glasgow and  here it is
—Karstic Actions featured  in Periodico de Poesia UNAM (Universidad Nacional Autónoma de México)

Pierre’s
upcoming online events include:
— Workshop “Celan übersetzen” (FU Berlin, Literarisches Kolloquium Berlin), 14.-15. Juni 2021. This will be a zoom occasion. DTBA
— A Claude Pélieu Symposium in Paris to be held at the University of Chicago Center Paris, On 8/9 July. Still uncertain if this will be live or zoom. DTBA.
— Pierre’s two 2020 Celan books, Paul Celan: Microliths (Posthumous prose) (CMP) & Paul Celan: Memory Rose into Threshold Speech —  Collected Earlier Poetry (FSG) have garnered quite some reviews. Here are links to some of these:

Have a wonderful summer everyone stay strong & healthy! 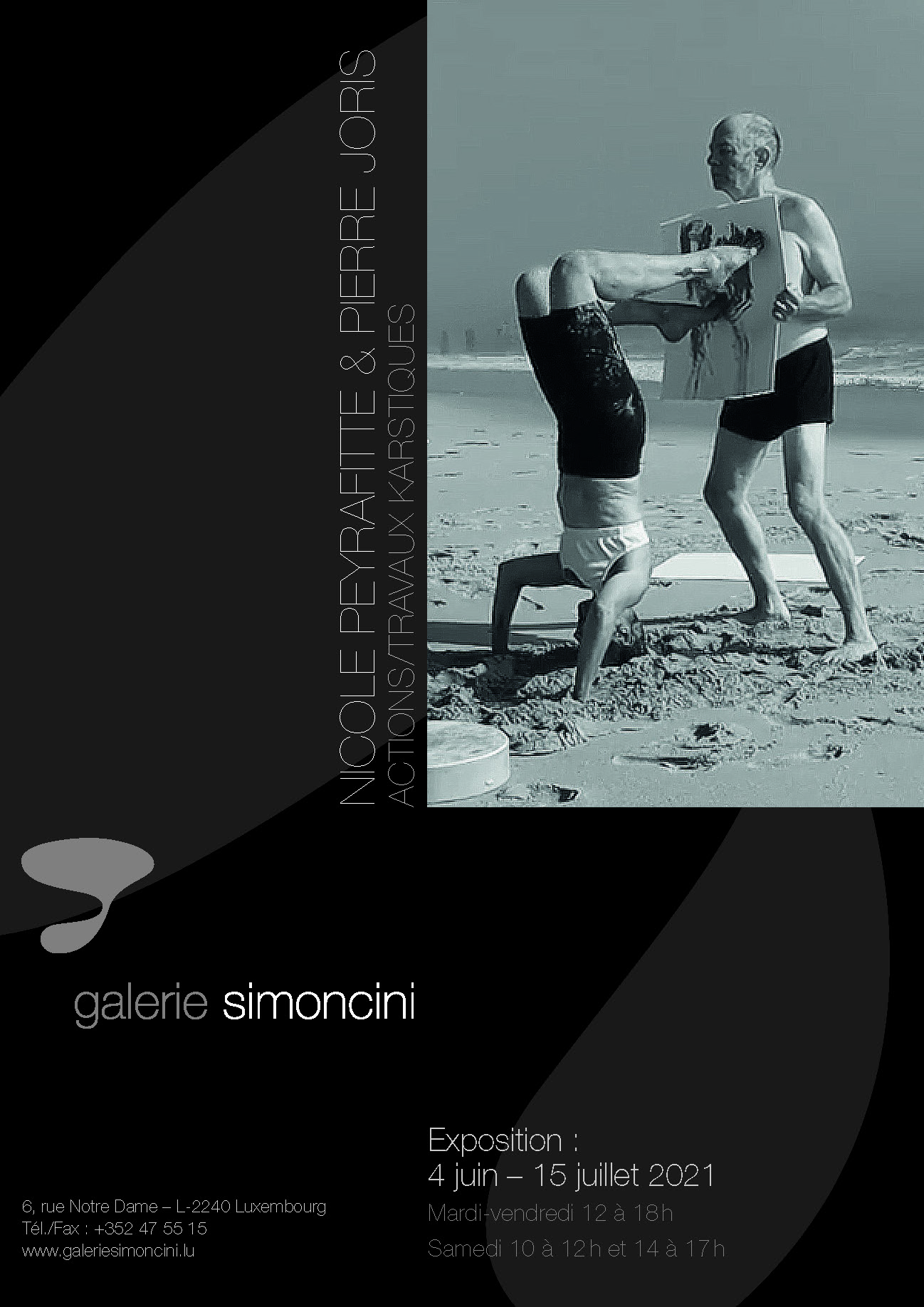