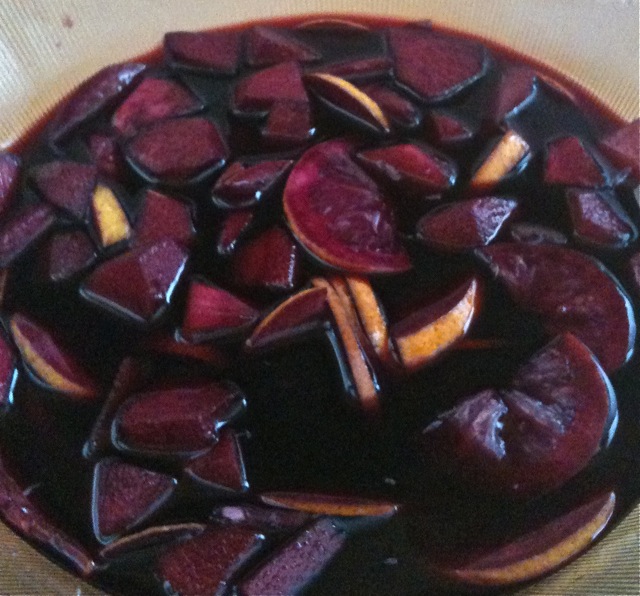 In order to fully support Spain during the The World Cup Final I decided to make sangría. It was very  à propos as we were invited to the home of Spanish friends and neighbors. They had made a delicious buffet of empanadas, calamari, arroz negro (black rice, made with sepia ink), chorizo, queso manchego. They had decorated their entire living room red & gold & I think my sangría matched the intensity of the event!

Most sangría recipes call for sweetening ingredients—sugar, honey, ginger ale, seven up…etc. These ingredients are the main reason why sangría hang-overs are dreadful. I worked out a recipe that requires none of the above and and will save you from a terrible headache. I usually drink the first round straight, then I add a few ice cubes and if I sense it is going to be a long drinking stretch I cut it with  seltzer  — always in my glass never in the main container. Needless to say,  this is a sangría con conjones! —meaning strong— so use in moderation, not like I did, though no headache this morning!

I marinate the fruits overnight which means that they will loose they original color but will have flavored the wine that much more! Salud! 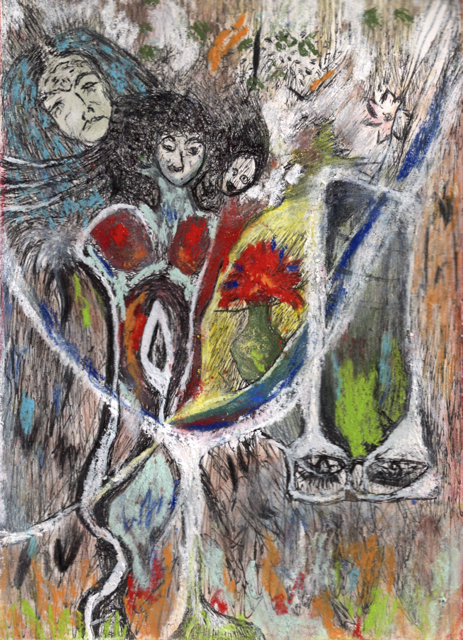 Graduation, birthdays, family visits, drawings, preparation for up-coming shows kept me away from the computer, but here is the schedule for the next few weeks. We hope to see you at these very exiting shows:

A conference by Pierre Joris, co-editor and translator of Pablo Picasso’s poetry: Burial Of The Count Of Orgaz & Other Poems
I will be the reader for  the French & Spanish versions of Picasso’s texts.

Thursday July 1st
5:00pm -midnight (our time TBA)
at the Brooklyn Bridge Park
Pierre Joris & I will be among the many poets & performers of:
I Do Not Doubt I Am Limitless: Walt Whitman’s Brooklyn 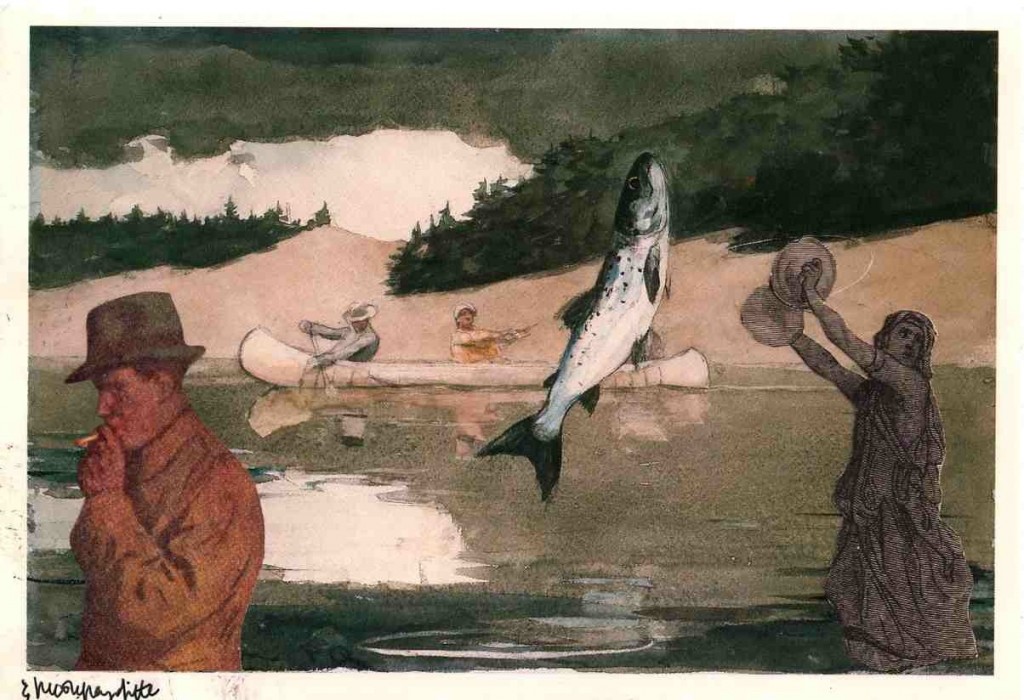 I am looking forward to a variety of exciting events this spring/early summer. All the details are listed below & do not miss “Trialogues” —Joris/Peyrafitte/Bisio— at the Vision Festival June29th! 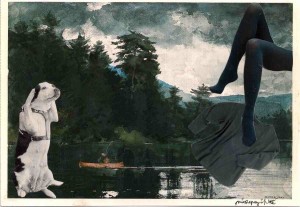 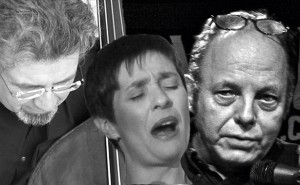 And still on view: 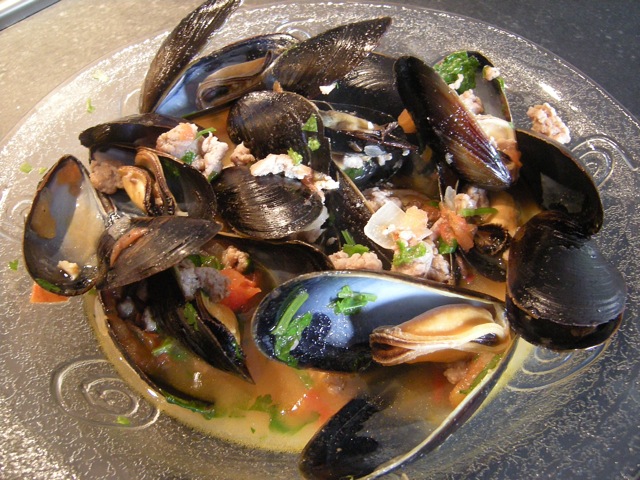 Mussels contain high doses of Omega-3, a fish oil compound that nutritionist say is helpful in reducing cholesterol. Farming mussels is believed to have been invented in France in 1235 by an Irishman named Patrick Walton. The story goes that Patrick Walton left Ireland to escape the police. His boat wrecked on the coast of France. He tried to feed himself by trapping sea birds. To this purpose he planted stakes into the water at the edge of the beach and stretched nets over them. The sea birds ignored the contraption, but after a time he noticed that mussels had attached themselves to the stakes and were growing rapidly.  Cute story! But there are some indications that the Gauls had cultivated mussels even before the roman invasion.

The most common way of preparing mussel is as Moules Marinière; our version today is an extension of this traditional preparation. It is my original version based on several French Southwestern recipes and inspired by what I found at the Bay Ridge Greenmarket this morning and I call it Country Mussel or Moules Paysanne.

First a few tips about mussels:
How much mussels to buy per person?
To serve them as a main dish, get as much as one pound per person. As an appetizer half a pound should do it.

-Discard dead mussels: that is if one is wide open, it’s probably dead. If they are open only slightly, a quarter of an inch or so it should be fine. How do you tell if a mussel is merely gaping to breathe or if it is dead? Simply put ice on the mussels for 15 minutes then tap them gently. They should begin to close. If they move, they are alive therefore  can be eaten – even if they don’t close all the way. If a mussel won’t move, and is gaping widely, it is probably dead, past it’s shelf life and should be discarded.
-Throw out broken-shelled mussels. 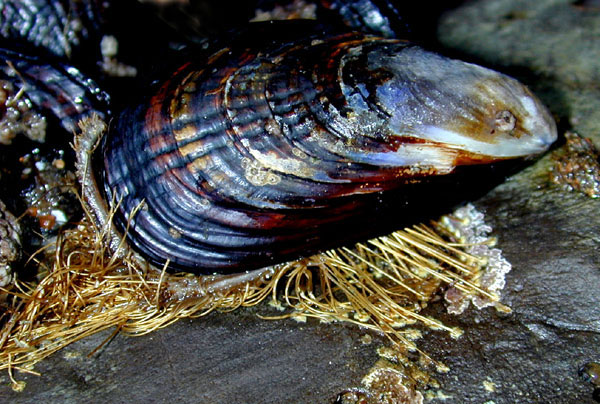 -De-beard mussels.  Most likely you will not have to do that, and good for you. I remember cleaning kilos of them in my early restaurant time and that’s ain’t fun. Today they are de-bearded before you buy them, but once a while one is missed and you get to see what the beard looks like. The “beard” also known as Byssal, or byssus threads they are the strong, silky fibers made from proteins that are used by mussels to attach to rocks, pilings, or other substrates.-Discard heavy mud filled mussels. Some extra-heavy mussels that are closed may be full of mud. Doesn’t happened very often but worth checking because only one of these unloading its cargo in your kettle of broth will spoil the entire dish. Usually a “mudder” can be discovered by simply squeezing the shells and sliding them apart from each other.
-Rinse them just before using them

-Do not soak them
-Do not over wrap or purchase over-wrapped mussels. Remember they are alive, do not suffocate them in the fridge or do not store mussels in airtight containers.-Do Not overcook your mussels-Do Not buy mussels that are displayed in live lobster tanks or in shellfish display tanks.
-Do Not eat mussels if you believe you are allergic to shellfish.

Recipe
for 2lbs of Mussels

Sauté 4 shallots and 1/2 lb of Italian turkey sausage (or sausage, or Italian sausage or pancetta, or ham) in a tablespoon of butter and oil (addition of oil will keep the butter from browning); when meat has rendered and the shallots are transparent, add 1 or 2 (depending on how you like it) skinned, seeded and diced fresh tomatoes (canned if not in season). Mix it all well, add a generous amount of fresh ground black pepper and salt to taste.

Add all the mussels (that have just been rinsed), mix well. Add about 1 large glass of dry white wine (about a glass per two pound bag). Close the pot tightly and cook over medium heat for about 10 minutes. Add a generous amount of finely chopped parsley or cilantro or basil and also garlic it you would like your dish stronger and especially if your meat was not already spiced.

Mix it all up and let cook for two more minutes. Please do not over cook them, or they will become rubbery. At this point all your mussels are open and ready to be eaten!

Serve in soup plates with a lot of fresh bread to dunk into the broth. Eat them with your fingers and use the shell to scoop out morsels—If you are from Bay Ridge get Country bread at Yanni’s Restaurant on 4th & Ovinton.

Voilà! and now please do watch another one of my homemade videos. The Country Mussel  recipe was literally filmed with the left hand while cooking —and then eating, just watch until the end! with the right one.  I didn’t know I could do this until today.  Honestly tell me if it is watchable and/or helpful. 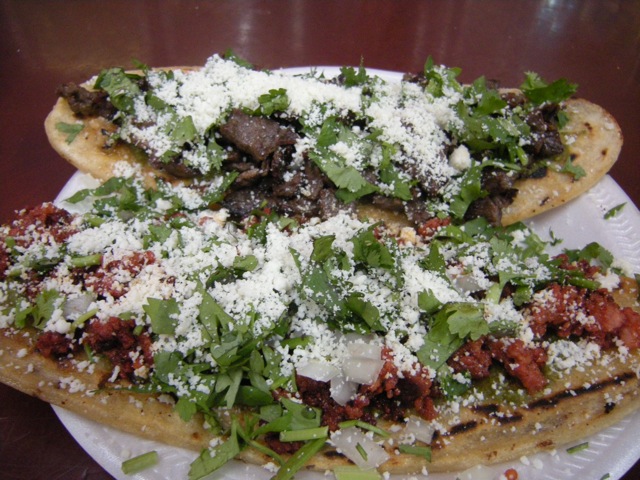 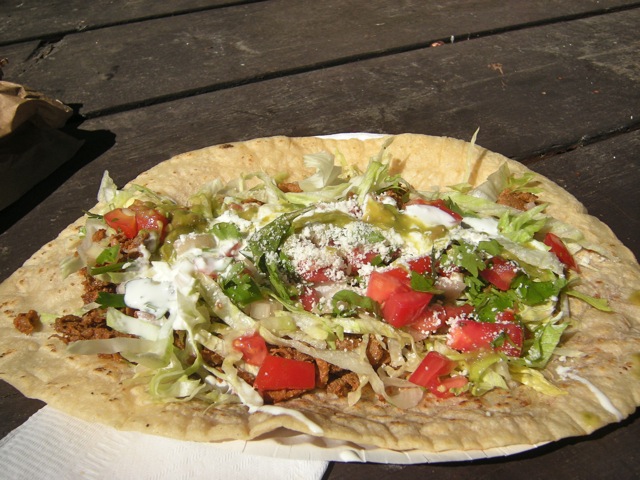