Some pix and comments from the events mentioned in the blog  “busy week“.
April 27-28 I played Claudine in The Cry, a vignette film, part of James Mehr’s  project Veritas that will be on line soon.

on May 1st I had a great time performing Voyage dans la Lune at the Neo-Benchi and Experimental Video Night at Dixon Place. I enjoyed watching the brilliant pieces by: Sharon Mesmer, David Larsen, Linh Dinh, Brandon Downing, Abigail Child & Nada Gordon, Konrad Steiner, Julian Brolaski. Nada Gordon posted  capsule reviews on her blog and I totally agree with her and Drew Gardner: Yes! moonmen being smashed into powder is a “colonialist” attitude! Thank you Pierre Joris for a great narration, Peter Knoll for the beautiful guitar soundscapes, Chiaki for the pictures, & Brandon Downing for putting the event together. 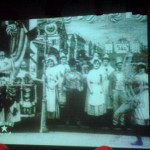 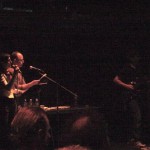 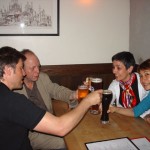 On Saturday May 2nd was the much anticipated Brooklyn Food Conference. I didn’t see much of it as I spent from 12-9:30 pm in the kitchen along with a wonderful crew of people, mostly women, preparing and serving lunch and the banquet dinner for the conference. Though I did attended the panel Gastropolis: Food and New York City while the kitchen was having a little downtime between lunch and dinner.  This panel was moderated by Annie Hauck-Lawson, co-editor of the book of the same name, and I was delighted to hear the speakers whose names I have known for a while but whom I’d never seen in person: Cara De Silva, Jonathan Deutsh, Mark Russ Federman, Anne Mendelson, and last but certainly not least Annie Lanzilotto. The presenters mostly read from their essays in Gastropolis: Food and New York City. The book is about New York City’s rich food heritage, & explores the personal and historical relationship between New Yorkers and food. I can’t wait to read it. 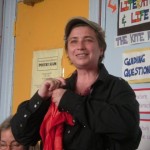 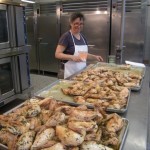 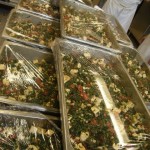 For a brief review of the Food Conference read:
Hundreds showed up for the Brooklyn Food Conference
Diner’s Journal: Hundreds Get the Message in Brooklyn
By By Kim Severson
Published: May 2, 2009
and for more conference pix click here.

And to cap the week, yesterday May 3rd was the 5th Annual d’Artagan Duckatlon, a culinary competition where top city chefs present their best team in costume to compete in a series of challenges throughout the meat packing district. Restaurant Annisa came in first place after a most elegant and brilliant performance; second place went to Tribeca Grill with a very motivated and gracious team; third and sweetest was Jacques Torres. Last year’s winner Cercle Rouge won best costume and gave very entertaining and smokey performances throughout the afternoon.

I will post the video as soon as Joseph Mastantuono is done editing it — he is already working on it. I can already tell you that there were some really funny moments! Meanwhile more pix here.

LAST MINUTE NOTE:
We just found out that the short film Counting to Infinity directed by Derek Morse, in which  Miles Joris-Peyrafitte played Seth (lead role) has been selected in the Cannes Festival Short Film Corner!