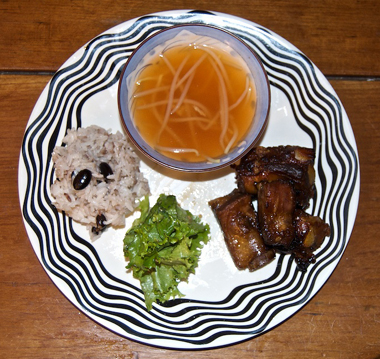 Last night we were invited to dinner at the home of Joseph & Yoori. Joseph Mastantuono is my older son, and two years ago he and Yoori Kang got married. I am so blessed to have such an incredible daughter (don’t like to say in law, daughter in love would be better!). Yoori came from Korea to study art about 10 years ago; she is a very accomplished cook and I must say that she enchants me with the flavors of Korean food. Joseph and I immigrated from France in 1987. He learned how to cook very young from being with me in restaurant kitchens, It feels like Joseph always knew how to cook, and when he went off to college he cooked for himself very competently and economically. When Joseph and Yoori invite us for dinner usually she or he cooks, but last night it was a combination of both their cooking.

Joseph made Hoisin and Honey Pork Riblets (Gourmet, 1992), a recipe handed on by his good friend Pedro. They were excellent, the sweet & sour marinade & the perfect crispy broiling make for almost addictive morsels: you can’t stop eating them! The contrasting texture of Yoori’s rice & beans opened the palate to subtlety of the ribs. I noticed that the black beans where unusual, Yoori told me that they came from a family farm in Korea, and were sent by her mother. Their Korean name is: 서리페 (suh ree pae). I am curious to find out more about these beans that have a black skin, are greenish inside and have a chestnut like taste.

But what upgraded this meal from excellent to brilliant was 콩나물국 (kong namul guk), a fish & vegetable broth with julienned bean sprouts served cold. A little sip of broth between mouthful of the ribs & rice allowed th palate to reset & refresh for the next one, an experience similar to the concept of pickled ginger between sushi or sashimi.

I ate the salad at the very end as I was so enraptured with the ribs, the rice and the broth. But I do like the salad before desert, this is a French way of having it. For dessert Yoori cut up some nice & crunchy watermelon and while the guys had Armagnac I had green tea.

PS: Joseph is an online editor and a post-production manager also one of the 4 editors of funnybookbabylon an online podcast on comic books.