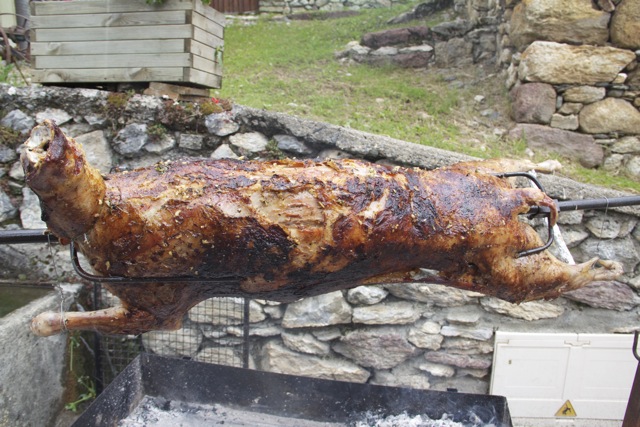 Cooking on a spit was the theme of Pierre’s 65th birthday. After the cake on the spit (see previous blog here),  voilà the lamb on the spit a.k.a méchoui! According to the Robert historique de la langue Française the origin of the word méchoui is: “Borrowed (1912) from the Arabic maghrebien mešwi “roasted, grilled; lamb roasted on a spit”, past participle of šawa (شوى ), to roast, to grill”.   This dish is very popular in North Africa where  Pierre lived several years.

As we still are in the village of Bourg d’Oueil, in the heart of the French Pyrenees, the lamb will be  provided by no one else than our neighbors & friends, the Jamme family.  The 17 kgs (37,5 lbs) lamb, fetched from the nearby mountains a few days before, is “un broutard” or a “grazer”; that is a lamb that had passed the nursing stage and is already grazing. And now the photo log of an another amazing communal food experience:

The day before our friend André brought very dry wood he had split for the occasion & the spit that Marc had fetched from Yves the butcher. In the late afternoon I went to the Jamme’s house to rub the lamb with a thick marinade of olive oil, garlic, wild thyme, salt & piment d’Espelette (chili pepper from the basque country); then we returned the lamb to rest overnight in the walk-in cooler. 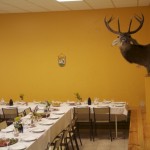 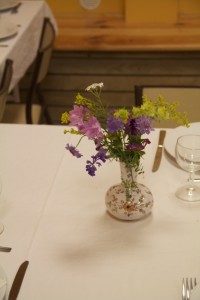 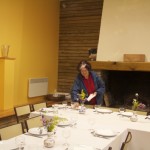 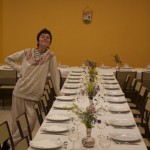 Now we went to the village hall multipurpose room to set up the tables. The meal will be inside, since we knew the weather was not going to be warm enough. As no rain was forecast, so the aperitif will be served outside. With Sylvia Gorelick —who made all the bouquets with wild flowers she had gathered in the fields near by— Marie Jeanne Jamm, — who brought additional sheets to cover the tables— Maïté & Michou — Pierre’s sister — set up a beautiful banquet table for 50 people. The event was becoming more elaborate as I had planned.  As we got closer to the date the eating of the birthday lamb as a casual outdoor buffet turning into an elaborate banquet.

On d-day: I am up at 7:30 am to set up for the méchoui. My neighbors Robi & farmer Roland Jamme (remember him from the cake) arrived shortly thereafter. Together we start the fire, strategize and go get the lamb prepped as best as we can to avoid any complication during cooking. 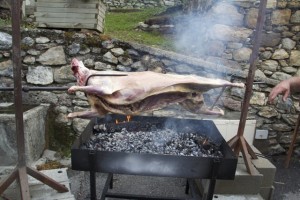 That’s it! it is 9:45am the beast is on the spit, as we have a manual spit, it is going to be crucial to have someone monitoring, turning & basting —w/the same marinade as above— the lamb & adding coals to the fire. Robi & Roland have set up a second fire next to the méchoui were they burn logs to turn them into charcoal, which they add under our lamb in order to keep an even fire. 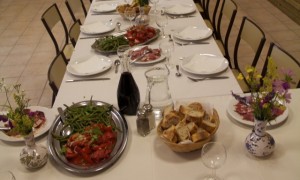 I had nothing to worry about as Robi, Roland & now Pierre were fully in charge of the lamb. Accompanied by the same crew as last night we are setting up for cocktail hour & hors d’oeuvres. Joseph Garcès, who was Maitre d’H at the family hôtel for 14 years, came right on time to slice the magnificent bellota ham —acorn fed pig—  shipped to us by my nephew Vincent from a small Spanish farm. I had also prepared salads of heirloom tomatoes and organic haricots-vert that we set up on the table along with the ham. The fragrant cantaloupe from the Gers will be passed around once people are seated. 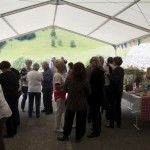 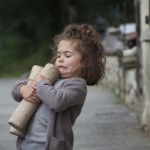 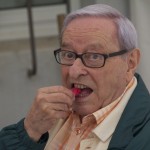 It is around 12pm and guests are filling in. They are “appetizing” on cherry tomatoes, patés, salamis, radishes —here my 89 year old father is particularly enjoying them— while sipping the pleasant Marquisette, a cocktail make by Maïté & Robi — wine, vanilla bean, lime & seltzer, served by Marie-Jeanne Peyroulan an old time friend who came from a near valley with her son Teo who played a lot of “Quiller” —an ancient version of bowling— with my adorable niece Lou.

It is now 1 pm and the lamb is cooked! My brother Jean-Louis will assist Roland, Robi & Marc for the carving while my nieces Mag & Isa will pass the cut meat to the guests. To serve with the lamb, my friend Paulette made the most tasty Pistache Luchonnaise ever—a white bean & lamb stew with pork rind — a specialty of the Comminges region— Paulette’s Pistache almost stole the show from the Méchoui and the cóca! Unfortunately no pictures were taken as every body was too busy eating. We had seconds & some had thirds. We took a little break and had a cheese course. Not any kind of cheese, no, a Poubeau cheese if you please! Read about it here. It was a perfectly aged one; Joseph Garcès is on a “cheese plan”; that is that he reserves a full wheel six months in advance and lets it age in the cheese maker’s cave. Joseph offered his reserved wheel to Pierre for his birthday party! 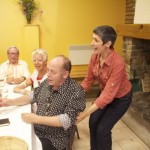 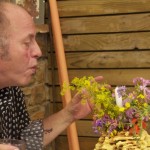 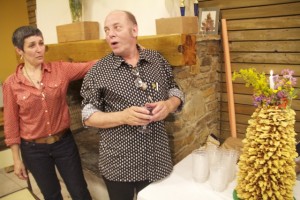 It is now about 4pm and about time to present the birthday boy with his very special cake. After singing Happy Birthday, we serve the cake with crème anglaise, all the details about the incredible ancient cake are here. More singing was done by Miles Joris-Peyrafitte, Sylvia Gorelick, and a special tribute to Pierre by Joan-Francès Tisner & family who had come all the way from the Béarn. After coffee, Armagnac & Mirabelle —Thank you Michou & Julien for bringing the real stuff from Luxembourg! — it was about 6pm when the last guest left!

All of this could not have happend without the  amazing help of the family & a tight community of friends. Special thanks to the Jamme Family, Joseph Garcès & Paulette, Robi Castebrunet & Maïté, Conso, Michou, Marie-Jeanne, Domenja, Marie-Jo,  my parents Jean & Renée Peyrafitte, the Toucouère family, André, Marc & my brothers: Jean-Louis for his carving assistance and Pierre for the pix, Miles, Sylvia, all the wonderful guests & last but not least to Pierre whose birthday gave me a great opportunity to throw a party. MERCI! 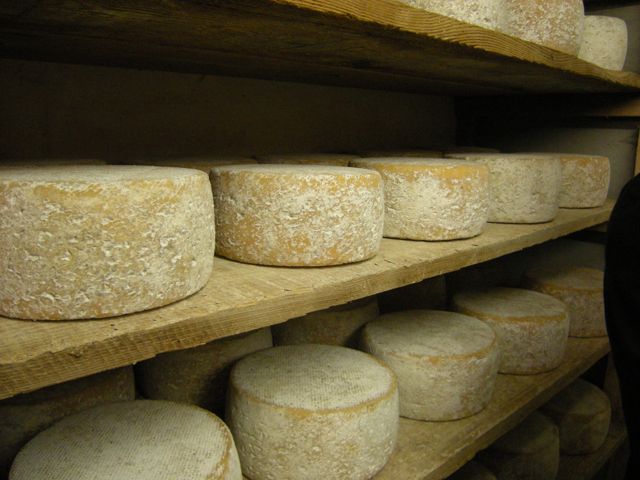 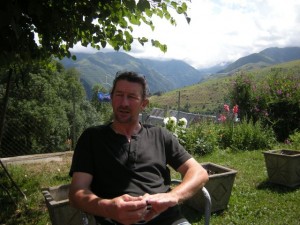