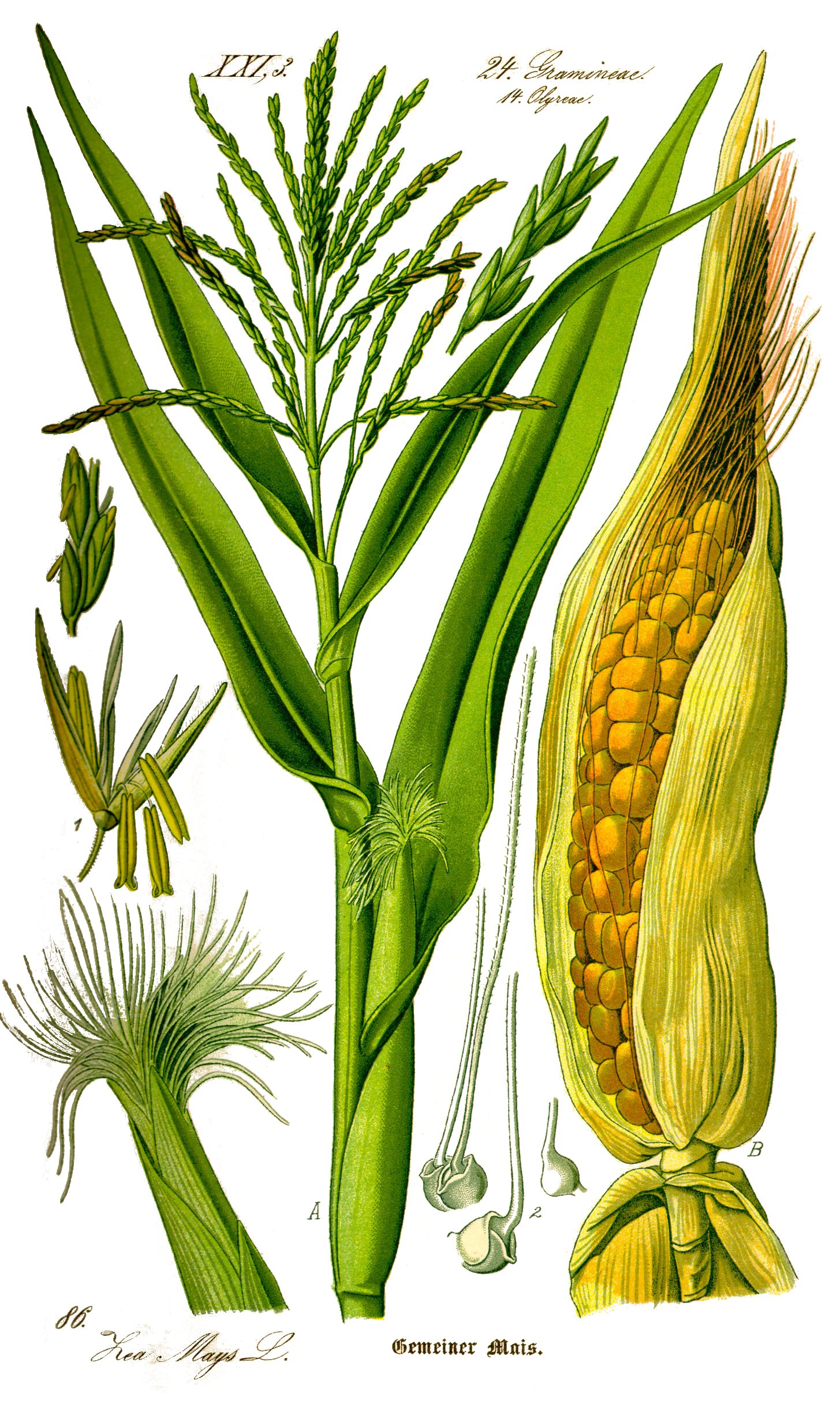 When Colombus discovered the existence of corn (maize) in November 1492 on the island which today is called Cuba, he noted in his diary that “there are large cultivated areas which produce roots [cassava], a sort of bean [the haricot], and a sort of grain called maize.” He certainly had no idea that maize was already ruling the entire Americas, being under cultivation from southern Canada to lower South America. Mahiz is the phonetic name Colombus picked up from the natives. When European botanists began to list maize in their indexes, it became Zea Mays, Zea being a Greco-Latin generic name for wheat like grains and Mays the Latinized version of the original Taino name mahiz which means “life-giver”. How appropriate, maize being the most productive of the grasses but also the only cereal which cannot reproduce itself without the aid of men.

So how did maize become domesticated? Well, do not expect me to give you a precise explanation of the mysteries of the origin and domestication of maize when the “professionals” have been fighting over this issue for half a century. In her book The Story of Corn, Betty Fussel dedicates an entire chapter to the “Corn War” that started in the 50’s. One school, led by Havard Prize winner Paul Mangelsdorf, believed in — and searched for — the “primal ear,” convinced that the ancestor of cultivated corn was some kind of ur-corn. The other school, led by Nobel prize winner Georges Wells Beaddle, discovered through chromosomal interbreeding experiments that corn evolved from a kindred grass called teosinte, a wild grass still found south-west of Mexico City. This seems to be today’s consensus:

“Everybody agrees that domestic corn began about ten thousand years ago and that the place was Mexico and that present-day corn came, one way or another, from the interbreeding of teosinte and maize.”

Thus Garrison Wilkes of the University of Massachuset as interviewed by Betty Fussel. The explanation of how it happened is however still in the ground, and even though archeologists, scientists and botanists all believe that Mexico is the cradle of maize, the oldest — 7,000 years old! — carbon-dated trace was recently found in Panama.

What we do know for sure is the profound cultural/economic importance of maize. The Encyclopedia Britannica, for example, describes it as “the grain that built a hemisphere”. For the Incas, the Mayas, the Zapotecs, the Aztecs, the Zunis, the Iroquois — to only name a few — maize was also a core element of their spiritual life. As Eduardo Galeano was aware long ago:

Guatemala City, 1775
Nor do the Indians come to Mass. They do not respond to announcements of the bell. They have to be sought out on horse back in villages and fields and dragged in by force. Absence is punished with eight lashes, but Mass offends the Mayan gods and that has more power than fear of the thong. Fifty times a year, the Mass interrupts work in the fields, the daily ceremony of communion with the earth. For the Indians, accompanying step by step the corn’s cycle of death and resurrection is a way of praying; and the earth, that immense temple, is their day-to-day testimony to the miracle of life being reborn. For them all earth is a church, all woods a sanctuary.

The settlers called maize Indian Corn and when the grain reached Europe — 50 years after Columbus — it became known as Turkish Corn. At that time Turkey was often a convenient origin for unknown alien produce, flower or animal. There is a logical explanation though, as most of the New World produce entered the Old World from the eastern side of the Mediterranean basin and not as one might think through Spain, Portugal or Italy.

Since then the entire world diet depends on corn and the corn situation today would require several post. I intend to complete the article at some point.

The sweet corn that we enjoy throughout the summer should be eaten immediately after being picked because as soon as the ear is separated from the stalk the sugar begins to turn to starch. As Waverly Root writes in Food:

“Sweet corn is botanically green but gastronomically ripe…..Mark Twain recommended putting a kettle of water in the middle of the corn field, building a fire under it and, when the water begins to boil, picking the ears within reach and shucking them directly into the kettle”.

My favorite way of having sweet corn is a northeastern Native American recipe which I found in Cooking with Spirit by Darcy Williamson and Lisa Railsback:

“Pull husk halfway down ears of corn and remove silk and sprinkle with sea water. Pull husk back over and twist shut. Place over hot coals and turn frequently for about 12 minutes.”

Obviously, for those who do not live by the ocean, salted water will  have to do the trick. I use a bit of wire to keep the ear tightly shut. Don’t forget to turn it over frequently, then just add some butter and salt. After 12 minutes on the barbecue you will have the best corn ever.