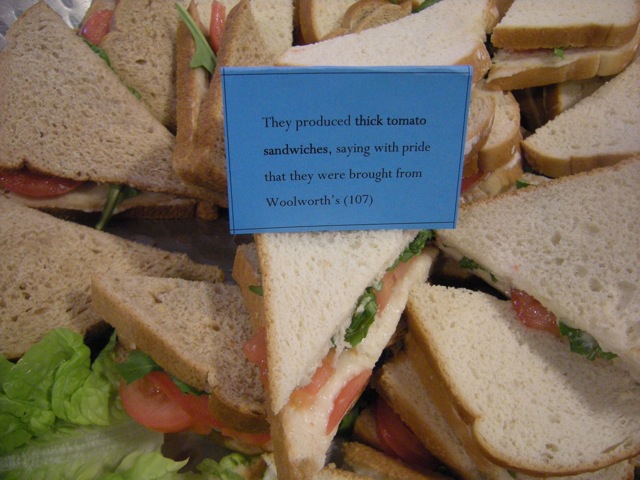 This month is taken over, not to say consumed, by my dear 19th century comrade, Augustus Saint Gaudens. The deadline for the French project is due in a few weeks  — thus very little time to do anything else.  Fortunately our good friend Charles Bernstein had an important birthday, so I got to take a break and travel to Philadelphia where on 8 April the Kelly Writers House at UPenn had a superb party for the occasion.  The readings were great and you can read & hear more about it on Pierre Joris’ blog and except for the performance by Felix Bernstein and Sherry Bernstein I focused on the food, are you surprised?

They are complete foodies at the KWH and it was splendid! Program Coordinator Erin Gautsche has her own food blog, Veggicurious.com, and  director Al Filreis looks like a gourmand to me! I wanted to record a very nice detail about the party: All the dishes on the buffet were references to Charles Bernstein poems! As noticed by the director, Charles’ poetry doesn’t include a lot of food elements so it wasn’t easy. They dug deep enough into the poems of All the Whiskey in Heaven to create a beautiful, festive, delicious & poetic buffet! See for yourself and click on the photo to enlarge.  Sorry for the poor quality of the video recording.