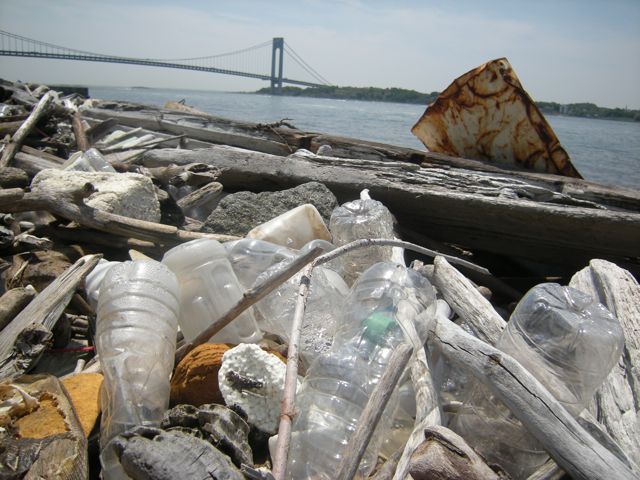 I walk along the Verrazano Narrows on Shore Promenade several times a week. On Memorial Day Shore Promenade was busier than usual so I decided to “catwalk” next to the water on the other side of the fence. It was low tide and I wanted to look at what had drifted into the boulders. Between 68th street and the Verrazano bridge there was only one patch of sea shells, but many, many clusters of empty plastic bottles. There is of course other junk, but the litter is mostly made of individual plastic bottles.
I work seriously on decreasing my use of plastic bottles, bags and packaging in general. I do have a few individual bottles saved, I fill them up with water from my filter carafe, keep them in the fridge and take one along when I leave the house. If I forget, I try to find a water fountain but occasionally I do buy a water bottle. Paying close attention to this insane accumulation along The Narrows increased my awareness and I’ll sure try to avoid the occasional bottle purchase as much as possible.

I try to imagine how did this place looked like before Giovanni da Verrazzano sailed through it in 1524. The Italian explorer, who was at the service of the French crown, wrote his employer King Francois 1er that he believed he had found the opening to the Pacific Ocean, therefore a direct route to China. It is reported that while anchored between Staten Island & Brooklyn, Giovanni da Verrazzano “received a canoe party of Lenape people”  and he called what today is called  The Verrazano Narrows in his honor: New Angoulème. The Lenape where hunter gatherers, not by lack of equipment or sophistication but most likely because the natural resources were so plentiful that they didn’t have to worry about planting, growing  or attending crop. It was all right there available for hunting, fishing & picking  (read Anne Mendelson Chapter “The Lenape” in Gastropolis: Food and New York City).

It is so painful to witness the current destiny of this so unique water-based environment. What was an osmosis between man and nature has became its antonym. Today, despite being one of the major water highways of the world — flanked with litter — The Narrows’ commanding views still moves me deeply. This is the mouth of the Hudson River, and one can feel the incredible elemental forces; remember that the Ocean tide is felt all the way to Albany!

The native name for the Hudson River is Mahicanituck, which means: the river that flows two ways. It was very shortly after I took my first walk there that I wrote the song that was in my CD The Bi-Continental Chowder / La Garbure Transcontinentale. I was still living in Albany and the next day I took the train back and kept filming along the Hudson. The video and the song are part of the live performance of The Bi-Continental Chowder / La Garbure Transcontinentale. Below is the recording and the video:

Another good reason not to buy bottled water is that beverage companies often take water from municipal or underground local resources: you are probably aware that about 40 percent of bottle water comes from the tap! Other negative factors are: transporting the bottles uses energy, increases landfill and and emits toxic chemicals.