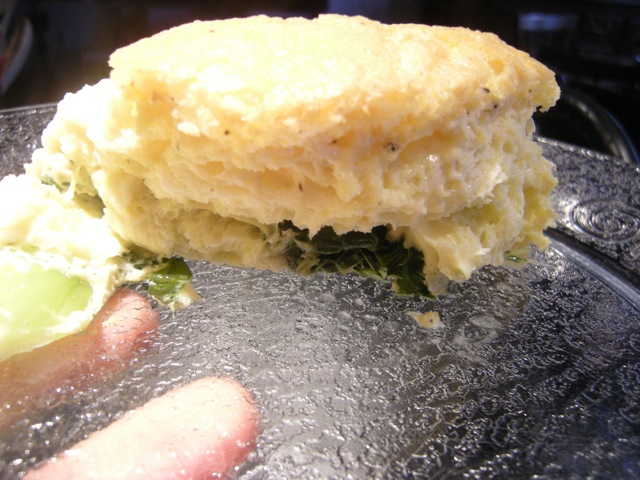 The bok choy in the fridge was calling for immediate attention. As it was Sunday and brunch time I felt like something a little more festive than bok choy and rice! Some sort of a soufflé came to mind. I preheated the oven to 375º. I sliced the bok choy vertically into 6 sections, then braised it in a mix of butter and olive oil with 2 cloves of minced garlic. While that was cooking,

I separated 5 eggs — yokes in one bowl and whites in an other. Pierre grated 1 cup of various cheeses he found in the cheese box. I whipped the egg whites very firm. Mixed the cheese with the previously beaten egg yolks, and added salt, pepper and nutmeg. Now folded half of the egg whites in the egg yolk + cheese mixture, then folded in the second half of  egg whites. Poured the mixture over the braised bok choy and put it into the oven for ?…sorry I didn’t look at the time — at some point I just felt it was done and it was! But it cannot be more that 15/20 minutes. This doesn’t come out as a real high soufflé but again I call it oeufs soufflés — not “SOUFFLAY”! It is very  good simple and stress free, unlike soufflay can be!

Another thing I have been doing is to keep a better record of the drawings I make at events — especially at concerts. Below are a few of the “blind” concert series drawings. I draw (almost) without  looking a the page and let eye and rhythm guide the hand. I also do take some notes on the back for possible later poems.

The Bill Frisell Series
Concert at Blue Note on February 28th 2010: Bill Frisell with Paul Motian and Ron Carter. This is a summing up of the note I sent to my friend Steve Dalachinski after the  concert:

..loved the set they played
it was very bare and beautiful
very essential, not too many notes!
so delicate…
carter seems to have difficulty breathing,
motian was doing his thing very well while frisell was carefully and tactfully tying and lifting them up…
it works better for some songs than others but overall it really did and it filled my soul.
also it was my first time seeing them live and i just couldn’t get my
eyes off carter’s fingers… so loooong, so square… a giant’s hand! and
the way he uses them on the bass…..

The Matthew Shipp Series:
This concert was yesterday, Sunday March 14th, at Gathering of The Tribes, that is Steve Cannon’s magical place. We gathered at 5:00 PM and the concert started at 5:30PM with as an opening surprise a short snippet featuring the Nicholas’ brothers —see video below– from the 1943 movie Stormy Weather. Though it happens in a liminal time and space, the connections between  Matt Shipp and the Nicholas’ brothers reveal immanent evidences. Matt Shipp’s dexterity, agility and  feline playing has the same mesmerizing quality as the brothers’ dancing. I didn’t time the concert but my attention didn’t drop or drift for a single minute. Matt takes us onto a musical journey that deliberately references several genres played at once with a sheer emotional clarity that can make you laugh or cry and even laugh & cry at once. At some moments it felt like he was channeling Satie & Bach playing Fly me to the Moon together! One of my favorite Shipp recordings is on his latest CD 4D. It takes the old repetitive (stupid) French song Frère Jacques and manages to turn it into an obsessive frightening dramatic Hitchcockian episode.
Voilà! If you want to see the drawings at a better resolution just click on them. 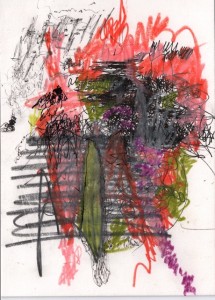 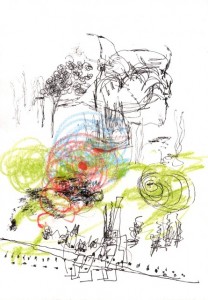 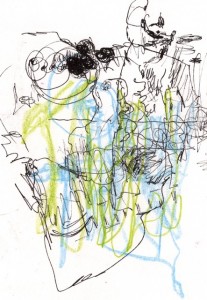