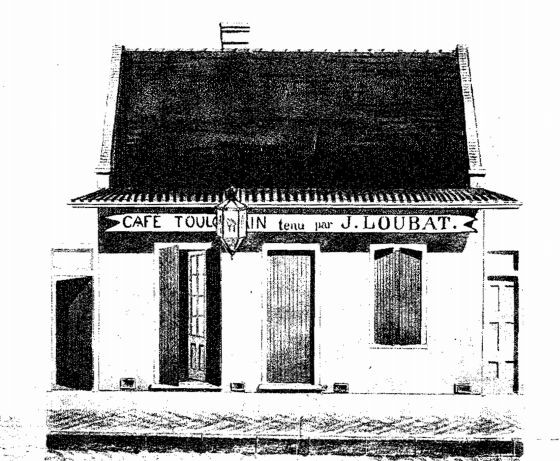 A couple of years ago I submitted a project for the 21st Joint Annual Meeting of the Association for the Study of Food and Society (ASFS) that was going to take place in New Orleans, Louisiana in June 2008. My project was: From Toulouse (Occitania-France) to Toulouse Street (New-Orleans). The proposal got accepted but I had to withdraw as scheduling and funding didn’t work out. However, I haven’t given up this idea  and I keep adding elements to my files. The idea started when I found out that in 1850 there was a restaurant called : “Le Toulousain” on 732 Toulouse Street, next to Bourbon street, in the French Quarter in New Orleans . 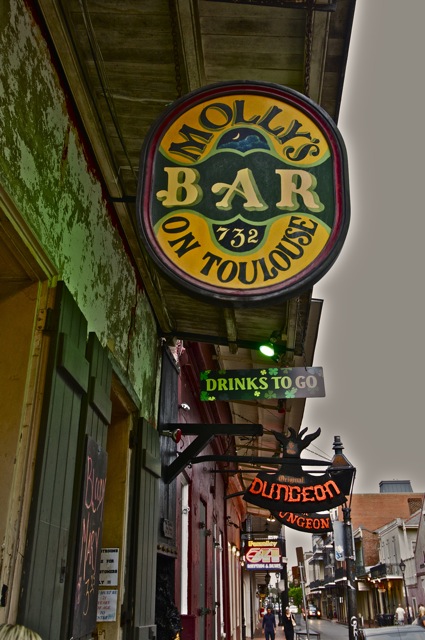 Café  Toulousain is long gone and is now an Irish Pub called Molly’s Bar. I stopped for a drink, but didn’t see any apparent vestige of the old restaurant. The top picture  is a drawing of Café Toulousain circa 1850 where you can read the name of the owner : J. Loubat. The name is common in New Orleans and so it is in Southern France.  Toulouse is a city in Southern France though Toulouse street was not named after it, but after Louis-Alexandre de Bourbon, Comte de Toulouse (1678-1737). He was one of the many children of Louis XIV born out of wedlock (17 are accounted for). Le Comte de Toulouse was the 8th child born out of the king’s relationship with La Marquise de Montespan, whose husband was from Gascony and never recovered.   The Comte Dumaine was the second born from that “bed” — as the French say —  he also got a street named after him in the French Quarter. Toulouse & Dumaine streets run parallel  two blocks apart and are oriented South-Est to North-West. 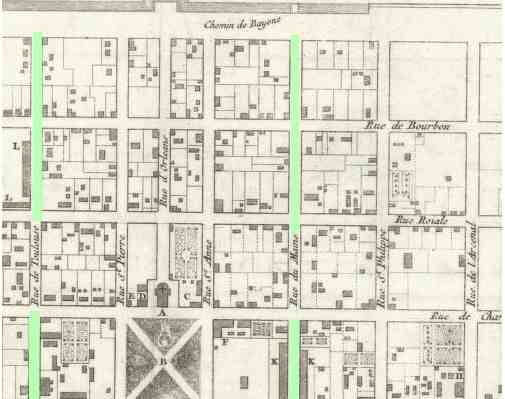 I am looking forward to dig more into the history of 732 Toulouse Street and I am determined to find out what was on the menu. Were they serving cassoulet? I bet they did!

Another intriguing piece of information I gathered while digging for the Augustus Saint Gaudens project at the New York library, was that a woman named Elvira Peyrafitte (also my last name) was buried at the St.Vincent de Paul Cemetery in New Orleans on December 5th 1915. My mother who keeps our family tree had no records of her. It turned out that the name was most likely Peyrefitte and not Peyrafitte, as mine is. One  thing is sure, both names have the exact same meaning:
peyre,peire/a —from the latin & occitan : stone;  and hitta/o/e (gascon) or fitta /o/e (eastern occitan) : raised.
Yes! my name means:  raised stone or menhir!  Anyhow, even if Elvira was not closely related I decided to try to find her grave.  I traveled by street car & by bus  to the non-touristy neighborhood of Bywater/St.Claude. 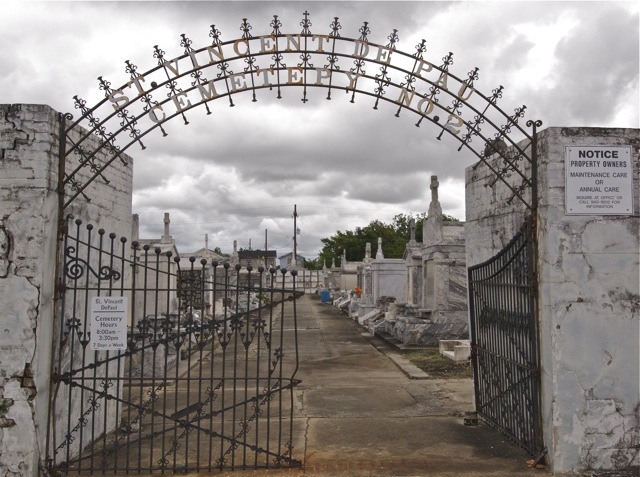 The neighborhood was deserted and the cemetery had no living soul except me. Not many graves were kept up. The only flowers were artificial and discolored. It is an old cemetery and here is some info gathered on the website  www.nolacemetaries.com:

These cemeteries [there are 3 Saint Vincent de Paul cemeteries next to each other] were laid out by Pepe Liuia, the famous fencing master of old Creole days. He was connected with the famous Dueling Oaks in city Park [showed in my last blog]. He was well known for teaching New Orleanians fencing skills and encouraged them to engage in mortal combat just for the sake of showing the art. He eventually settled down in the old farm section of New Orleans of what is now known as the St. Claude neighborhood. Some residents still refer to it as St. Vincent De Paul Parish. 6 years after the erection of the parish church, St. Vincent De Paul in 1838, Pepe cut his ground into cemeteries and named them after the patron saint of the parish. The tombs are built in the same order as those of ancient French cemeteries. Pepe Liuia, his wife, and his only daughter are buried here. His home bounded by Clouet, Louisa and Urquhart streets is still overlooking the cemeteries. 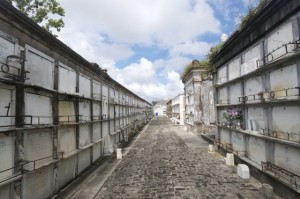 I often visit cemeteries alone and abandon myself to the particular energy  that emanates from them. But this one was triggering some awkward and a tad spooky feelings, especially when I entered the “oven vaults” section shown above. There was  long rows of graves, sometimes as much as one hundred of them, with four “ovens” stacked on top of each other up to a height of about 10 feet. I was literally surrounded by long time dead people.  I had to rethink my whole relationship to cemeteries and realized that in most cemeteries we look “down” on the dead.  Here they were all around and looking down to me! I adjusted and surrendered to the new experience and  I got quite excited when deciphering several graves written in French with names  that were very familiar to me. 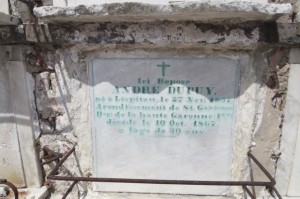 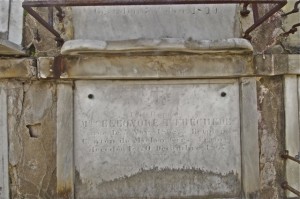 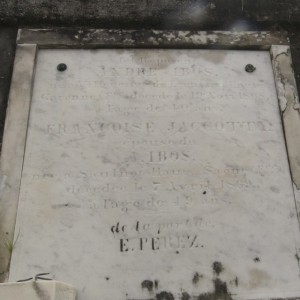 I couldn’t locate Elvira —the grave location was not very clear so I might have missed it or her tomb stone  was missing, this area had been severally flooded during  hurricane Katrina and some “oven vault” stones are missing— but I sure found some other fellows from my beloved Pyrenees!
There was André Dupuy, born in Lespitau —canton de Saint Gaudens— on November 27, 1837  who died on October 10, 1867. Was he friends with Eléonore Fréchède, born on November 5th 1838 who died on December 20, 1867? She was  born in Betplan in the Canton de Mielan about 50 miles away from Lespiteau. Did they go dancing with André Ibos?   André was born in Villeneuve de Lécussan and died November 19th, 1868, he was 40 years old, about 10 years older the other two. André & Eléonore died the same year, André Ibos the following year. Did they travel together? Did they work at the same business? Did they hang out at Café Toulousain? Where they friends of J. Loubat? All I can say is that is was another inspiring & humbling time to think of their journey. And if their graves were marked so consciously with their place of origin it was for a reason: they wanted their “paìs” to be remembered. I can relate to that, I like calling myself a Gasco-Ricain, to give a better indication of where exactly I am from. My identity doesn’t come from a “country” but from my geography as (etymologically) “earth describe-write.”
I can smell a performance project on my stove;  The Transcontinental Étouffée / Eth Estouffat Transcontinental! To be continued…
The sky was darkening, rain drops started marking the ground.  I made it in time to the bus stop to catch the bus right before the downpour began. I got off at Esplanade and Nth. Rampart, it was still raining so I stopped at the first restaurant/bar in sight. It was Buffa’s Restaurant & Lounge, the place felt like a neighborhood hangout. The TV, blasting some series or other, kept the waitress and the two customers riveted. The waitress brought the menu keeping an eye on the suspense. The menu had regular bar food offerings and I was about to settle for a salad when at the bottom I read: Rice & Home made Beans $8 add a sausage $10 — perfect! That is what I needed, beans and souls are so closely related! Had I known how much pork was already in the beans I might have skipped the sausage, but I ate my entire plate, except for the bread! I also ordered a glass of red cab from Oregon to complete my communion. I felt so satisfied and so content. An immanent sacrament where a visible sign of an invisible reality occurred. As I said in the first post:  if one is attentive & tuned in,  a timeless, boundless & profound journey is all yours in New Orleans!