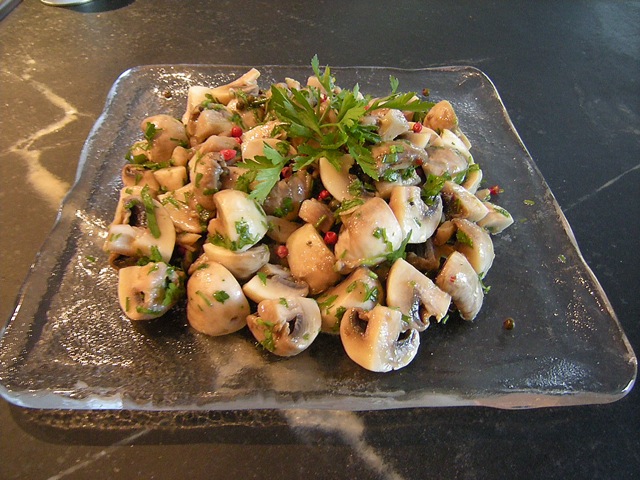 All I wanted to do was post a quick recipe for Labor Day:
A raw mushroom salad marinated with pink & green peppercorns. Little did I know! I took the photo a week ago, the ‘shrooms are long gone but I am still marinating in pepper! 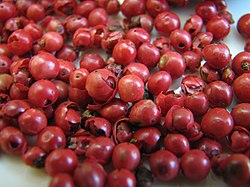 First, I confirmed that green pepper is the unripe Piper nigrum or black pepper that is mostly cultivated in Madagascar. Then I looked into pink peppercorn Schinus terebinthifolius: a faux poivre – a fake pepper. Originally from South America the Baies Roses plant is today cultivated on Reunion Island. And the last thing I was going to look into the “Dictionnaire Universel de Cuisine et d’Hygiène Alimentaire” by J. Favre — & there (re)appears the fascinating Monsieur Pierre Poivre.  Oui! le poivre, pepper in French, was named after Pierre Poivre.  In English that would be Mr. Peter Pepper. He was also known as Peter Piper or le missionaire des épices — the missionary of spices!

Pierre Poivre was born in Lyon (France) in 1719 (where he also died in 1786). After studying botany and Latin he was sent to Paris to enter the Seminaire des Missions Etrangères (Foreign Mission Seminary) to become a priest. He thought his vocation was to evangelize the Far East —little did he know.  Before getting ordained he was sent on an initiatory voyage to China. The trip was more than eventful: it coincided with the Jesuits been kicked out of the country. He was arrested & sent to prison. In order to plead his case he learned Chinese. He was brilliant and officials ended up granting him permission to visit the country.  His taste for adventure put a serious damper to his religious vocation. He visited many places among them Cochin China (Vietnam), Macau, Canton and was totally fascinated by their botany, agriculture and commerce. In 1745 he had to return to France to get ordained but fate struck again. The English attacked the ship he was on, a cannonball hit his wrist and amputation of his forearm was inevitable once he landed on Batavia Island (Indonesia) where the Dutch helped him out. That ended his priesthood carrier and more sadly his painting carrier —though I haven’t yet found any samples of his work, he had the reputation of being an excellent painter. While recovering on Batavia Island, he studied the native plants and the idea came to him that the French should grow their own spices in order to bypass the Dutch monopoly. 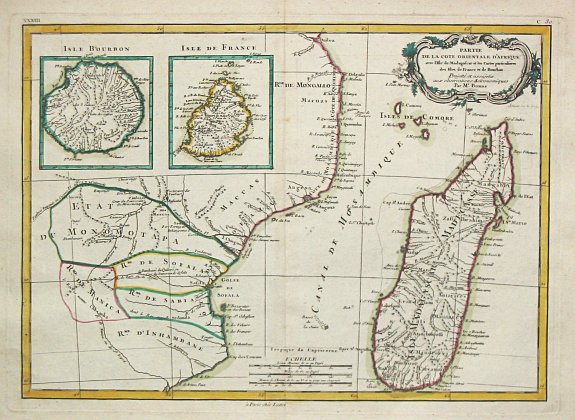 And that’s exactly what he did in 1767 when he became Intendant  des Isles de France et de Bourbon — the French colonies situated in the Indian Ocean south of Madagascar today called Mauritius & Réunion. One of his claims to fame was to transfer spice trees from the Dutch Indies (pepper, nutmeg, cinnamon, clove and many others) to the French colonies. Pierre Poivre was associated with the physiocrats (physis, nature, kratein, rule). The physiocrats are regarded as proto-French revolutionaries; they proposed to benefit agriculture by implementing a system of economic freedom. Poivre was against slavery and he is considered one of the first environmentalists who created and implemented the first environmental laws. Fear of climate change was already a concern and linked to deforestation. If you want to know more about the historic of environmental concerns read this Harvard Seminar on Environmental Values by Professor Richard H. Grove here.
Pierre Poivre married Françoise Robin, who was about 30 years younger than he,  and they had two daughters. It is interesting to note that nine years after Pierre Poivre passed away, Françoise Robin Poivre remarried Pierre Samuel du Pont de Nemours, who was the one who coined the term physiocrat —The du Pont family fled France for the USA during the revolution where Éleuthère Irenée du Pont, her second husband’s son, established the gunpowder manufacturer E.I. du Pont de Nemours & Company. Today Dupont is the second largest chemical company in the world.

Pierre Poivre wrote an extensive memoir:  “Voyage d’un philosophe ou Observations sur les moeurs ou les arts des peuples d’Afriques, de l’Asie et de l’Amérique” filled with acute observations, pertinent information and political & naturalist perspectives. As I stated above, Poivre is still regarded today as the avant-garde of environmentalism and his texts are still studied  —see Richard H. Grove article for more details.
In 1984 I visited Les Jardins de Pamplemouse on Mauritius Island. Since then the garden that was constructed by Pierre Poivre was renamed SSR Botanical Garden. I remember the visit fondly, though at that time I had more scattered interests and didn’t pay enough attention.  I should still have pictures and recipe somewhere in storage and am tempted to go dig them out, even if they belong to a segment of my “romantic” life I don’t care much revisiting.
To be continued? Will see!

Meanwhile there is the recipe that you can adjust to your own taste:

1 lb of very fresh button/white mushrooms
1 lemon (juice)
1/2 cup extra virgin olive oil
2 teaspoon pink peppercorns
2 teaspoon green peppercorns
—dry or in can. If you use the canned ones you can add 1 teaspo0n of the vinegar they marinate in.
1/2 cup roughly chopped parsley
Salt & ….pepper? just a dash!

Prepare your marinade with all ingredients except the parsley.
Clean & cut the mushrooms in quarters (top only, use bottom in a sauce.)
Toss the mushrooms  in the marinade.
Save in the fridge for up to 48 hours.
Toss in parsley before serving.
Garnish with a sprig of parsley and a few pink peppercorns

One thought on “Lost in Pepper!”