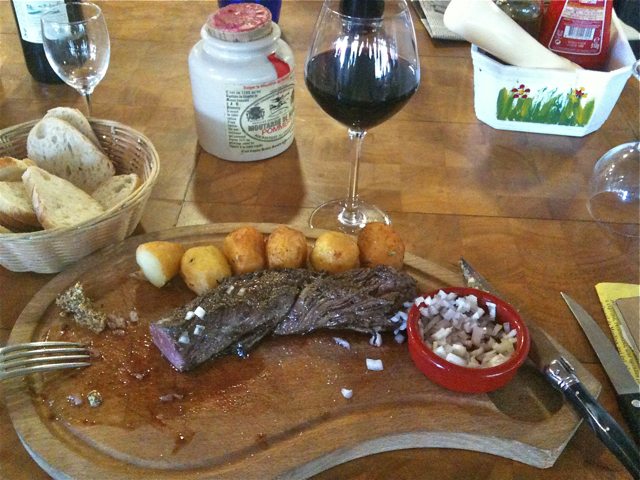 I left my hometown of Luchon this morning to travel back to Paris. I had a 5 hours lay over in Toulouse in order to catch the cheap €29.29 iDTGV.  I locked my belongings at the “consigne” and took off.

I lived in Toulouse in two occasions: In the mid 70’s while being a student at Lycée Raymond Naves and in 1983-84 while trying to be an actress. These times were certainly not the rosiest of my life. As a student I lived at the home of an extremely rigid & dark family where I felt inadequate & stupid most of the time. As a pretending actress the situation was no better, despite landing a small role at the famous Grenier de Toulouse. I had troubles hiding my accent, I was  bold —in many ways as I shaved my head at that time— untrained, uneducated and I was also mostly focused on my son Joseph then a toddler.  I had separated from his father when he was less than two years old and my pride was to take care of him myself. I was 24 years old had already been a clerk at a pharmacy, a chef/restaurant owner, a door to door vacuum cleaner salesperson, but wanted my dream was to be an actress as I had done a lot of acting in high school. Well it didn’t work the way I had envisioned though my first, and only, professional role at the Grenier was to be a waitress in the Arnold Wesker play The Kitchen! That might explain why I wasn’t fit for it…I thought I knew how to be a perfect waitress and could carry it on stage, but I totally missed the point it was not about being “real” but about to be theater real and I was certainly not prepared for that.

Anyhow I have returned to Toulouse many times since then, & performed several of my shows there: Deplacements with Pierre Joris, Ninon at the Cave Poésie & The Bi-Continental Chowder/ La Garbure Transcontinentale at the Festival Occitania. Toulouse is also the inevitable transit hub to Luchon —about 1h 1/2 south, straight toward the high pics. 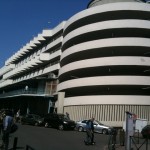 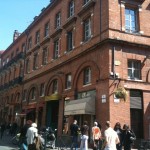 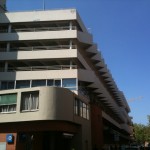 Today was the first time in years I was there alone. I had no friends nor family scheduled to see & a very strong desire to let the city carry me. The day was beautiful, I walked along the Canal du Midi for a while and then directed myself towards downtown thinking that I might enjoy getting some lunch on a terrasse around place Wilson. When I crossed the boulevard I noticed the sign for Marché Victor Hugo and followed it. I love markets and this one is very special. Unfortunately as it was around 1h30 PM it was closing time. I still got a glance at the beautiful meat displays, so fresh, so perfect. I also remembered that there was great restaurants on the mezzanine above the market and last I stopped there in 2007 I bumped into a childhood friend, Christian Lazorthes,then known as Kiki, he worked at Le Louchebem.

Sure enough he was still there, I spotted him out right away, set myself at the bar, he also recognized me immediately & that is alway reassuring! I asked him for a spot and he sat me in his section of the communal table. He brought me a glass of Tariquet for apperitif and advised me to eat a piece of onglet roti —hanger steak— with raw shallots & round new potatoes, I made sure I wasn’t getting frozen fries — as in the USA, most of the french restaurant now serve frozen fries, please help me put pressure on the abolition of frozen fries!—. While I was waiting for my plate a man sat across the table from me. We exchanged a few banalities, that ended up not being so banale because something made me understand that he spoke occitan. I asked him about it and he said yes of course. After that almost our entire conversation was conducted in his beautiful perfect occitan and in my broken pyrenean gascon. While eating the most delicious hanger steak with Mustard of Meaux, I found out that we had many common acquaintances. Once of them the occitan scholar/philosopher Alem Surre-Garcia, I have been very inspired by his work and was glad to find out that he had two new books out: ARCHIPELS ET DIASPORA : ESSAI D’ÉMANCIPATION La théocratie républicaine & LA THÉOCRATIE RÉPUBLICAINE Les avatars du Sacré. I went to buy them at Ombres Blanches (Best bookstore in Toulouse and maybe in France) as soon as lunch was over.

My new acquaintance, Jacme Delmas, turned out to be a radical occitan writer author of the blog: http://democraciaoccitania.blogspot.com/ and contributing editor at El Triangle an independentist Catalan newspaper. A very passionate man that has put a lot of thinking and practice of being an occitan. I had a great time, it was energizing to be able to feel the depth of my culture and feeling totally inside of it even though I Iive so far away from it. Once again my favorite mantra “Things fall where they lie” & my identity as a Gasco-Rican were confirmed! Mercés Jacme per la conversacion, eth partatge de la passion del país e espèri que me mande al puslèu l’explicacion dera prononciacion de Jacme.  Adishatz! 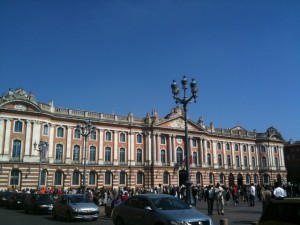 0 thoughts on “Loose in Toulouse”