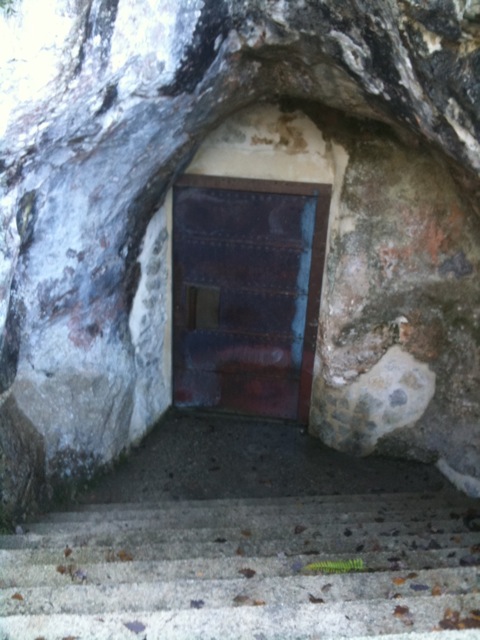 It is humbling and powerful to walk through the entry arch of the Gargas Cave. For thousands upon thousands of years humans have entered the cave through this very opening. The Cave of Gargas is situated in the central Pyrenees, 40 minutes away from my hometown. Though mostly famous for its panels of stenciled hands dating from the Gravettian period (between 28,000 and 22,000 years ago) Yoan Rumeau, curator of the cave, explains that the cave has seen traffic for way longer than that, and even though the hands are the more dramatic artifacts, the engravings —probably from the Magdalenian period— are extremely complex and deserve serious attention and studies. Tribes of nomad people moved around the “Perigord triangle” and came to visit this cave periodically. This theory is supported by the similarity of tools found in the archeological digs. 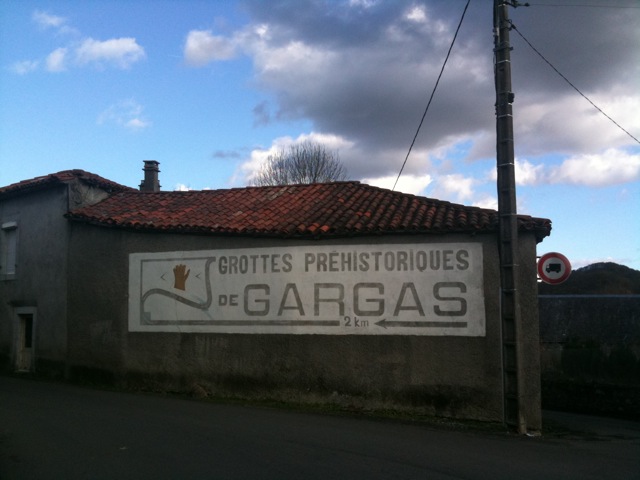 Personally, I was mostly interested in looking at  feminine representations and Yoan Rumeau was extremely kind to tailor the visit according to my interests.  All of these representations are incredible, but the most breathtaking for me was a 5 inch natural vertical opening in the rock that has been reddened with  iron oxyde pigment. It looks exactly like a vulva: from the texture, to the wetness, to the bulging, to the color, it was intensely “real.” I will expand on this visit at another time but the  energy it gave off, plus the visual and scholarly information gathered fed my research & concerns about the Vulvic Space/Knowledge.  This project is inspired by the work of Carolee Schneemann and will include a manisfesto, paintings, texts & performance. Hopefully there will be more on this later. I want to thank Yoan Rumeau for his explanations and the way he so generously gave of his time. 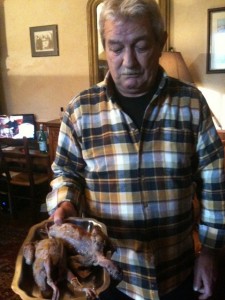 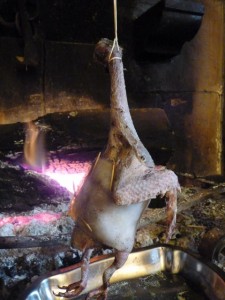 High from the visit I stopped at my brother Pierre’s — he and his partner Christine live quite close to the cave. In fact, Christine ran the cave’s restaurant  for years, though she is now retired and the restaurant is defunct. The photo with the Gargas painted sign is taken from their home. As it was 3:30PM when I arrived, Christine and Pierre had lunched already. I was really hungry and Pierre offered to cook me a palombe (ringdove or wild pigeon) in his fireplace. The birds had been shot on Sunday and brought as a present by his friend Henry Christophe, hunter and journalist. Pierre trussed the bird with a nice slice of lard, brushed it with some oil and piment d’Espelette —chili from the basque country—, salted it and then hung it in front of a roaring fire. 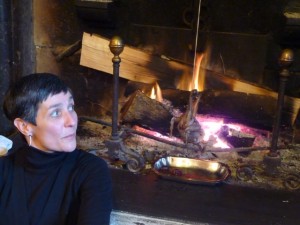 While we had some red wine we occasionally tapped the bird to make sure all sides cooked evenly.  25/30 minutes later we judged it done,  Pierre cut it in a half and said “all yours!” Christine took the pan that had collected the drippings, reduced the juices on the stove for a few minutes and poured it over my bird.

The cooking was simply perfect, moist, gamy but not too strong. I took my time, savored each bite and left the bones clean. I also had to be careful not to break my teeth on the tiny bullet. What a delight!

For dessert I had Christine’s scrumptious  home made quince jelly with fresh walnuts and then tea and a piece of local tourte —a kind of fragrant pound cake. I left the village of Aventignan (where the caves are) fully satiated with images, smells and tastes that made me feel like I had traveled through time. I was an ancient woman driving through the narrow valley where the white peaks defied the Prussian blue sky. 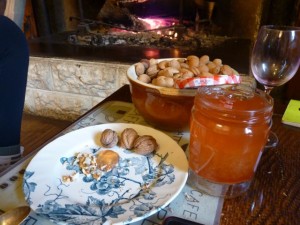