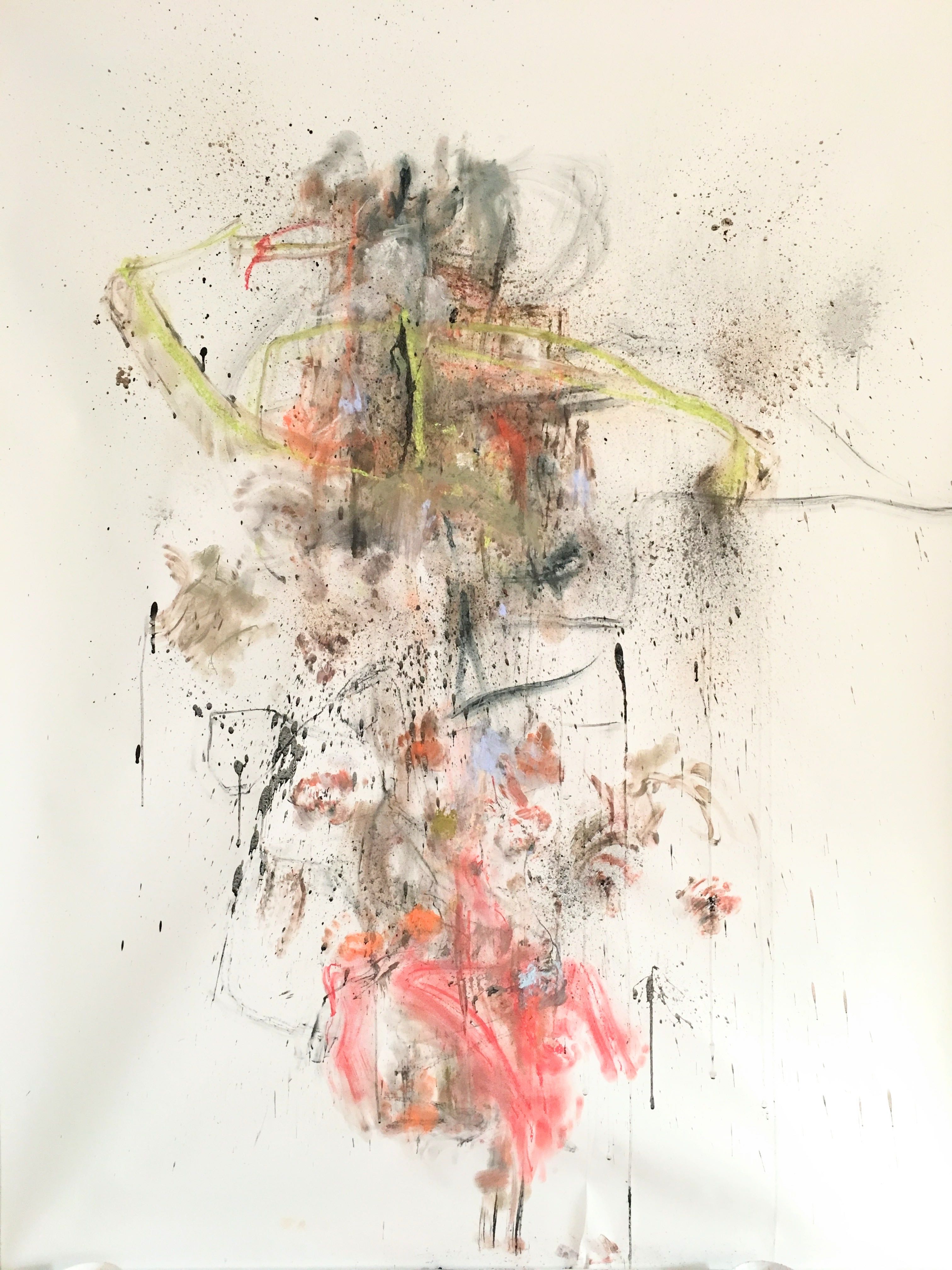 — While Nicole Peyrafitte is perhaps best recognized for multimedia performance and Pierre Joris for his poetry and his work as a translator, this exhibition of individual works & collaborations presents the fullest measure of their art to date. This multidisciplinary & cross-genre exhibit features performance, installation, & a retrospective of recent works arrayed across three gallery levels. 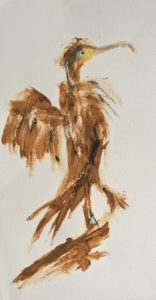 — For the occasion of the exhibition, and to accent its synergetic élan, Editions Galerie Simoncini released their collaborative text The Book of U / Le livre des cormorans in both a bibliophile and a paperback edition.

— You may start or end with any of the three floors, though obviously coming in by the front door of the first floor today at 4 p.m. the visitor will be confronted with the last of a series of live performances during which Peyrafitte creates new action paintings while Joris reads from The Book of U / Le livre des cormorans, which, in fact, is translated and illustrated by Peyrafitte. In & through their creation, these “action  paintings” explore kinesthetic experience — the 6 created at the start of this exhibition, as well as several earlier ones, can be seen on this floor & from outside the gallery.

— In the basement floor’s “Domopoetic Zone” the visitor encounters Peyrafitte’s installation of Joris’ literary universe, a gathering & display of the complete set of his publications, which includes some sixty books & chapbooks published over the span of nearly fifty years. Juxtaposed to these volumes of poetry, essays, and translations are the artworks created by Peyrafitte for a number of the books since their first meeting in the late 1980s. Also displayed are twelve original videos on Joris’ life and work. Two armchairs invite the visitor to sit down & peruse a second set of Joris’ books &/or watch the videos.

— On the Second Floor a series of works — drawings, pastels on paper, carnets, & multi-media assemblages from 1995 to present — show the range of Peyrafitte’s graphic & painterly work, be that in complexly composed fold-out notebooks or in serial paintings such as the Bi-Valve & Bourg d’Oueil series or the earlier Bach Cantata suite. A few of these works also connote the collaboration between artist & poet.

Some Notes on Domopoetics:
If the current show is not an exhaustive view of Joris & Peyrafitte’s collaboration, it is however certainly the most complete such presentation to date — as far as visual work & poetry is concerned. What it leaves out is work related to such areas as live, improvisational music & language, & food. To help explain the term “domo-poetics” (from “domus,” latin for house, & “poetics” the art & act of making) here are its authors’ takes:

Domopoetics is our attempt at a practical synthesis & presentation of nearly three decades of shared artistic & domestic practices. The word was coined after returning from one of our long walks along the shore of Coney Island/Brighton Beach. That day we both wrote a text, and when we read it to each other we realized that they had totally different perspectives — Nicole wrote on the elements, Pierre on the people peopling them. The term domopoetics has grown to encompass all aspects of our artistic and domestic matters fueled by our rhizomatic motions & distinctive rhythms. If they contain oppositions & contradictions, these are never “solved” by dialectical Aufhebung (we are too Deleuzian for that) but domo-poetically transformed in the alchemy of loving collaboration into contraries, given that — as William Blake wrote — “without contraries there is no progression.”

Or, as we put it in the post-face to the Book of U / Le livre des cormorans: