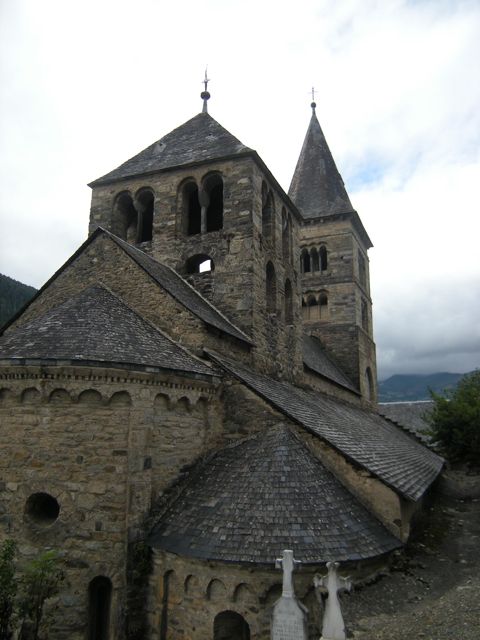 A little culture before briefing you on more food extravaganzas. We are getting ready to go to Pierre Joris’ induction into the “Ordre Pacifique et Souverain de Tastos Mounjetos” or in short: The Pacific Order of the Bean Eaters! My father is a founding member and I was inducted in  1992. This year I will be the godmother of Mr. Brunet who is a scholar in local history. We will certainly report more on the event; meanwhile enjoy the beautiful engraving of a Romanesque gem. The induction starts with a parade in the streets of the town at 4PM and is followed by a banquet attended by more that 300 people. For sure we will eat the “Pistache” — a bean stew with mutton and fresh porc rind.

This is one of the most beautiful Romanesque Churches (11th – 12th cent.) of the Central Pyrenees. It is situated in the village of Saint Aventin about 7 kms west of Luchon on the road going towards the Col de Peyresourde that you might remember if you follow the Tour de France.

There is a version of the legend:
Saint Aventin was an 8th century hermit who had been imprisoned by the Sarrasin invaders in the tower of Castel-Blancat situated on the facing slope of the valley. He freed himself and jumped over the valley to land on the site where the church is established today. He was recaptured and this time decapitated. He picked up his head and walked to the place where is tomb is said to be today. His cult is also celebrated on the Spanish side of the Pyrenées.