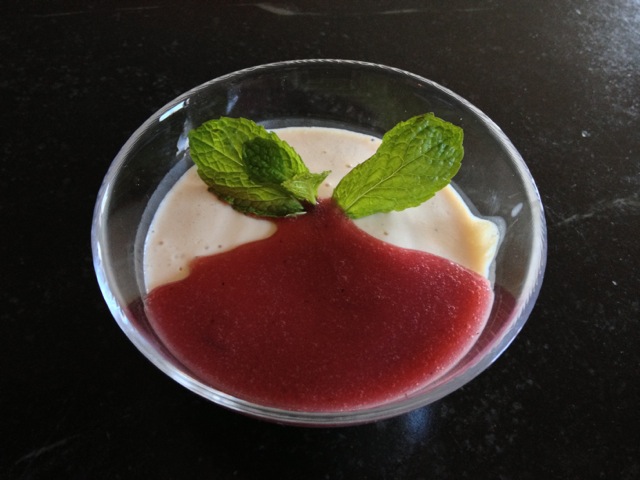 I am getting the hang of cooking low glycemic index meals —more on that coming up, since it will be the focus of my cooking for a few months. The menu featured today is my best so far. It happens to be vegetarian but I can assure you that it will satisfy even the staunchest meat eater. The delicate flavors & the filling qualities provide total satisfaction. 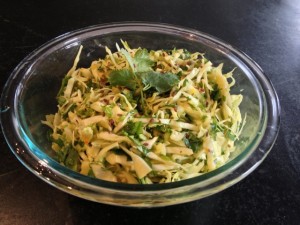 If you have read the previous post you know that I have beautiful turmeric from Hawaï. This coleslaw recipe is a low glycemic slaw variation that work quite beautifully with the Fragrant Chickpea Veggie & Shitake Stew.  It is only slightly different than the one featured in Passion Cabbage. 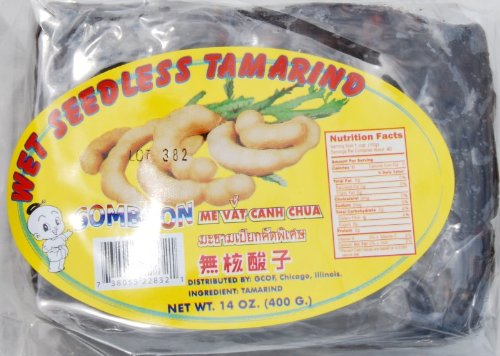 Finally a tofu pudding that is really good! I have been trying for months & at last here is one worth sharing. First I made tamarind paste with wet seedless (not totally!) tamarind. Tamarind doesn’t have a super low glycemic index but first, little is used & second, it is supposed to be very good for the liver. The process is a little tedious but worth the effort since it can be used in many other dishes —e.i: simply add to goat milk yogurt, morning cereals or to make the famous Pad Thai.

Tamarind paste process:
Soak one 14oz package in equal amount of warm water. Let it sit for a few hours. Once rehydrated work it with your hands to remove veins & seeds. Blend in food processor until smooth; keep in a glass jar in the fridge. For our purpose you will need only one or two tablespoons.

Pudding:
Put the desired amount of tamarind in a small pan, add a little water, heat to medium heat & add 1/2 package of plain gelatine; let it sit.
Meanwhile, in the food processor add:
1 package of organic silken tofu (1lb)
1 sunlime juice (this is a new kind of lemon that appeared at the ParkSlope foodcoop, if you don’t find it mix lemon & lime juice . The sunlime looks and tastes like an hybrid of the 2)
Freshly ground  cinnamon & nutmeg
Few drops of stevia (careful — too much gives it a terrible taste)
Add the tamarind mixture to the tofu mixture and blend thoroughly.
Pour in glass ramequin & let it set in the fridge for a couple of hours.
Serve with fresh blueberry mint puree (blend fresh blueberry & fresh mint in food processor, strain and pour over the set pudding) 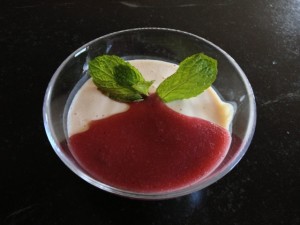 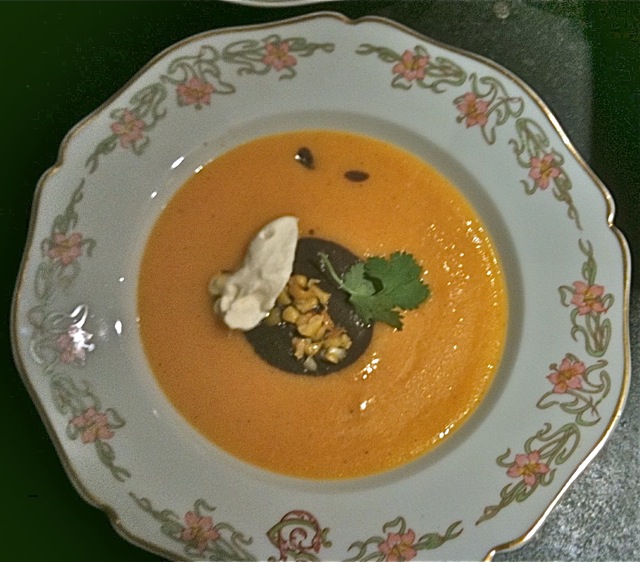 I am back from a wonderful trip to the Pyrenees and a short visit to Paris. I arrived just in time to dive into the kitchen to prepare our Thanksgiving dinner. Husband, older son & daughter in law had been very efficient on getting all the necessary ingredients. They also took charge of brining & smoking our 14 lbs organic turkey — it turned out delicious. Joseph —the older son— made the best oyster dressing he ever made for us; he has been improving the recipe we have used for a few years and I will pass it on one of these days. I will not get into all the details of our dinner as I have a few deadlines coming up, but the one thing I will share from our  2010 menu is our Three Sisters Soup. There are many ways of making this soup, and I have made it many times, but I do think this year’s version is the best so far.

First, a little light on the origin of the name. The soup is named after the Native American technique of growing maize, beans & squash together:

From Wikipedia, the free encyclopedia

In one technique known as companion planting, the three crops are planted close together. Flat-topped mounds of soil are built for each cluster of crops. Each mound is about 30 cm (1 ft) high and 50 cm (20 in) wide, and several maize seeds are planted close together in the center of each mound. In parts of the Atlantic Northeast, rotten fish or eel are buried in the mound with the maize seeds, to act as additional fertilizer where the soil is poor.[1][2] When the maize is 15 cm (6 inches) tall, beans and squash are planted around the maize, alternating between beans and squash. Milpas are farms or gardens that employ companion planting on a larger scale.[3]

The three crops benefit from each other. The maize provides a structure for the beans to climb, eliminating the need for poles. The beans provide the nitrogen to the soil that the other plants utilize and the squash spreads along the ground, blocking the sunlight, which helps prevent weeds. The squash leaves act as a “living mulch“, creating a microclimate to retain moisture in the soil, and the prickly hairs of the vine deter pests. Maize lacks the amino acids lysine and tryptophan, which the body needs to make proteins and niacin, but beans contain both and therefore together they provide a balanced diet.

Native Americans throughout North America are known for growing variations of three sisters gardens. The Anasazi are known for adopting this garden design in a more xeric environment. The Tewa and other Southwest tribes often included a “fourth sister” known as “Rocky Mountain bee plant” (Cleome serrulata), which attracts bees to help pollinate the beans and squash.[4]

2009 Native American dollar reverse with Three Sisters on it

In the past I made three different soups and served them together. This year I decided to make only the back bean and the butternut squash soups and serve the corn as a garnish on top. This added a pleasant texture to the dish.

Black Bean Soup:
I had some cooked black beans in my freezer. I sauteed one diced onion, added one jalapeno, salt, and a dash of Melinda sauce (for the chipotle pepper taste), added the beans and water. Let it cook for one hour.  Then I blended it with cooking liquid. The consistency should be a little thinner than a smoothie.

Butternut Squash Soup:
I peeled a butternut squash and cooked it in salted water. Meanwhile I prepared a bechamel sauce:

Melt the butter over low heat in a heavy sauce pan. Add all the flour, move away from heat and stir briskly until smooth. Add the milk & put back on the stove, stir continually with a wire whisk to prevent any lumps —this is a basic sauce that you can use for many other recipes like macaroni and cheese, or any other gratins, lasagnas etc.

Once the squash is cooked, blend it in a food processor with enough cooking liquid to obtain a  thick consistency. Return to a pan and add as much bechamel as you like. Season with salt & pepper.

Corn kernels:
In a pan melt 1 tablespoon of butter. Add 2 cups of corn kernels, salt & pepper. Glaze them until golden and a little crunchy.

Keep your soups and the corn warm — I do keep everything in a chef pan double boiler mode— prepare the other garnish: cilantro, whipped cream & finely chopped jalapenos for the people who can handle it.
Once you are ready to sit down to dinner set up your plates.

1- Pour the butternut squash soup first.
2- The bean soup in the middle of the squash soup
3- Add a dolop of whipped cream, cilantro, chopped jalapeno and voilà!  & bon appetit! 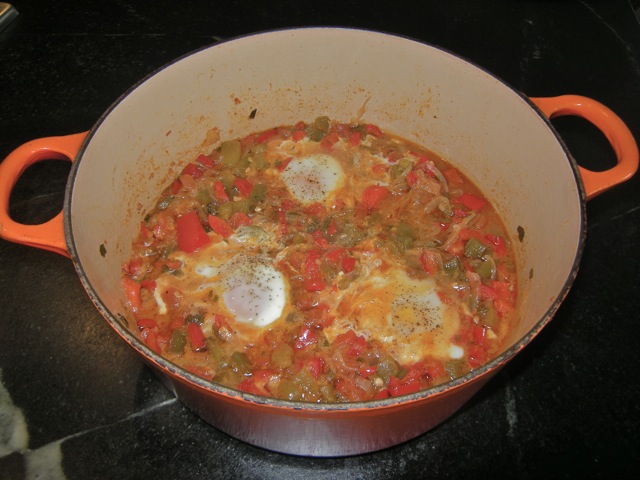 I assisted Pierre in making Tchakchouka, a dish he remembers from his time in Algeria. It is a kind of ratatouille — but to me it is the better dish. The recipe appears in many Mediterranean traditions. I have found Algerian, Jewish, Tunisian,  Moroccan & Kabile recipes, all have pretty much the same ingredients with variations of meat or eggs — at times coming close to the famous huevos rancheros! We made two versions: one with eggs and another without, which we served with lamb chops.  You can eat tchakchouka hot, luke-warm or cold, as you prefer, or as the weather suggests. You will not regret the effort and can make big batches of this super delicious fragrant summer dish. Don’t wait, make yours now! 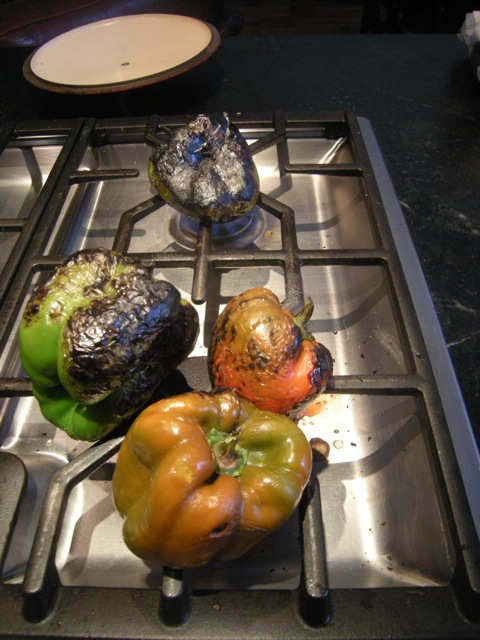 *Roast the peppers over your stove. When charred wrap them in newspaper. Wait until they cool off & then peel them, discard seeds, cut lengthwise into thin strips.

* Heat the oil over a medium flame in a deep skillet. Stir in the paprika & ground coriander seeds and let cook slightly to color the oil, about 10-15 seconds.

* Add the onions, sauté until onions are translucent and wilted but not browned, about 4 minutes; add garlic, cook for another minute or so.

* Add tomatoes and bring to a rapid simmer. Add peppers, parsley & fresh coriander, water and salt and pepper. Reduce heat to low, and simmer, covered, for about 15-20 minutes. Add more water as needed.

* If you want to add eggs, form four small indentations in the simmering peppers to hold the eggs. Crack eggs, one by one, into a small bowl and slip each egg from the bowl into an indentation.

* Cover and simmer another 10 minutes or so until eggs are cooked through.
Voilà! & enjoy! 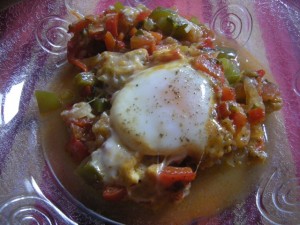