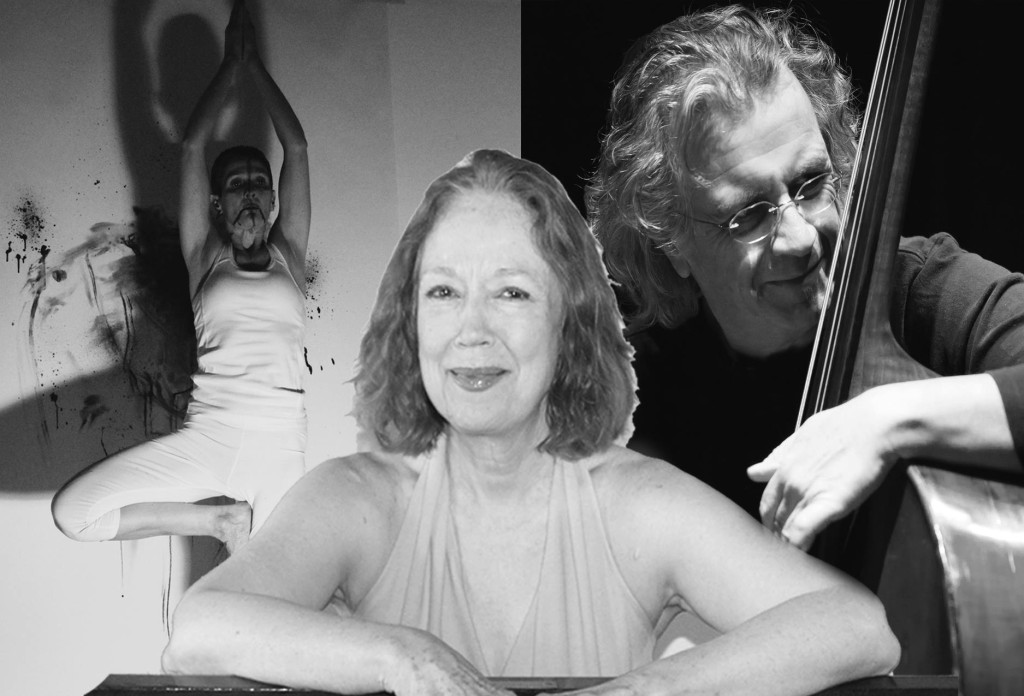 SUNDAY OCTOBER 4 at 8:30PM
I am so much looking forward to this event. Please join us & bring your friends!
For the third installment of Cabaret Hérétique, I have invited Michael Bisio (bass) & Connie Crothers (piano) for a voco-musico-poetico-visual-comestible improv performance. The focus will be sentience as the core concept of our improvisation.
I am thrilled to be performing with Michael Bisio’s extraordinary tonal beauty & intensity of his very personal musical language of his double bass, & legendary Connie Crothers’ magical and brilliant piano promising spontaneous composition balancing traditional patterns & free improvisation.

Bio:
Michael Bisio, bassist/composer, has eighty-five recordings in his discography, twenty -four of these are split evenly between leader/co-leader, ten of them document his extraordinary association with modern piano icon Matthew Shipp. Michael has been called a poet, a wonder and one of the most virtuosic and imaginative performers on the double bass. Nate Chinen in the New York Times writes : “The physicality of Mr. Bisio’s bass playing puts him in touch with numerous predecessors in the avant-garde, but his expressive touch is distinctive;…” As a composer Michael has been awarded nine grants and an Artist Trust Fellowship.Collaborators include Matthew Shipp, Joe McPhee, Charles Gayle, Connie Crothers, Whit Dickey, Ivo Perelman, Barbara Donald, Newman Taylor Baker, Nicole Peyrafitte, Rob Brown, Sonny Simmons and Sabir Mateen.
http://michaelbisio.com/

Connie Crothers, pianist, has lived her musical life as performer, recording artist and teacher releasing the feeling—her source—into the music which realizes her range of expression, her virtuosity based in her love of the instrument and her desire to discover everything she can hear and imagine through spontaneous improvisation.
Connie was selected for a week residency at The Stone, from August 19 to 24 2014. She performed twelve sets, each set with a different lineup of musicians. “Concert in Paris,” a solo CD of selections from a solo concert performed in Paris, was released on the New Artists label in August. Earlier in this year, her quartet, with Richard Tabnik on alto saxophone, Ken Filiano on bass, Roger Mancuso on drums, released “Deep Friendship,” New Artists, their concert at William Paterson University. The quartet celebrated the [Connie Crothers bio continues…]
CD release in a performance at Roulette in Brooklyn. She often appears at the Vision Festival.Feature articles have appeared in Jazz Inside, Knack (Belgium), Jazz Podium (Germany), Cadence, The Village Voice, All About Jazz New York.Connie Crothers studied with and taught in association with Lennie Tristano. He wrote, for her first record, “Perception”: “Connie Crothers is the most original musician it has ever been my privilege to work with. ”Connie was a guest on Marian McPartland’s radio show “Piano Jazz.” She was honored by the Jazz Museum in Harlem by being featured in their series “Harlem Speaks.”In the centennial issue of Cadence, she was selected for the list of the most important and influential musicians in the last twenty-five years of the 20th century.
http://www.conniecrothers.net/