Hilh de puto or OMG! I had so much fun with this project. Truly a spontaneous affair. We had been so wrapped up in our respective working spaces that when dinner time came around Pierre & I realized that neither of us had roasted the chicken. He started by serving the aperitif and plugged WBGO via his iPhone into the stereo system. In a way I was happy we hadn’t roasted it because I wanted to film the cutting up of a chicken as I wanted to post it on the blog. While I set up the camera the radio played a piece that really caught my ear. I couldn’t place it in time; the pianist was so free and at the same time the arrangement was traditional. I got so excited, & high listening to this music — & no! I was not drunk, I just had one sip of my glass of wine!

It was “Luyah! The Glorious Step” the first track of  Cecil Taylor Quartet’s CD Looking Ahead

recorded in 1958. Besides the maestro himself, the personnel includes Earl Griffith on vibraharp, Buell Neidlinger on bass, and Dennis Charles on drums. Well, I went on line and ordered it immediately, I had to have it.  The 1958 liner notes are by Nat Hentoff and conclude by saying:

Cecil hasn’t worked out all his style yet, but what he has already done is important and makes him, in one sense, ‘in the avant garde of everybody,’  as Martin Williams puts it. Most important is his emotional message. Much of the musical history of the Negro in America is in his work, but not as an anthology. He’s a new user of that basic language with his own additions to make.

Yeah! Emotional message for sure. I could feel it through my entire body.  Also, for me this recording sheds a light on how the “avant garde” music I love so much happened.  Never had I  heard such an absolutely clear articulation of both ideas and form — and all the while I was  cutting up my chicken!  A metonymic epiphany of our “domopoetics” that feeds on explosive & uninhibited  energies. And to counter-stretch  with a metaphor (you must see the video to get that one) it is unequivocal to me that Cecil Taylor knows about finding the joint & firmly cutting down through it! 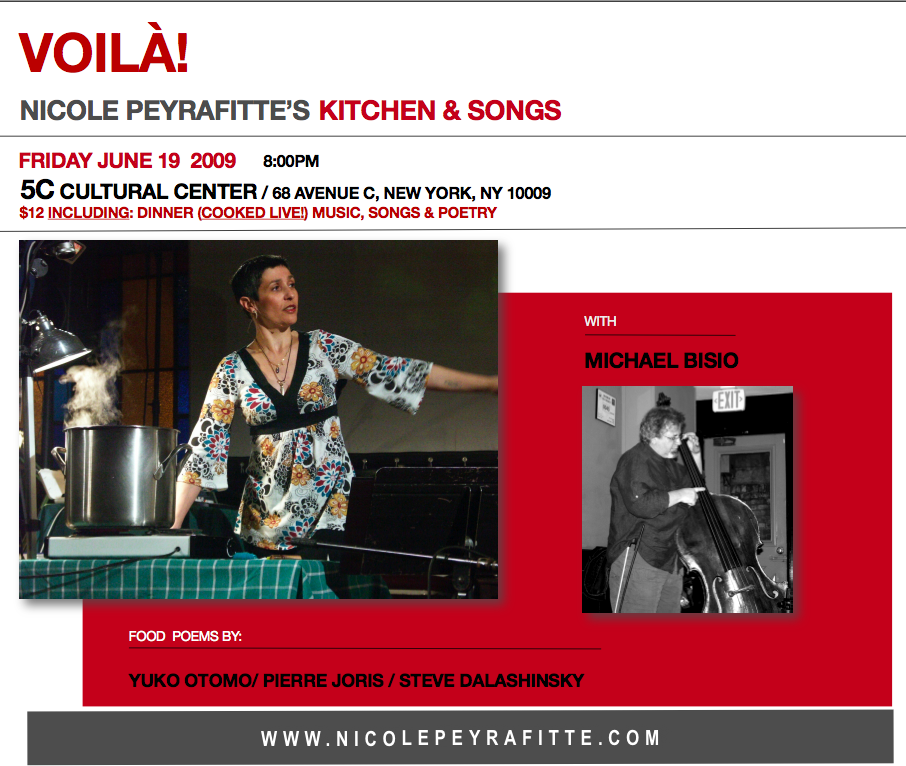 I’ll set up my stage/kitchen at 5C Café. Not only Mike Bisio and I will perform from our repertoire of songs and contemporary poetry but I have also invited:
Yuko Otomo she will read  her Paris poems.
Steve Dalashinsky & Pierre Joris will read food poems.
and
I will cook you a 3 courses dinner (mostly live cooking!) of  seasonal and mostly vegetarian fares.
It is reasonably priced for dinner & entertainment: $12 at the door
Wine & beer extra available at the bar.
Details:
-“First come — first served” basis (limited to 30, no reservations)
-One menu (3 courses, only one option available and mostly vegetarian)
-We will start on time!

Looking forward to see you!

I am excited to launch :

Parties YOU host with moi, in your own home, your own kitchen!
Please visit the website : http://voilanicole.com/
and pass it on.
Merci!

Then, below you will find a video sent out by Michael Pollan. He is the author of many books and my favorite is: The Omnivore’s Dilemma: A Natural History of Four Meals. I have previously posted about Michael Pollan and to find many recordings of his talks click here.

About the video: As Michael Pollan states in his note,there was very little time to talk about this so serious problem. But from the introduction it sounds that Michael Pollan gave a lecture before and then came the debate.

On Wednesday I participated in a panel discussion with Hugh Grant, the president/CEO of Monsanto, and Sonal Shah, a development expert at Google.org. It was moderated by Larry Brilliant, of Google-org, and held on the Google Campus. It was just posted on Youtube. As you can see, we only had 30 minutes and barely scratched the surface, but it’s rare that Monsanto engages with its critics, so something you won’t see everyday.”Creating a World That Can Feed Itself” Let me know what you think. –Michael