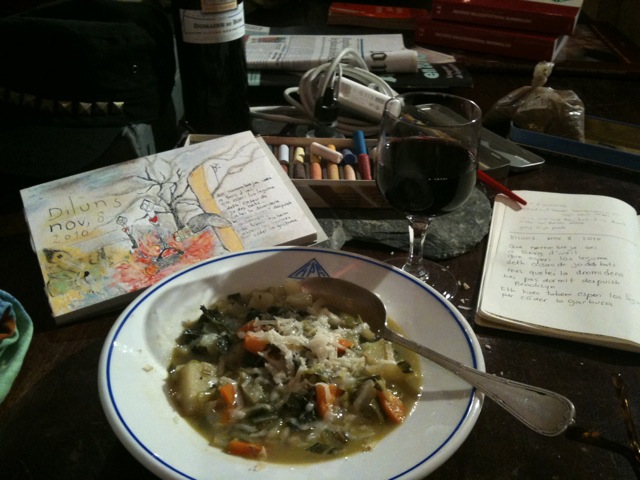 I arrived Monday afternoon in Bourg d’Oueil after a long but pleasant trip. My Pyrenean home is closer to Spain than to Paris and I am not kidding: it takes 15 minutes by car to reach the Spanish border and about 8 hours to reach Paris!  My travels began Sunday at 1:30 p.m. from our Brooklyn home and I finally reached Bourg d’Oueil on Monday at 3:30 p.m. local time or 9 a.m. Brooklyn time. After taking two planes, two buses, and two car rides I reached our little house in the village at the far end of the Valley. As my intention was to cook a soup on a live fire, the priority was to light the fire.

I had planned to get some veggies in town before my last climb up to the mountains. I arrived too late to get to the market, so my only option was the local supermarket. The offerings where pretty sad and I couldn’t come to terms with buying any of these mass produced veggies. I placed a call to my good friends Joseph & Paulette asking them if they had anything left in their Bourg d’Oueil garden. They had already winterized the garden but had plenty of veggies in their Luchon garden. Not to worry, said Paulette, Joseph will bring me leeks, celery, potatoes, chards, carrots & onions later on. Great! I can always count on them. I did hit the cheese counter and was pleased to be able to get a couple of local cheeses. 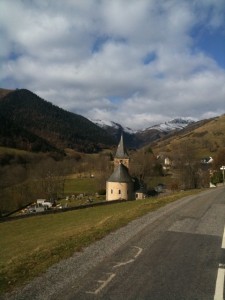 The most delightful part of the trip is the 17 kms climb from Luchon to Bourg d’Oueil. Despite the weather forecast there was neither rain nor snow but a slightly overcast sky that let me have a partial view of my mountains. Driving through the villages triggers images: In Benqué Dessus et Benqué Dessous,  it is Jules’ face, the Fournier’s house, and the cromlecs above them. Before Saint Paul d’Oueil,  the sign for Saccourvielle brings up my friend Emingo, who makes the best goat cheese I ever had, and Mme Labry, a writer who was my French teacher in high school. In Mayrègne,  I look at the old “kiosque” where I use to go eat crêpes in the summer as a child; I also think of the recently deceased mayor who was key on having me perform the Bi-Contimental Chowder/ La Garbure Continentale in the Valley.  Then comes Caubous, Cirès, and at this point I can’t think of anything else than trying to get a glimpse of the Peirahitta (my totem!)  that sits at the pass of Pierefite. And finally I reach Bourg d’Oueil the very last village at the end of the valley. I park the car and start schlepping my stuff to the house. It is almost impossible to reach the house by car, the street is so narrow,  evidence if need be that this place was not build for car traffic!

After a quick tour of the house, I lit the fire — we are at 1400m or 4600 feet  here, so the air is nippy on this November afternoon. Once the fire was going strong I started opening my stuff, got my art supplies out, opened a bottle of wine, got the cheese out and waited for Joseph et Paulette who brought the veggies at around 5:30 p.m. — they had added a jar of duck fat and one of honey, all home produced. While the soup was cooking I worked at a drawing that includes some attempts at writing in Gascon. And then, accompanied by the sound of the stream running under the house, the crackle of the fire and the occasional ringing of the church bell, I savored my soup. The flavors are indescribable. They call on all my senses and the experience is totally gastoorgasmic!

Sauté all the vegetables in order in the duck fat then add water and let cook until done. The soup is even better the next day, and of course feel free to add other veggies like beans, turnips, cabbage….

Now can you smell? Just try: