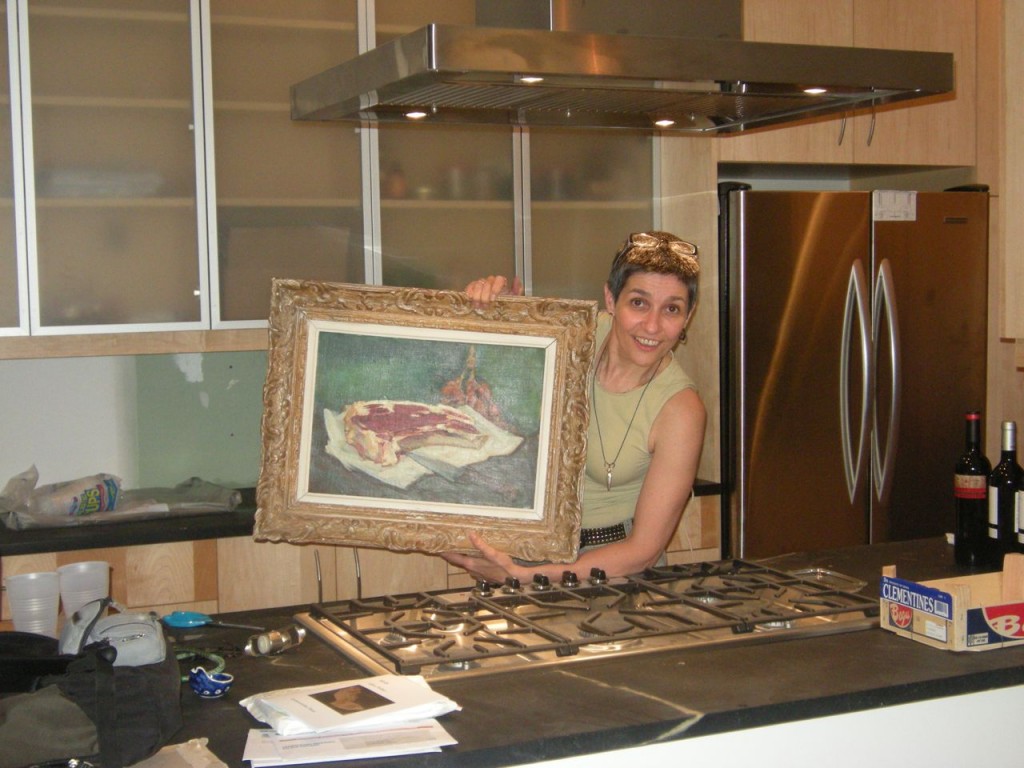 Waiting for the day to break & still in the sleep/wake up zone, this morning I am trying to count how many times I moved.  Probably about twenty times, some moves bigger that others. I will never catch up with Pierre who moved about thirty times. So, yes! We do have some experience in the field but still, I find the process gruesome. I never use this word but that’s the qualifier that comes up when I think of moving.  Moving is believed to be one of the three highest stress related events —after the death of a relative and a divorce. No matter how many times you do it, the physical, mental & emotional demands are high. I am glad that I could keep up with my yoga routine in the early morning and avoided eating too much junk food while being without a functioning kitchen.

This time we hired movers and despite the one day delay due to the truck blowing a tire on it’s way to Albany it went rather well. Our crew from Dumbo movers was the most courteous, efficient, educated and eclectic bunch you can think of. The crew was lead by Vladimir, a Serbian engineer with a master in transportation, he was helped by Dan, an unemployed Wall Street banker with a master in Real Estate Banking and a real Tibetan monk who had to escape Tibet last summer after the riots. I really should have taken a picture of these guys, but by Friday morning I was fried and survived the last three hours while in a liminal  mental & physical space. Not only was I overwhelmed by the unloading and arrival at the new place but the super was giving us a hard time because Friday July 3rd is considered a holiday, according to him! All this to say that I didn’t get to say properly goodbye to the team and tell them how great they were.

Anyhow, we are in the new place in Brooklyn and surrounded by boxes.  Pierre’s 10000 books (yes! 4 0’s) are patiently waiting to find their place on the beautiful new shelves. The kitchen is functioning enough to make some food and I have started opening up  some of my heirlooms. The first item I unpacked was my undated oil painting by Henri G. Cheval. I have had this painting since 1981 and no information on it, except for one internet entry that tells that Henri Cheval was friend with Doisneau, Antoine Blondin and that generation of French artists. It sounds very plausible, as this painting was given to me by André Bellut who was the chef and manager of the restaurant of the  Paris paper “Le Parisien Libéré”. André Bellut, who was a close friend of the family, knew that crew of artist-writers pretty well. André was an amazing chef, every summer he would come to spend a few weeks at my family hotel. He was like an uncle, he would always take me around either to gather wild berries, visit the fountain salmon farm, eat crêpes at L’Hospice de France, and he always talked about food. André died in the mid 80’s and I am glad he gave me this piece to treasure these memories. I often find myself looking at the painting especially when searching for culinary inspiration, and it never fails me: one glance and ideas flow! Well that’s it for now, I must return to unpacking. More soon!
Oh! one more thing: we were greeted  by 3 rainbows over Brooklyn! and there is 2 of them. 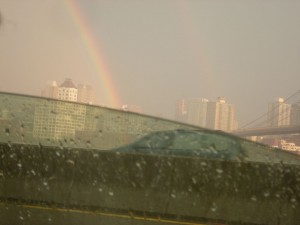 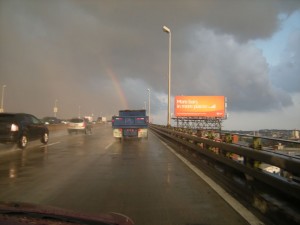