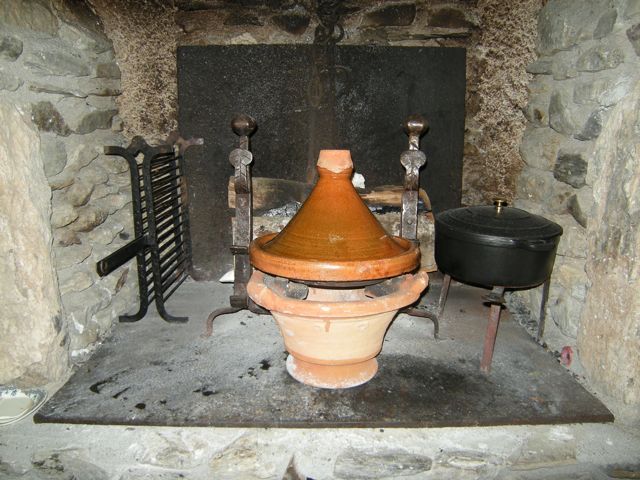 A few years back Pierre and I bought a kanoon — from the arabic:  قانون, kanoûn,  qanoûn or kanun— at a Luchon street fair. It is a North African clay brasero for cooking with charcoal. It makes great tagines and it is very convenient when we have no time to make a big fire in the fire place or when the weather is really hot.  Monday I used it to cook our entire meal that consisted of local offerings from the Luchon market:
Hors d’Oeuvres:
Hure de porc or pig’s head paté (Martial Vargas)
Paté de truite with chives (Pisciculture d’ Oô)
First Course:
Hearts of duck salad (Lazorthes, a.k.a. “Caniche”) 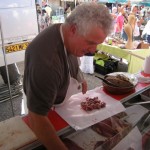 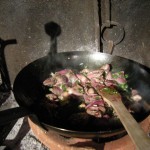 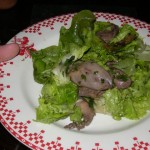 Main Course:
Mountain trout from the pisciculture de Oô (see last year’s post for another recipe made with these excellent trout) 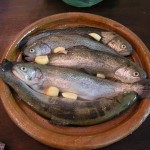 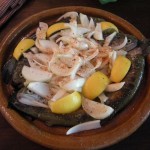 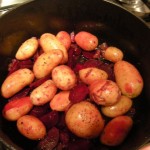 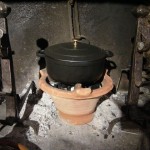 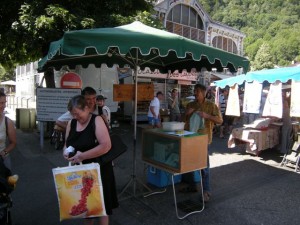 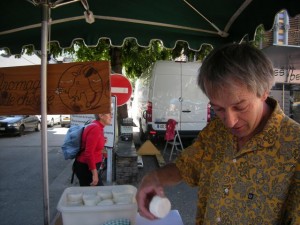 Pierre fired the kanoon with lots of charcoal to have enough to cook the whole meal in it.
First I cooked the veggies in a cast iron pot. Instead of using oil I used the incredibly tasty salted fatback the Jammes gave me as a present when I went to get the lamb (see previous post). 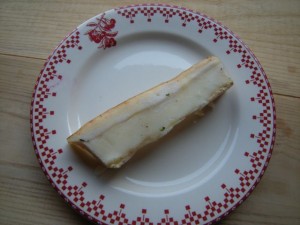 I rendered half a cup of fat and added potatoes, beets, salt & lots of black pepper and set it on the kanoon for about ½ hour. I added the beans later, as they take less time. When cooked, I reserved the veggies and set them aside.
Meanwhile I had cut the duck hearts in half. These hearts where beautiful. They were bright red & so fresh. I placed my special open fire frying pan on the kanoon and again melted some fatback. Once the fat had rendered and the pan was very hot I added the hearts and fried them until cooked but still pinkish. Be careful: overcooked hearts get unpleasantly rubbery. At the end I added a generous persillade and served them warm on top of a very lightly dressed salad.
While we ate the salad I tightly fit five trouts in the tagine dish. I coated the trouts with olive oil in which I had soaked garlic cloves and added the cloves too. I topped the whole thing with “new” onions, one quartered lemon, salt and & piment d’Espelette —that is, a very popular chili that grows in the the Basque country and is fragrant and not too spicy. The trout cooked while we ate the  delicious hearts of duck salad. We waited for them a little, but who cares when the Tariquet Rosé & the conversation are flowing!
I very much like the combination of the hearty veggies and the delicate trouts, thought the trouts could have been a little spicier.
We opened the red Saint Mont wine to accompany my favorite local goat cheese made by my good friend Alain Garcia (see picture above). The dessert was a nice conclusion to our meal — sorry I didn’t take any pictures but I was too involved with the company!
Voilà! for now as I am off to visit my dad (87!) at the local physical rehab center where he just arrived after  successful complex back surgery that will hopefully  allow him to walk better… I teased him today that if he keeps progressing as fast as he does, he might even be ready for soccer season! (before being an hotelier & a politician — mayor & senator — he was the regional star soccer player)!
More soon and thanks for following our summer adventures! 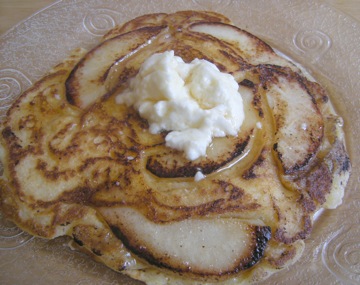 Pierre made my “Tasty Fluffy Golden Pancakes” batter for breakfast this morning. As we were meated out from last night’s BBQ dinner, we opted for a lighter option than eggs and bacon. After surveying the fridge and the fruit basket the pears and the fresh (plain) goat cheese revealed themselves as a tasty option. And it was delicious!

Recipe:
Use batter recipe from Tasty Fluffy Golden Pancake blog.
Peel and cut pear in thin slivers.
Melt one teaspoon of butter in the pan for each pancake (I used a crêpe pan to flip it more easily).
Arrange the pears and let them golden for a few minutes.
Pour the batter over them, cook like a regular pancake, flip it and cook the other side.
Serve on a warm plate.
Place a dollop of goat cheese (room temperature) on top.
Pour warm maple syrup over it.