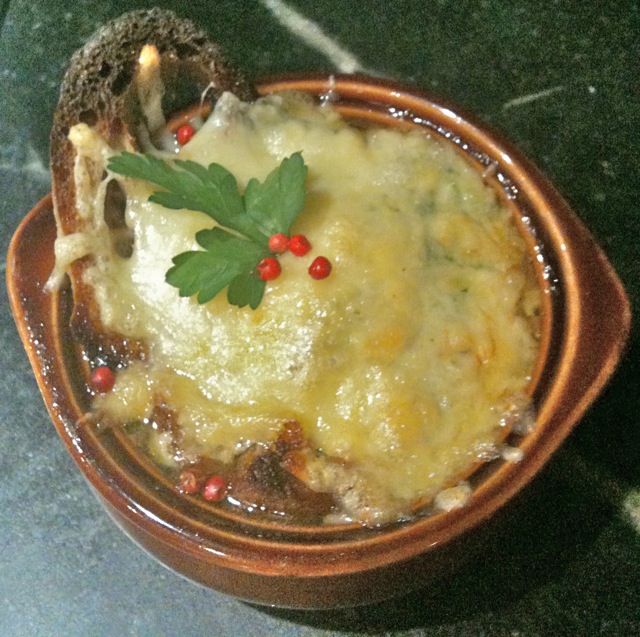 My dad always calls it a gratinée, but it is generally called une soupe à l’oignon, here in the USA it is mostly known under the name “French onion soup.” Whatever you call it, it is a delicious and incredibly restorative soup.  Actually they used to serve it at my dad’s night club at the wee hours when many customers would have it to soak up the booze and line their stomach for more drinking. I used to make it on New Years eve when we had a party at the house and serve is at 1 or 2 am. It really makes a difference in the quality of your hangover — trust me!
Well, this time it was not about a hang over but about the carcass of a roasted chicken that had been picked clean of all its meat and was sitting in the fridge. I threw it in a pot, covered it with water, 1 onion, 1 carrot , 1 bouquet garni. When it came to a boil, I let it simmer for 1 hour, then strained the broth and let it cool. This type of broth can be used as a base for many soups or sauces, but tonight as we were waiting for another snow storm I was craving my onion soup. (You can substitute the homemade broth for some store bought stock & if you are vegetarian you can use an Organic Mushroom Broth)

In a soup pot melt 3 tablespoons of unsalted butter with 1 tablespoon of olive oil.
Meanwhile slice 2 large sweet onions very thin.
Cook the onions over moderate heat until they are golden & almost caramelized. At this point some recipes call for sprinkling a tablespoon of flour to give the soup a thicker consistency. I don’t, because I like my onion soup lighter, plus I feel that the bread that will be on top provides plenty of thickness & starch once you mix it in with the soup, but I though I’d mention it as so many recipe do.
Add about 2 1/2 cup of broth, 2 teaspoons of brandy or white wine —that is my secret!
Season with salt, fresh ground pepper  and let simmer for about 1/2 hour. 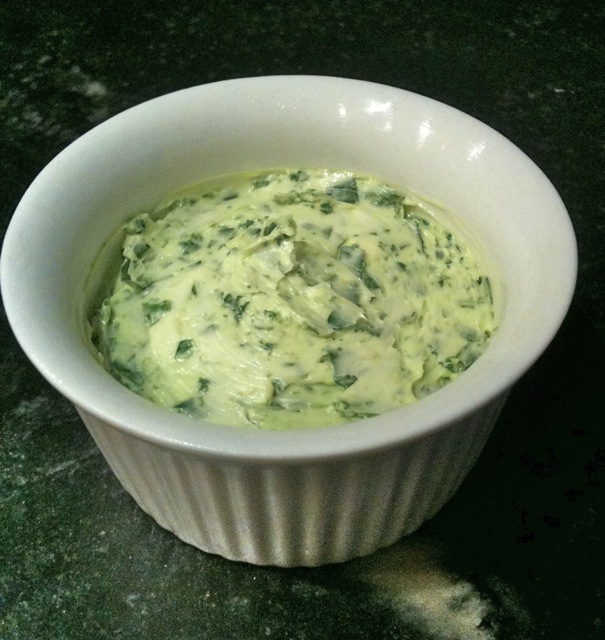 Meanwhile make parsley & garlic butter. In a food processor add 1/2 stick of butter, 2 cloves of garlic, blend well and add 1 cup of chopped parsley, mix it in for just a few seconds, do not over  blend once the parsley is in. Fill a little ramekin and save in the fridge. Cut a few slices of good country french bread, butter generously with the parsley & garlic butter. Fill two individual soup tureens with the onion soup, place the buttered bread on top, & top generously with grated —in order of preference— Gruyère, Emmental or Swiss cheese. Place the bowls under the broiler until the cheese is golden and bubbly. Garnish with a few pink pepper corn and a spring of parsley and Bon Appetit!